Facebook now has at least six different apps in its suite, including Paper, Messenger and Slingshot 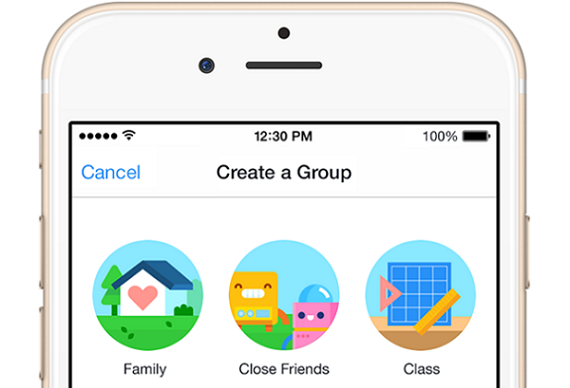 Mark Zuckerberg has been adamant about the fact that an official Facebook phone will never, ever happen. That doesn't mean, though, that the company doesn't want to to slowly, piece by piece, take over your phone. It's just going tp doing it in an unofficial way, by releasing a slew of stand-alone apps that start serving every function.

Have you noticed? Look down at your apps. How many of them are owned and operated by Facebook? It would be at least six by now, including the main app, if you downloaded them all!

Facebook's latest stand-alone app to come along is Groups, introduced on Tuesday. Groups are small number of people that a user may want to share information with, such as family or college friends, without sharing it with everyone else.

The idea behind Groups is to, in a sense, take the network back to its roots, before it had over a billion people on it,  and sharing an article meant countless others could see it.

When someone opens the new app, all of their groups will be put into a single place, with the most frequently used ones at the top. A new group can be started by tapping create, and the user can choose to get push notifications if they chose to.

The app also features a Discover tab, which will display groups suggested to the specific users based on Pages they have liked, groups theur friends are in and where they live.

The best thing about the new Groups app, though: it doesn't have to be downloaded. Unlike Messenger, which was decoupled earlier this year, meaning that users had to download it in order to have access to their messages, Facebook is not doing the same thing with Groups.

Facebook has been on a mission all year to separate out its services, and to create a suite of apps that would take over the functionality of a user's phone.

There is now talk that the company could also be releasing its own professional network, called Facebook At Work, that would provide workplace collaboration tools.

And, of course, there was the decoupling of Messenger.

Some of these apps have faltered: Slingshot is actually Facebook's second attempt to capitalize on Snapchat's success, with its previous app, called Poke, falling flat. Forcing people to download Messenger, though, has been a big success; the app has grown to 500 million users, up from 200 million in April.

The talk about Facebook has been, at least for as long as I can remember, how can a company that big continue to innovate? The answer now seems to be that it won't, but it will try to become ubiquitous by copying what others are already doing.  And it’s a plan that, it seems, will likely work.