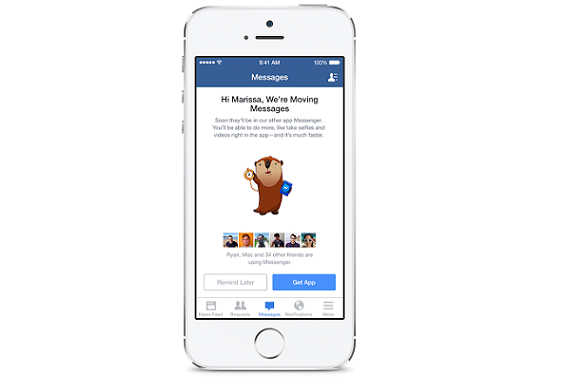 After Facebook's attempt to take over Android phones with Home earlier this year failed, the company took a different track to, pretty much, get to same place: it has been expanding its presence on mobile through a series of stand-alone apps, including Instagram, Paper, Slingshot and Messenger. The idea being that Facebook will, essentially, take over all aspects of your phone, from picture taking, to instant messaging.

Of course, that doesn't really work if those services are bundled inside the main app, which is why, back in April, Facebook announced that it would be testing out decoupling Messenger from a handful of, primarily, European countries to see how people reacted.

Apparently those tests went well, because now the company is doing to the same to users in the United States, it has been confirmed to VatorNews.

Starting this week, Messages will be moving out of the Facebook app and over to the Messenger app, so, for people who want to continue sending Facebook messages, they now need need to install Messenger. Usrs will still be able to see message notifications in the Facebook app, but they will have to switch between Facebook and Messenger in order to read them.

"In the next few days, we're continuing to notify more people that if they want to send and receive Facebook messages, they'll need to download the Messenger app," a Facebook spokesperson told me.

"As we've said, our goal is to focus development efforts on making Messenger the best mobile messaging experience possible and avoid the confusion of having separate Facebook mobile messaging experiences. Messenger is used by more than 200 million people every month, and we'll keep working to make it an even more engaging way to connect with people."

The company will not be springing thise onto its users: they will have several notices before the change takes place and will have opportunities to learn more about Messenger and its features. Eventually, though, they will simply be forced to make the switch.

For Facebook, this all has to do with making the experience simpler, and quicker, for its users.

There are over 12 billion messages are sent daily on Facebook, and the users on Messenger get their messages about 20% faster than those who have been using the service through the main app. They also reply 20% faster on the stand-alone app. They also send more photos, create more group messages and share more rich media (videos, stickers and audio clips.

Obviously this is a wise move for Facebook, as it tries to ramp up interest in its family of apps. In a recent conference call, Mark Zuckerberg compared Messanger to where Facebook was in 2006 or 2007, meaning it is primarily a consumer product, that is mostly free. That is because, he said, the apps have to be built up slowly and carefully.

"We've said in a number of comments that we think some of these newer initatives are going to ramp over time. We really do mean that, and we're serious about doing this the right way and building up these ecosystems. And I think for some of these other apps, we're just going to build all the infrastructure that we need to make it something thats scalable over time, rather than trying to have this be an impact you'll notice over the next short term period of time."

Taking Messenger out of the main Facebook app could  be a good way to get more people to use it, or they could simply choose a different messaging app altogether, as there are plenty of other options available.

This news was first reported by TechCrunch on Monday.