The fast-growing food-delivery service is becoming extremely crowded, and lucrative 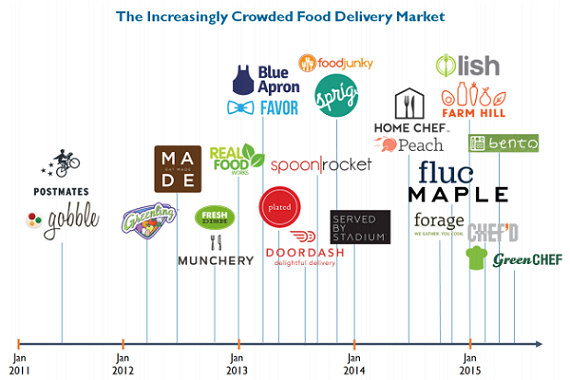 2015 is going to be remembered as the year that gourmet food-delivery absolutely exploded as a business to get into. Chalk it off to the advances in mobile, and the on-demand, must-have-it-now-but-must-be-organically-grown-chef-made-and-not-just-a-typical-pizza mentality of our generation.

Not only are we seeing every VC back their own food-delivery startup, we're seeing established companies trying to get in on the game.

The latest to see the opportunities in food delivery is Groupon, which announced Thursday that it has acquired food delivery marketplace OrderUp. Financial terms of the deal were not disclosed.

For Groupon, this acquisition has a clear purpose: to significantly boost the company's presence in the food ordering and delivery sector, which it says is currently worth around $70 billion.

Baltimore-based OrderUp, which was founded in 2009, gives Groupon the ability to hit the ground running in this space. The company has processed more than 10 million orders and is available in 26 states around the country.

“Online food ordering and delivery represents an untapped opportunity for Groupon and serves as a natural extension of our local marketplace,” Eric Lefkofsky, CEO of Groupon, said in a statement.

“The potential in delivery and takeout is apparent -- especially with the growth of mobile -- and OrderUp’s operational ability, coupled with Groupon’s engaged customer and merchant base, bring tremendous scale to the space.”

“Groupon’s reach and ability to connect supply and demand at scale make it the perfect destination for us to grow even faster and expand in our targeted local markets,” Chris Jeffery, CEO of OrderUp, said. “We look forward to bringing the thousands of great restaurants that we feature to hungry Groupon customers across the country.”

Going forward, OrderUp will continue to operate as a standalone brand, but it will get inventory cross promotion through Groupon’s marketplace and merchant pages. The company will maintain its current Baltimore headquarters, a spokesperson for Groupon told me.

Online ordering is so big that Internet orders, including mobile, are now on track to soon surpass order made over the phone. Five years ago, this would have been unheard of, with phone orders absolutely dwarfing those made online. Now they are practically even.

So it's no wonder Groupon is attempting the dive into food delivery. And it's not the only one.

In April, Uber launched UberEATS in Barcelona, teaming up with Plateselector, a Barcelona-based food guide, and said was working with "the best local restaurants in Barcelona to create a changing selection of lunch and dinner meals that you can receive in under 10 minutes."

Square is also getting in on the action. In April it acquired Fastbit, and integrated it with Caviar, the food delivery company it bought in August of last year.

Those companies are going head on against a slew of startups which have been popping up this space over the last few years. There are 25 in the United States alone, according to CB Insight, and these companies are raising huge amounts of money.

Sprig, an on-demand meal service, raised $45 million in Series B funding. Postmates, which started as a delivery service for restaurants that did not have their own services, raised $80 million last month. And Blue Apron, a grocery delivery service company that delivers a recipe and the required ingredients right to their customer's doorstep, raised $135 million in June.

Plus, there is even more activity on the international side.

Rocket Internet, which spent $700 million in one day in February on investments and purchases in the food delivery space, including in Delvery Hero.

Last month, Delivery Hero raised another $110 million, from undisclosed investors in the U.S. valuing it at $3.1 billion.

With this many companies going after the same market, we have to start to see some consolidation eventually. I mean, there are only so many mouths that can be filled, and so many meals that can be eaten.

VatorNews has reached out to OrderUp for more details regarding the acquisition. We will update this story if we learn more.