The food delivery space is a hot one right now, with numerous investments and acquisitions 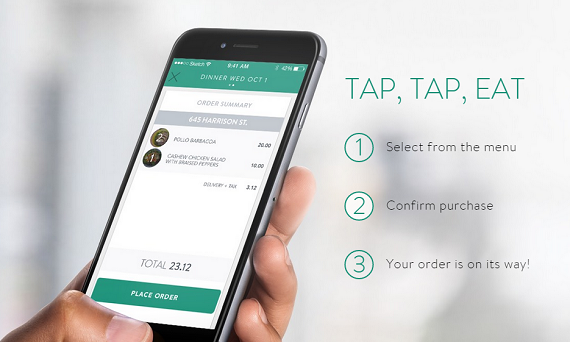 There has been a flurry of activity in the food delivery space lately, with acquisitions, fund raising and companies launching their own services.

The latest to get funded is Sprig, on-demand meal service, which announced on Wednesday that it has raised $45 million in Series B funding.

To date, the company has now raised $57 million, including a $10 million Series A from Greylock Partners, and a $2 million seed round from Battery Ventures and others.

Founded in November of 2014, Sprig enables customers to order healthy, organic and ready-to-eat meals from their smartphone.

Obviously there are a lot of companies already doing this, but there are two things that separate it from the pack, Chantelle Darby, Head of Communications at Sprig, told me.

"Sprig's mission is to make it simple to eat well and because of that, we really focus on two aspects: quality and convenience. Sprig's Executive Chef, Nate Keller, former Google Head Chef, leads our culinary team and focuses on sourcing organic, local ingredients (in fact, in the past 17 months, we've sourced over 400K lbs of organic ingredients from local purveyors)," she said.

The company also has former product leads from transportation companies like Uber and Lyft.

"The magic of Sprig is in just two taps on a smartphone, you can get a delicious, healthy meal delivered to your door in 15 minutes -- but under the hood there's an incredible amount of technology and operational efficiency that happens to create that "magical" experience. We don't think anyone else in this space can match us on either quality or convenience. "

The funding will go toward two areas: expansion and hiring.

Currently available in San Francisco, Sprig will start expanding to the rest of the San Francisco Bay Area and Chicago, and plans to continue expansion to several more cities later this year. The company would not say specifically how many cities it plans to be in at that time.

The funding will also toward expanding its operations and engineering teams. Sprig currently has 100 employees, but dos not have specific numbers on how many it will be adding.

In addition to the funding, the company also announced that Ted Maidenberg of Social Capital will be joining the Board of Directors at Sprig, which already includes Simon Rothman of Greylock Partners and Sprig co-founder and CEO, Gagan Biyani.

"Our team was really impressed not only by Ted's track record and experience, but how he works so closely with his companies and founders," said Darby. "He's really invested in Sprig's mission and will be an incredible partner and advisor as we start to expand outside of San Francisco."

As I said earlier, there has been a flurry of activity in the food delivery space this year, especially from Rocket Internet.

The company spent over $700 million investing in the space, though it does not currently operate in Spain. Delivery Hero does delivery in the country; it currently provides ordering capability for more than 75,000 restaurants in 23 countries across five continents, including Sweden, Korea, China and India.

It followed that up with further investments in foodpanda and Delivery Hero in March, earning majority stakes in both.

At the same time, two companies that most people wouldn't normally associate with food have also started to dip their toes.

In February, Uber launched UberEATS in Barcelona, teaming up with Plateselector, a Barcelona-based food guide, and said was working with "the best local restaurants in Barcelona to create a changing selection of lunch and dinner meals that you can receive in under ten minutes."

It allows user to order from a prix fixe menu, which includes items from local restaurants such as Tender Greens, 41 Ocean, and Bay Cities Italian Deli & Bakery. Like Caviar Fastbite, the emphasis is on being quick and cheap" Each meal costs $12, and is delivered in around 10 minutes. Also, there is no delivery fee.

Earlier this month Square acquired Fastbit, and integrated it with Caviar, the food delivery company it bought in August of last year.

Caviar Fastbite, as it is now called, is currently only available in downtown San Francisco, but Square wants to expand the feature to more neighborhoods "soon."