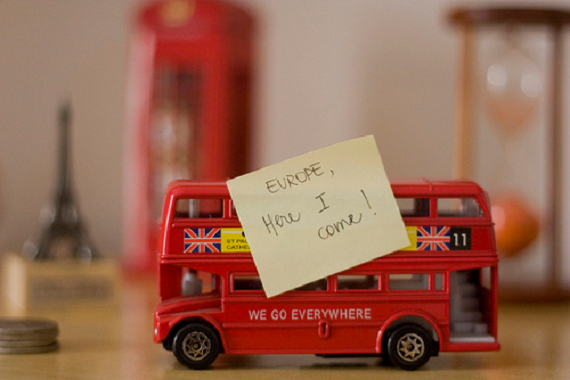 The venture capital firm, which has been around since 2009, has spent the last five years focusing on the best and brightest here in America. But there's a lot of innovation happening in different tech hubs all around the globe, so the firm has revealed its plan to finally expand.

Google Ventures will be landing in Europe, where it has set aside a cool $100 million to "to invest in the best ideas from the best European entrepreneurs."

The firm pointed to Europe's vast history of technological innovation, including the invention of penicillin, the Puffing Billy and the difference engine as examples of  the centuries of great ideas to come out of the continent.

"These marvels from the past still influence our lives today, and are tangible examples of how fearless exploration and entrepreneurship can literally change the world," Bill Maris, Managing Partner at Google Ventures, wrote. "We believe Europe’s startup scene has enormous potential. We’ve seen compelling new companies emerge from places like London, Paris, Berlin, the Nordic region and beyond—SoundCloud, Spotify, Supercell and many others."

The firm will be operating out of a new office that it will be setting up in London, and it will have five partners: Eze Vidra, Tom Hulme, Peter Read, Avid Larizadeh and MG Siegler,, according to the Financial Times.

Siegeler, however, has already clarified that his move to London will be temporary, and he is expected to act as the liaison between the new fund and firm's headquarters in Silicon Valley.

The $100 million fund is only a third of size of the funding that Google typically puts into its venture capital investment arm. It is not clear what kind of startups the firm will be looking to invest,  how many investments it plans to make and how much money will be invested in each one.

Vator has reached out to Google Ventures to find out, and we will update the story accordingly.

Google Ventures has funded over 250 companies, including 75 new companies last year alone, including $21.6 million in local social network Nextdoor; $2.5 million in crafting/DIY site for parents Moonfrye; $361.2 million in e-hailing service Uber; $7 million in back office as a service solution BackOps; and $1 million in messaging app MessageMe.

More recently, Google Ventures has put money into companies that include peer-to-peer car rental service RelayRides, which it helped infuse with $25 million; Puppet Labs, a provider of IT automation software, which raised $40 million round; DataPad, a developer of next-generation data discovery for teams, which raised $1.7 million; Tamr, which enables enterprises to connect and leverage their data, which raised over $16 million; Flatiron Health, which organizes real-time oncology data to help cancer patients and doctors, which raised $130 million; and URX, a mobile deeplinking provider, which raised $12 million.