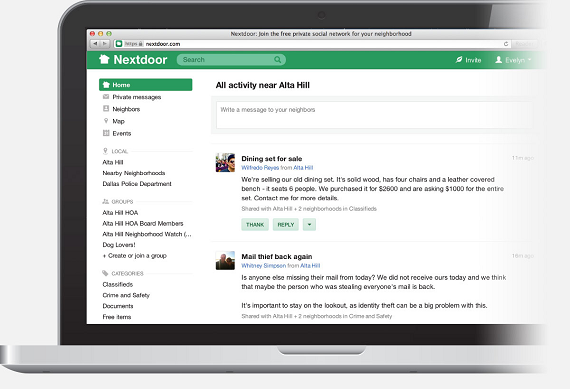 Nextdoor, a social network for neighborhoods, made three big announcements Tuesday: not only has the company debuted the latest version of its service, but it also announced a big new funding round, as well as a new addition to its board of directors.

The company plans to use the new funding to develop new products and expand its market, which has grown to 8,000 neighborhoods across 50 states, with more than 30 neighborhoods signing up each day. Nextdoor's partnership wtih more than 90 city governments and police departments helps drive the neighborhood sign-ups.

Part of the product development will involve going to new platforms. While the service is currently available on the Web, and has a "responsive design" that allows it to adjust to any screen size, the next step for Nextdoor is to develop apps for iOS and Android, Nirav Tolia, co-founder and CEO of Nextdoor, said in an interview with me.

The company wants to expand into foreign markets, but does not have any specific plans yet, said Tolia. Nextdoor gets six to seven e-mails a day from foreign governments in Europe, Asia and Canada, requesting the service.

That Nextweb's demand is so broad, and has such a universal value, is "humbling," Tolia says.

Using Nextdoor’s free online platform, neighbors are able to create private neighborhood sites, where they can get to know each other and ask each other questions, exchange local advice and recommendations, and organize virtual neighborhood watches to reduce crime.

Now Nextdoor is introducing version 2.0, which includes a newly-designed user interface, the ability for neighbors to reach nearby neighborhoods with relevant information and an enhanced focus on helping neighbors create virtual neighborhood watches to fight crime.

Nextdoor now has a dedicated section for Crime and Safety, with Urgent Alerts so that time-sensitive notifications will be sent out immediately. The service has also added the ability for police and fire departments to share updates with members.

The new Nearby Neighborhoods feature lets members share information with surrounding neighborhoods as well, while still maintaining privacy. This feature can be useful in cases such as break-ins, finding a lost pet or promoting a local garage sale.

These were features specifically asked for by users, Tolia said. By looking at how people used the service, and the specific feedback given to them,

"Crime and safety was one of, if not the most important aspects of the service," he said, as was the ability to communicate with outside networks.

The philosophy behind the company is to "bring back a sense of community to the neighborhood," which Tolia says has been lost, but can be brought back through technology. Nextdoor wants people to work together to make neighborhoods a "happier place to call home."

Along with leading the funding round, Greylock Partners is getting a seat at the Board of Directors with the addition of David Sze, who was the partner that led Greylock's early rounds in both LinkedIn and Facebook.

As an early investor in both LinkedIn and Facebook, Sze brings "unmatched expertise and unmatched intuition" in how to help a social network grow, Tolia said.

When it comes to monetization, metrics, even which executives to hire, Sze has spent years thinking about these things.

"There is literally no better investor to have," Tolia said. "He has had a front row seat to two of the biggest social networks."