How do you engage a student?  It’s the core challenge of teaching—going beyond classroom management, assigning homework, and testing.  You can do all of those things in a week, but how do you get a student to want to learn?

The basic reality of education is that if a student doesn’t want to learn, then she won’t.  Educators have come up with different ways to get their students excited about learning.  There’s the age-old strategy of turning everything into a competition—which team can get the most correct answers on a math quiz?  Which student can spell the most advanced vocabulary word?  Classroom competitions don’t work.  They just get kids excited about the competition rather than the information.

That doesn’t mean that turning the information into a game doesn’t work.  Lots of entrepreneurs have delved into the world of edutainment by creating mobile apps and websites that kids can play at home.  If you’re a parent, you’ve more than likely seen them.  They’re often designed for preschoolers or early elementary kids—those who are still in the early stages of learning math and reading skills—so the games are usually mind-numbingly simplistic.  And they’re often marketed to parents, not teachers.

Creating educational games for older students is obviously more difficult because educational concepts become more complex as students get older.  Researchers in Madrid determined that educational games can generate real results providing they’re adaptable to each individual student’s needs, can be easily tracked by the teacher to stay on top of students’ progress, and are simple enough to be integrated without the teacher having to learn a lot of new technical skills.

E-Line Media has created a game that is getting real results—by allowing kids to create their own games.  Gamestar Mechanic is a learning program developed by E-Line Media and the Institute of Play, with help from a grant from the MacArthur Foundation, that uses game design to help students develop systems-thinking skills.

The key fact to note about Gamestar is that it isn’t a learning platform for computer programming. 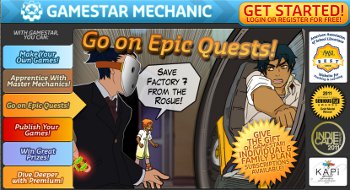 Instead, students are brought into the design side of things and craft their games using drag-and-drop tools.  In doing so, the program engages and develops a variety of different skills, including creative problem solving, writing and storytelling, STEM concepts, and—most importantly—systems-thinking skills.

In a nutshell, the program includes three “levels.”  Kids start off with “the Quest,” an actual game that follows the story of a new arrival in Factory 7.  As “mechanics,” players will go through the game, fixing broken games and designing games of their own to earn sprites—blocks, tools, avatars, and other resources for building games of their own.  From there, players move onto the Workshop, where they use the sprites they’ve earned to build games.  When they’ve finished building a game, they can share it with others in the Game Alley, a community of Gamestar users who play one another’s games and leave constructive feedback.

The beauty of Gamestar Mechanic is that it doesn’t dumb anything down.  Kids who play the game have to engage real thinking skills to earn points, like solving the physics problem of how to get two characters to move through space to meet at the same place at the same time.

More importantly, it prompts players to think in terms of systems.  No element of a game is isolated.  Players have to think about the relationships between objects, avatars, actions, and so on.  This is a crucial stepping stone to developing critical thinking skills and an understanding of larger systems.  Why is systems-thinking important?

“All of human life is mediated by systems,” wrote Robert Torres in his dissertation on Gamestar Mechanic.  “Each day, most of us respond to climate changes, negotiate social interactions and use a host of devices to communicate, entertain ourselves, or seek out information.  We, in essence, spend our days passing through and thus making meaning within and between natural, social, or technological systems.”

Developing systems-thinking skills is critical to understanding the fact that events don’t happen in a vacuum.  Economics, gender theory, race relations, biology, and ecology, among others, are studies of systems—institutions, ideologies, agents, subjects, and so on.  Race riots, gender wars, stock market collapses, and disease epidemics are complex systems of cause and effect, and too many students are simply being taught to turn off their critical thinking caps and look at black and white text that simplifies systems into one cause and one effect.

“For kids to have really effective learning, we think more than just play is required. You need the opportunity to act as a creator, not just a player,” said Brian Alspach, Executive Vice President of E-Line Media and the head of the Gamestar division.  “You need to be able to explore your own creative vision. You need to be able to connect with your peers and mentors in a community of practice. You really benefit from the whole ecosystem supporting you.”

The program is currently in use by more than 3,000 schools, camps, after-school programs, and community organizations.  So far, kids have created more than 250,000 games, which have been played over five million times in more than 100 countries.  Teachers can sign up for free, and Alspach says that while it’s utilized mostly in technology classes, teachers have also used it to teach other subject areas, including ESL, language arts, math, art, and science.  Teachers can customize the program to focus on certain areas.  For example, a language arts teacher may have kids design a game with specific narrative elements, while a science teacher might have students design a game that models natural systems.

“My students were pleasantly surprised that not only were we going to be using video games in the classroom, but that they would be designing, building and then publishing video games for others to play. It was highly motivating for them, and they were very engaged throughout the whole unit,” said Kevin Hodgson, who teaches the sixth grade at William E. Norris Elementary School in Southampton, Massachusetts.  “All in all, the Gamestar Mechanic site is a fantastic way to introduce video game design into the school setting with meaningful purpose, and it provides many layers for engagement by students.”

“We usually run game tournaments where children play each other's games, grade them according to the key elements of game design (which they have learned through the Gamestar process) and celebrate the success of the top three highest scoring games,” said Julia Bateson, managing director of Excited-ed Community Interest Company in the UK.  “We also find that there is always a good gender mix with girls loving it as much as boys. This is certainly not the case with many of the other game design programs.”

But of course, like any other innovation in the edtech space, results speak louder than words.  Does Gamestar produce any noticeable difference in students’ academic performance?

Two dissertations have already been written on Gamestar Mechanic, and the findings show measurable improvements in students’ systems-thinking skills.  Using a rubric based on the Systems-Based Inquiry method, Ph.D. candidate Robert Torres found that 83% of the students in his study made some gain in their systems-thinking skills after playing Gamestar Mechanic.  The rubric scored students on a point scale of 0-4, and 66% showed an improvement of .5 points in their systems reasoning ability, while 33% showed improvement of one full point.