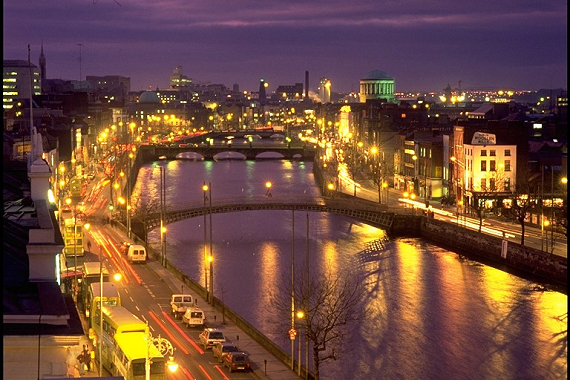 I've been fascinated with the incredibly fast rise of workplace collaboration company Slack, which came seemingly out of nowhere to raise so much money that it is now worth $2.8 billion. Not bad for a company whose product only went live in February of last year.

So what does a company do when it raises this much money this quickly? It expands.

Slack is getting ready to go international for the first time, specifically in Europe, with plans to open an office in Dublin, it was revealed on Thursday. The company plans to hire up to 100 people to work there, with the support of the Department of Jobs, Enterprise and Innovation through IDA Ireland.

Slack has already put up a job listing for an account manager in Dublin, who will be "the primary point of contact for customers and prospects and also handles all escalation management to the appropriate internal groups."

There are a few other positions that have already been listed for the office, including a senior customer experience agent and a technical account manager. No timeframe is given as to when any of these positions need to be filled.

Looking through Slack's job listings might also offer a clue as to one other market the company might be looking at: Asia, as it also has a listing for a customer experience agent in the Asia/Pacific Rim region.

Slack certainly has the money, as it raised a $120 million round in October of last year, and suddenly become a unicorn, having been valued it at $1.12 billion. The company then more than doubled its funding, and valuation, just six months later, raising another $1.6 billion.

Expansion was probably inevitable for Slack, but why Dublin? There are two potential reasons for that, as outlined by the Journal.

The first is a financial incentive in the form of a 12.5% corporate tax rate, among the lowest in Europe. Second has to do with privacy, and its data protection commissioner who is apparently seen as easier to work with than his counterparts in other European countries.

Those two factors have turned Dublin into city that many other tech firms have gravitated toward, including Facebook and Twitter.

"Dublin is a well established tech hub for Europe, so it was a natural choice. We're excited to be there. No immediate plans for other offices right now," a spokesperson for Slack told me.

Slack is a spinoff of Tiny Speck, is a company that was started by Stewart Butterfield, who previously started Flickr. Its first product was a Flash-based multiplayer online game called Glitch. After Glitch was shut down, Tiny Speck launched Slack in August 2013.

The company isn't just growing its valuation at a rapid pace, but its user base as well. It is now used daily by over 750,000 people, and has over 200,000 paid seats. Both daily active users and paid seats have more than doubled since the beginning of this year.