The private tech bubble is real, but does it matter?

Private valuations are jumping wildly, but who gets hurt if the bubble pops? 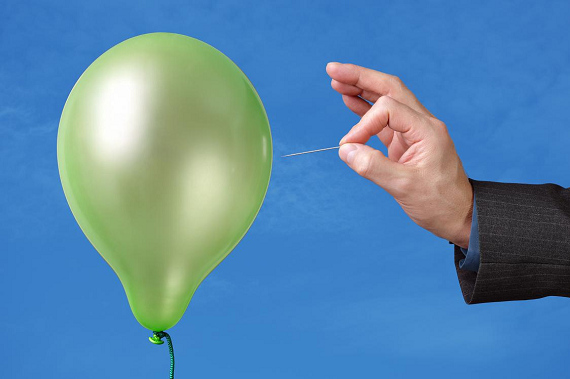 For anyone who has been following the venture capital space over the last couple of years, they should have seen that something has been kind of off for a while.

Suddenly, companies started to get funding amounts that would have been earth-shattering a few years ago, but became somewhat commonplace. And now companies that are now being valued at rates that are beyond anything that we've seen for a long time, if ever.

Take Uber for example. The company first raised a $1.2 billion round in June of last year, a record breaking amount of money, at a $17billion  valuation, which is among the highest ever of a venture backed startup.

That initial amount alone might be evidence of something brewing in the private market, but it was then followed by a $1.2 billion Series E round it closed in December, which was followed another $1.6 billion in a convertible debt round from Goldman Sachs in January of this year. In February, Uber added another $1 billion to all of that!

Uber is now valued at an astonishing $40 billion, making it the second most valuable venture capital-backed company in the world, behind only Chinese phone manufactuerer Xiomi, which is worth $45 billion.

Then there is Slack. Six months ago nobody was talking about this company. Then it raised a giant funding round and became what people began calling a "unicorn," a.k.a. a company valued at at least $1 billion. And, all of the sudden, Slack was everywhere. Now, just five months later, it is reported to be doubling that valuation with another $160 million.

The craziest part about this is that Slack literally only debuted a year ago!

So you want to be a unicorn?

These kinds of events have finally gotten people in the industry to start calling this what it is: a tech bubble in the private sector. The evidence is overwhelming.

First, there is profileration of unicorns. Companies with $1 billion valuations have simply exploded in the last year. In 2014 alone, 38 different companies entered the $1 billion club, according to a report from CB Insights. That is more than the three previous years, when only 22 companies made it combined.

A chart, put together by ValueWalk earlier this month, shows just over overpriced some of these companies are.

Another CB Insights report, put out last week, showed the growing gap between public and private tech fundraising, and just how much money is flowing into private companies right now as opposed to companies that are choosing the public route.

So far, there have been only two venture capital backed tech companies that have IPO'd in 2015: Box and Maxpoint Interactive. Together they raised only $250 million in those offering. The amount that has been put into private companies this year alone has already reached $9 billion.

In 2014, there were 34 IPOs, which raised over $5 billion, while private VC-backed tech companies took $39.03 billion in total funding.

When it came to the number of funds, 2014 was the busiest year for U.S. venture capital fundraising since 2001, when 324 funds were raised.

There is more money flowing through venture capital now than there has been in years, and those firms want to spend it.

So is this a big deal?

Ok, so private valuations are going crazy right now. What does that mean, though? And is it a big deal? Well, that depends on who you ask, of course.

Dallas Mavericks owner, and Shark Tank star, Mark Cuban certainly thinks its a big deal. Earlier this month he wrote a blog post entitled, "Why This Tech Bubble is Worse Than the Tech Bubble of 2000." So he obviously sees this as a potentially very big problem.

"If we thought it was stupid to invest in public internet websites that had no chance of succeeding back then, it’s worse today," he wrote."To the investor, its the hope of a huge payout.  But there is one critical difference.  Back then the companies the general public was investing in were public companies. They may have been horrible companies, but being public meant that investors had liquidity to sell their stocks."

I spoke to Cuban about what will happen if, and when, this bubble pops.

"I think a lot of people will lose money they can't afford to lose. I don't think it will impact the overall economy or the stock market," he told me. What makes it so bad, though is, "the number of people who will lose all their money."

"Most of the people who make direct private investments in tech people will lose 100 percent of their money.  That's what makes it far worse," he said. "In the tech bubble, you may have lost paper profits. You may have lost cash. But you could get out before losing it all."

Not everyone agrees with that. In fact Phil Pearlman, Senior Yahoo Finance Editor, wrote a blog post tearing into Cuban for what he written. His basic point: yes, angels might lose their money, but the number of people who will be hurt if this bubble bursts will be far fewer than in 2000.

"While it might be true that private company liquidity is low relative to the ease with which we can trade in and out of public stocks on the internet, magnitude is really much more important than liquidity here," Pearlman wrote.

"Angel investing is microscopic relative to the 2000 tech bubble and so the amount of money lost will be inconsequential comparatively this time around."

These are two completely opposite viewpoints: one that it is the amount of money lost that matters, and the other the number of people impacted.

Anand Sanwal, CEO and co-founder of CB Insights, is of the opinion that it will actually be the little guy who gets the shaft if this bubble pops.

"These lofty valuations don't get discussed as much as they should. The investors who do these big rounds, get a lot of preferences and protections. They dont need Uber to be $40 billion to make a return. They can do that at a much lower rate," he said. "The ones who are really the most challenged are people who don't have to those preferences, like common stock holders and employees. Some made smart bets, but just as many, or more, who invested at market peak will never see a return. But that is the nature of investing."

And even if the bubble does burst, and a lot of money is lost, venture capital firms aren't going to make a big deal out of it. Why would they?

"In the private market you can bury your dead quietly. If you lose money no one has to know, because there's not as much disclosure as when its public," he said. "Private market investors will get burned, and then go away quietly without fanfare."

And still others simply don't see this bubble having much of an impact at all.

"I rather think we have Unicorn Fever.  Right now the fear is excess valuations in the later-stage fast growing uncorns that VCs anticipate will become an Unicorn exits," Duncan Davidson, co-founder and managing director at Bullpen Capital, told me. "They have a point as the IPO market is pretty dry right now, hence private values are rapidly outpacing public.  Either the IPOs come back later in the year and in 2016, or Unicorn Fever breaks."

And if it does break happen, the impact on venture capital may be slight.

"It may break in a non visible way, i.e. later rounds at worse valuations or structures. If the IPO window fails to open by sometime in 2016, this whole edifice of deals may be stillborn."