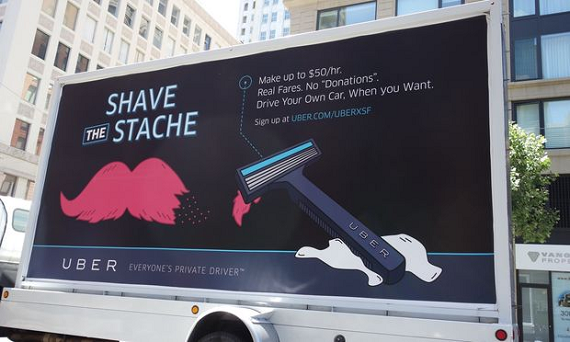 It's no secret that Uber has been feeling the pressure and competition from ride-sharing apps recently, most notably Lyft. So the company has been taking numerous steps, including cutting prices, to stay competitive. It has even revealed that it it is planning to start its own ridesharing service in markets where it already been given approval by regulators.

But now Uber is taking the fight straight to Lyft, challenging the company head on its most recently launched markets.

Here's how it went down: this past Thursday, to promote itself over the upcoming Labor Day weekend, Lyft announced that it was launching its services in Indianapolis, St. Paul and Atlanta, bringing its total markets to 10.

In response, Uber announced on the local blogs for three cities, Indianapolis, St. Paul and Phoenix, that it was giving away free rides on its hybrid uberX line as a promotion. (Why not also do it in Atlanta? Because uberX has already been operating in Atlanta since June.)

Once again, like it always likes to do, the company used local celebrities for the roll out. This time it was Indiana Pacers' shooting guard Paul George in Indianapolis, Vikings football players Harrison Smith and Toby Gerhart in St. Paul, and Jimmy Eat World's Jim Adkins in Phoenix.

This is Uber's most blatant attempt to take on the competition yet.

To keep ahead of the pack, Uber has been cutting prices. In January it lowered the prices on its standard Uber Black car service by 10%, and last month it announced that it would be lowing prices on its uberX fleet as well, in order to make them 10% cheaper than a taxi.

In April Uber revealed that it it was planning to start its own ridesharing service in markets where it already been given approval by regulators.

The company also addressed the issues of being able to compete with those services that use non-regulated drivers.

"Over the last year, new startups have sought to compete with Uber by offering transportation services without traditional commercial insurance or licensing. Uber refrained from participating in this technology sector — known as ridesharing — due to regulatory risk that ridesharing drivers may be subject to fines or criminal misdemeanors for participating in non-licensed transportation for compensation," the company said.

"In most cities across the country, regulators have chosen not to enforce against non-licensed transportation providers using ridesharing apps. This course of non-action resulted in massive regulatory ambiguity leading to one-sided competition which Uber has not engaged in to its own disadvantage."

Some might say, though, that giving away free rides is a bit unfair, considering that Uber, which just raised over $360 million has so much cash to burn. But I think its good to see some good old fashioned competition. Free rides won't mean anything is Uber doesn't deliver a good service.

It will be very interesting to see how, and if, Lyft reacts to this move.

Uber and Lyft could not be reached for comment.