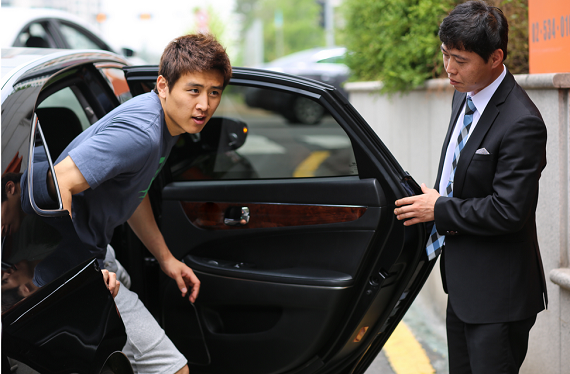 Since launching in Singapore in January, Uber's plan roll out its service across Asia has not been a secret. Now the company has made its official second stop in the region.

Uber has begun to test out its service in the Gangnam district (yes, that Gangnam!) of Seoul, South Korea, it was announced in a blog post Monday.

"Earlier today, secret Ubers appeared on the streets of Gangnam, and some of them quickly made their way north across the river," Uber wrote. "As a technology company that aims to connect stylish riders to professional chauffeurs everywhere in the world, we are excited to announce Seoul, known for its trendy fashion and socialites who love to party, as our second Asian city."

Uber is, of course, an on-demand transportation app, one which allows users to connect with a luxury car service directly from their smartphones. The company decided to reveal the Seoul tests in style: by having its first celebrity in the region try out the service. That was soccer star, and 2012 Olympic Bronze Medalist, Koo Ja-Cheol.

The tests in Seoul are expected to last a few more weeks, during which Uber says that will be spending the time "figuring out the best and most stylish ways to get Seoul-ites around town," as well as adding new cars to the fleet.

Uber will also be charging a flat rate of ₩150,000 between Incheon Airport and Seoul.

Right now, it seems that the only option available to riders in Seoul is UberBLACK, which is Uber's default option of a high-end sedan or SUV that seats up to four people. There is currently no indication as to whether or not users will be given access to some of Uber's other services, such as UberX, a lower cost fleet made of mostly hybrids, as well as some smaller sedans, or UberTAXI, which allows users to choose a local taxi.

Uber is also trying to get the word out in its new city by offering users in the area ₩20,000 off their first ride if they put in the promo code "SeoulFirst."