After the ill-fated Qwikster announcement and dismantling earlier this year, Netflix looked like it might see more people jumping ship than staying onboard but a survey out Thursday is showing that more people are using the video service but fewer are happy than in the results released in May.

Citi surveyed almost 10,000 former and current Netflix customers over the last few months to find out just how the service was doing, in the eyes of it's users. 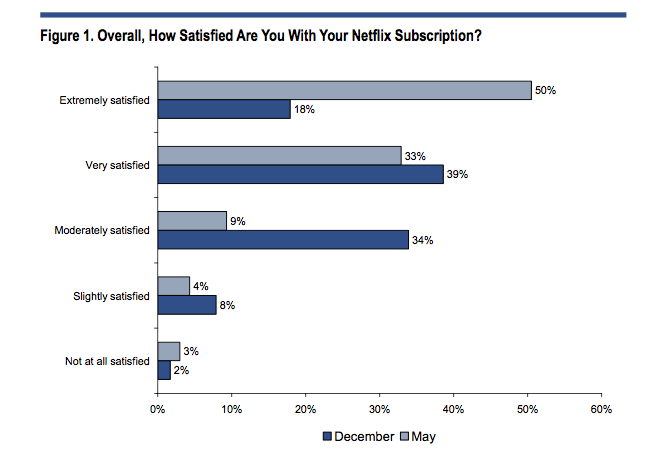 The Citigroup survey looked at Netflix users since it hiked its rates and tried to spin off a separate DVD rental service and found that the percentage of people that were "extremely satisfied" with their Netflix subscription dropped drastically from 50% in May to 18% this month.

Citi analyst Mark Mahaney expressed that the results are skewed since it was shown that most of those truly upset by the price hikes, attempts at a spinoff company and the loss of some programming have likely already left the service.

The survey asked participants where they watch their media and the results also showed that there aren't that many comparable options that are threatening Netflix. 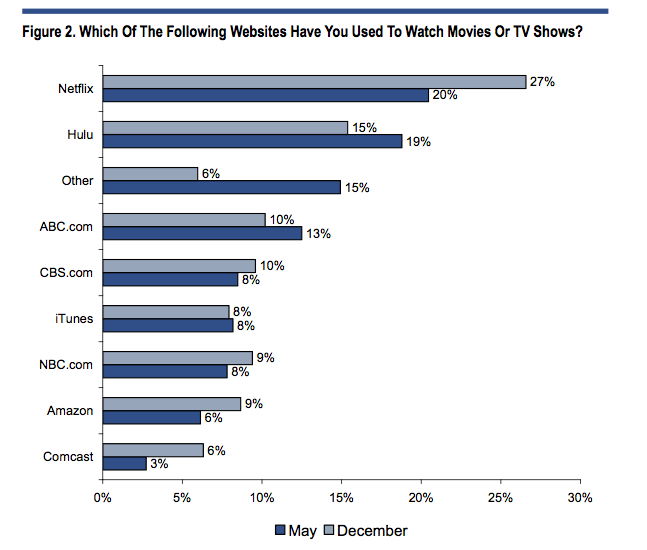 Most of the sites mentioned, with the exception of Netflix and Amazon saw percentage losses since the May survey. Amazon saw a moderate spike from 6% of respondents watching content on their service to 9% -- Netflix experienced a modest bump from 20% to 27%.

Surprisingly, Hulu dropped from 19% to 15% and ABC's website also experienced a noticeable drop from 13% to 10%.

Mahaney expects Netflix to continue its growth but continue to see less interest in the DVD aspect of its service: he estimates a loss of  800,000 DVD subscribers this coming year, to 9.9 million and a noticeable growth of 9.9 million, to 30.9 million, for the streaming service.

Netflix recently announced the expansion of it video services globally with the addition of Latin America and the U.K., so continued growth seems inevitable, but less rapid than prior to all of the summer commotion.

Netflix recently announced that its subscriber count dropped to 23.8 million from 24.6 million, which caused its stock to plummet nearly 40% to $74 in October.

The Netflix stock (NASDAQ: NFLX) saw a 52-week high just above $304 but was trading Thursday morning just below $74.

From the results of this survey, Mahaney thinks Netflix will become profitable again by the end of 2012 and has lowered his price target the stock -- with hope that the once booming stock will soon get on the positive side of $80.

At this point, investors might be interested in a more comprehensive study of more current and previous users in order to track their interest in where the household name in video-streaming could be headed in coming months.