Would Jed Katz be interested in investing in this cool instant messaging startup?

We wrote about HipChat back in August, when the startup took in $100,000 from Sandy Jen and Elaine Wherry, both co-founders of instant messaging company, Meebo, and TechFellow Awards recipients, as well as the Founders Fund.

Pete Curley, co-founder of HipChat, has a great video pitch on his company profile on Vator, so we put him into a Vator Box episode (which we haven't aired in a while). For those not so familiar, Vator Box is a show where we bring in an investor, typically a well-known venture capitalist, or a seasoned entrepreneur and we take a look at startup pitches and evaluate them.

In this episode, Jed Katz, a venture capitalist at Javelin Venture Partners, was our guest host. He joined me and my co-host, Ezra Roizen, digital media investment banker.

We look at HipChat, a young startup providing instant messaging and group chat for small companies, typically with fewer than 50 employees.

- Jed gave the product a thumbs up. In his words, "It's a cool product."

- We highly encouraged HipChat to give the product away for free because its target market of SMBs (small- to medium-sized businesses) of fewer than 50 people is a relatively frugal customer base. HipChat is doing just that with a 30-day trial. But at the time we filmed this, HipChat's business model was to charge $1 per user, per month. It was unclear whether there was any free version at the time. After 30 days, HipChat's subscription service kicks in.

- If HipChat is looking for an exit down the road, they may best be served trying to build up a significant user base as oppose to building up revenue.

- By having a significant number of users (over some revenue), the company may have more defensibility. A larger company may choose to acquire them rather than copy them if they have a big enough user base.

- Javeline Venture Partners is an early-stage VC firm based in San Francisco. Would Jed want to meet with Pete? You'll have to watch to find out!

HipChat is a private instant messaging and group chat service for companies that saves you from the distractions of today’s workplace: pointless meetings, long email threads, and the dreaded “tap on the shoulder.” Using HipChat, you can share text, code and files in a private setting for instant collaboration and decision making. Founded in 2009, HipChat was started by the guys who created HipCal which was acquired by Plaxo. For more information about HipChat or to give HipChat a try, check out www.hipchat.com. 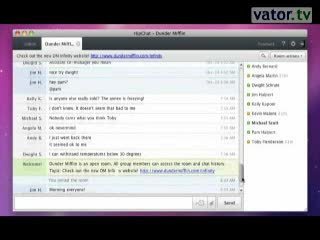