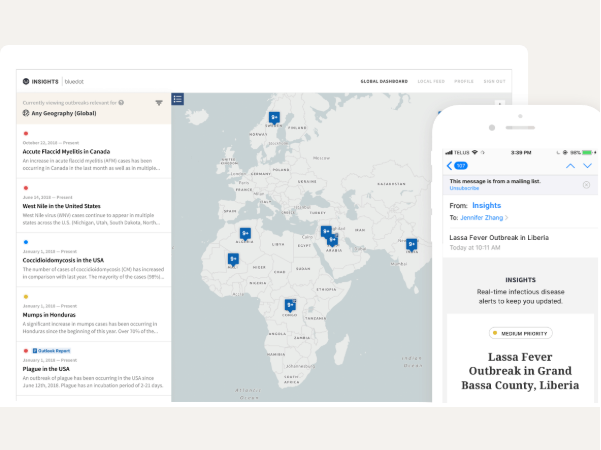 Artificial intelligence has already had a tremendous impact on healthcare as a business, with chatbots alone expected to save the industry billions of dollars in just the next few years. The impact on patients might be even greater, as the technology is already helping to catch diseases faster, allowing physicians to get ahead of potentially harmful pathogens before they spread to other people.

That's the driving idea behind BlueDot, a digital health company that uses artificial intelligence and big data analytics to track and anticipate the spread of dangerous infectious diseases.

"Trends such as globalization, climate change, population growth, and air travel are making infectious disease threats costlier, deadlier, and more frequent. Annually, the flu costs the U.S. $10 billion and kills over 600,000 people globally. 2003’s SARS pandemic cost the world economy over $50 billion with 8,000 infections. The World Bank and others estimate that we are due for another global pandemic which could kill up to 100 million people and cost the global economy $4 trillion," Lindsay Bryson, Chief Operating Officer at BlueDot, told Vator.

"However, new trends including big data analytics, machine learning, and the widespread adoption of digital technology present a new opportunity to address this growing threat. BlueDot exists to confront this modern problem with modern technology in a space where governments have been too slow in adopting cutting edge technology, healthcare systems don't have the capabilities to protect themselves, and no one is looking out for the economic risks faced by the broader private sector. We’ve combined our medical and public health expertise with advanced data analytics to build solutions that track, contextualize, and anticipate the spread infectious disease risks."

On Wednesday, the Toronto-based company announced that it raised a $7 million (USD) Series A round, co-led by Canadian insurance company The Co-operators and BDC Capital's Women in Technology Venture Fund, along with existing investor Horizons Ventures. With this latest round, the company has now raised a total of $9.5 million.

Along with the funding it was also revealed that The Co-operators and BDC Capital will be joining the board of directors at BlueDot.

BlueDot was founded directly as a result of the SARS pandemic back in the early 2000s, Bryson told me, "wherein a virus from halfway around the world quickly crippled the city of Toronto, its healthcare system, and terrorized its population."

"Within a clinical setting, our technology has the potential to reduce the chances of a ward closure due to travel-related infectious disease, protects patients and staff from being exposed, and saves time in monitoring global threats. While we know that we can save a typical hospital hundreds of labor hours per year, the value of risk prevention is much greater & harder to quantify."

The company's clients and partners are mainly those in public health and healthcare, including hospitals and hospital networks, though it does serve a number of other industries as well, including insurance and airlines. It was revealed that, in addition to being an investor, The Co-operators will also be partnering with BlueDot going forward, with The Co-operators using BlueDot's data and analytics capabilities to help its clients make better decisions around the prevention of infectious diseases.

"Much like The Co-operators, BlueDot is a purpose-built organization focused on making positive social and environmental impacts, and we are very excited to explore how the company's data analytics and predictive technology can help us strengthen the resiliency of Canadians," Rob Wesseling, President and CEO of The Co-operators, said in a statement.

"These client verticals are most interested in our BlueDot Insights product as a tool that can automate external infectious disease surveillance processes and contextualize risk based on the geographies relevant to them. This helps them to better prepare for and respond to global risks," Bryson explained.

BlueDot plans to use the new funding to grow its sales and commercialization efforts in government, healthcare, and insurance, and to develop its AI-driven product suite.

"Artificial Intelligence is a critical core technology and competency we’ve built at BlueDot. AI allows and will continue to allow us to do things that would otherwise be impossible; this includes scanning over 10,000 articles from official and moderated sources on global infectious disease activity per day in over 60 languages, and performing tailored, quantifiable risk assessments for organizations and individuals in real-time, an exercise that traditionally takes weeks" said Bryson.

"Ultimately, AI will allow us to replicate and democratize human judgement when it comes to the diagnosis of infectious disease based on global, real-time events, which are changing on a daily basis. By investing in developing and training a proprietary AI engine to power our products, and pairing those algorithms with core epidemiological approaches, BlueDot continues to push the boundaries in terms of what’s possible in protecting the world from dangerous infectious diseases."

The funding will also go toward expanding to new global markets, specifically those, "where we think we can make the most impact and have the most reach."

"Following this next funding round, BlueDot will focus on continuing to grow in the government and healthcare spaces, where we already have initial traction and our team has deep expertise and experience. We will also expand into new verticals such as insurance and travel, where our clients serve large populations, have significant exposure to infectious disease risk, and where we can work with our partners to protect large numbers of individuals around the world,” said Bryson.

Ultimately, she told me, BlueDot’s mission is to stop the spread of deadly outbreaks, which would mean ”seeing every government, every hospital, and every individual around the world using our products to get ahead of and protect themselves in the face of these dangerous outbreaks, ultimately reducing the global impact." 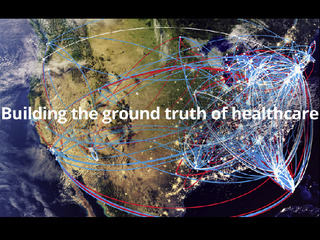