Uber and MoiChef team up for food delivery promotion

MoiChef is a French Blue Apron, where users have ingredients delivered for them to cook 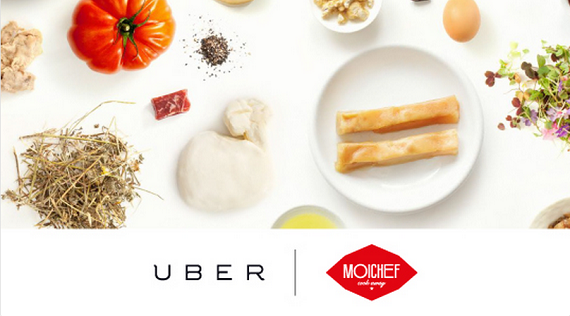 Uber is really getting into this whole food delivery thing, huh?

The company, which has launched food delivery experiments in both the United States and in Europe, is running a two-day promotion with French start-up MoiChef, starting on Friday, it was revealed.

MoiChef is basically the French version of Blue Apron: customers choose a restaurant and a dish they want to make. The company will then deliver the ingredients and recipe to the person's home, allowing the customer to cook the meal themselves.

All users have to do is connect to the Uber app, select the Chef Me button   at the bottom left of the screen,and then order their free meal.

On its own this news doesn't seem that important, right? Uber does this kind of thing all the time, with small partnerships and promotions, and one off experiments like the time it delivered kittens for National Cat Day, and then Christmas trees for the holidays.

The reason that a promotion like this warrants attention is that its another indiciation that Uber sees food delivery as a potentially big part of its company in the near future.

The MoiChef promotion comes only a couple of weeks after the company launched UberEATS in Barcelona. Uber teamed up with Plateselector, a Barcelona-based food guide, and said was working with "the best local restaurants in Barcelona to create a changing selection of lunch and dinner meals that you can receive in under ten minutes."

Some of the restaurants it is partnering with include Surf House Barcelona and Feeld Organic.

Obviously there is a lot of competition in the food delivery space, with Grubhub dominating in the United States, and some pretty heavy competition in Europe as well.

The are two big international players that Uber is going to have to contend with: Rocket Internet and Delivery Hero.

Uber has made it clear that it wants to take its fleet of taxisand use them for more than just transporting people. Not all of its experiements have not worked out so well: Corner Store/UberEssentials, its on-demand delivery service that it launched in Washington D.C. but which was shut down earlier this year. But food delivery seems to be a space where Uber seems to think it can make a real impact.

This promotion was first spotted by Venturebeat.

VatorNews has reached out to Uber for comment on the MoiChef promotion. We will update this story if we learn more.