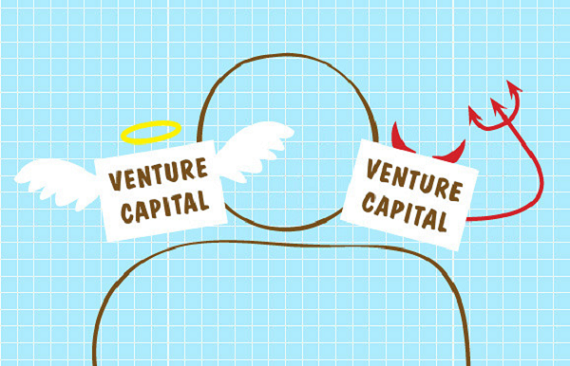 Every week I write the funding roundup column here (shameless plug alert: see them all here!) and I can tell you that it is very easy to get caught up in the hype of a company raising a lot of money. There is so much money being thrown around Silicon Valley, in fact, that it might seem impossible to not lose sight at some point over whether or not a company is actually worth that much.

Even determining that can be a little tricky, though, as there are many ways to  view success or failure.

CB Insights has compiled the list of the largest financings for venture capital backed companies, in order to look at how many of those can be called, in some measure or another, a failure.

Here is the chart: 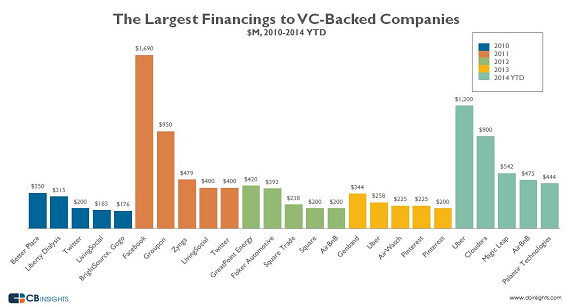 Perhaps the most obvious example of a company that received hefty amounts of funding, but have turned into giant pumpkins are daily deals site, like Groupon and LivingSocial.

LivingSocial, for example, has raised nearly $1 billion, most notably a $400 million round at a $3 billion valuation in 2011. Now, however, the company is described by CB Insights as "walking dead" as it has struggled as the fad of buying discounted goods online quickly wore off.

The company has lost numerous executives over the last couple of years, including three out of four of is co-founders, and this past November it was forced to layoff 10% of its global workforce.

And it has been hit financially as well. A regulatory filing from January showed that, while LivingSocial's revenue more than doubled in 2012, to $536 million from $250 million in 2011, its net loss also went up to $650 million from $499 million the year before.

Not all is lost (the company did hire a new CEO in July) but I would love to know if any of its investors regret pouring so much money into it.

Its rival Groupon has similarly struggled. The company, which had raised $1.1 billion before going publicin 2011, was flailing even before that, beginning with controversy over its business metrics that puffed up the company’s performance to make it look like it was doing better than it actually was.

Once Groupon made its public debut, it was all downhill from there. Shares are now trading at $7.50 a share, down from its $26 listing price.

And, like LivingSocial, the leadership has suffered, with founder and CEO Andrew Mason getting fired last year.

So, yeah, they can't all be winners. Others that CB Insights highlights, however, have maybe had some setbacks but I would not deem them to be failures in any discernable way.

As the report notes, Square, a company that has raised $590.5 million, most recently a $150 million round, has had "its share of issues," and "does still seem to be trying to figure out what it wants to be when it grows up."

Those are fair criticisms. Square Wallet was kind of a bust and the company has not yet found a way to make itself profitable. It has been branching out into new sectors, including food delivery with the launch  of Square Order, followed by the purchase of Caviar in August. Perhaps that gives the impression to some that the company is still trying to find itself.

Square did just pass one billion payments in only five years, though. And who says that experiments are bad? Uber has experimented with food delivery as well; it's cool when companies find new and interesting ways to expand their business model. This is not a company that I would label as a "bust" by any means.

Another company that CB Insights highlights is Box, due to its head scratching decision to filed for an IPO back in March, and then seemingly delay that public offering for, well, who knows how long?

The company has cited market conditions as the reason for pushing back its IPO, as the market began hitting other public cloud software companies, including Workday, Veeva Systems and Xero, right around the time it filed. Box even decided to raise more funding in July, a pretty unusual move for a company in its position.

But those losses are primarily being driven by Box's sales and marketing expenses, which added up to over $171 million last year, up from $99 million in 2012. That is nearly four times as much as it spent on its next highest expense: research and development, which only cost the company $45 million.

As Tien Tzuo, the founder and CEO of Zuora, has pointed out, without those expenses, Box would have a 20% recurring revenue margin. So all it really has to do it cut down on sales and marketing and it will be fine.

Vator will be holding its  inaugural “Post-Seed” Conference in early December, to discuss how venture capital is changing, due to a landscape being altered by new financing options, including crowdfunding and debt financing. Get your tickets here!