Yahoo picks up Zofari, a recommendation tool for places 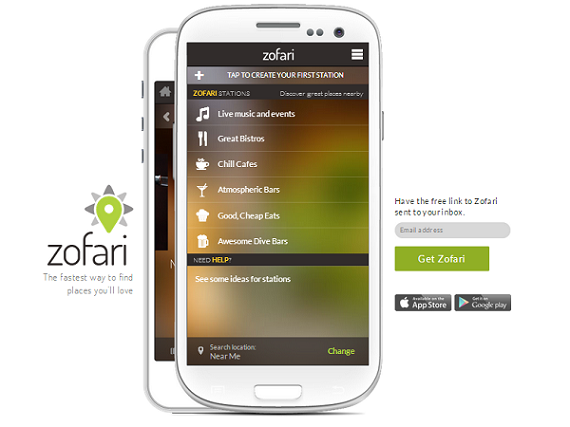 The Internet has perfected the idea of getting the right content in front of you at the right time. It thinks it knows what music you want to listen, what movies you want to watch  and what things you want to buy.

Recommendation platform Zofari took that idea and expanded it to places: based on the places you already liked to go, it could recommend similar places where you were that it thought you might also like. Seems like a pretty useful too.

Yahoo thought so too, so now it has gone ahead and acquired the company, it was revealed in a post onZofari's homepage on Tuesday.

No financial terms of the deal were disclosed, but this is yet another acqui-hire for Yahoo. Zofari will be shutting down and its team will be coming over to Yahoo.

Zofari was a service that would recommend places to users based on other places that they had previously visited. Users would create what it called a "Place Station," in which it would tell Zofari about a restauarant, bar or even neighborhood that they loved. Zofari would then find a similar place near the user's location. Users also could search themselves, by city or by neighborhood, for places to visit.

"We built (what we think) is a beautiful and powerful recommendation app that allows users to discover new places based on the restaurants, bars and cafes they know and love," Zofari said.

Now as part of Yahoo, the team will be able to do what it had been doing, but at a much larger scale.

While we've built an experience we couldn't be more proud of, we're a small company and have always dreamed of reaching users at a greater scale,"  the company wrote. "After meeting some of the amazing folks on the Yahoo Search team and hearing about their vision, the decision for our team to join Yahoo was an easy one."

As to what exactly the Zofari team will be doing at Yahoo, though, that will remain a mystery for now. All the company would say about it that they "can't talk about what we're working on yet but needless to say we are very, very excited."

"Zofari and Yahoo share a common goal to make the world an easier place to explore for as many people as possible. We’re thrilled to welcome the team to Yahoo, where they will join our growing Search organization and continue to build amazing discovery experiences," a Yahoo spokesperson told Vator.

This is Yahoo's tenth purchase so far this year.