People's Uber allows Beijingers to take rides, and pay only enough to cover the driver’s costs 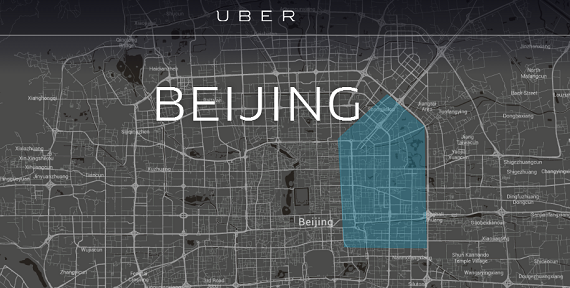 It's been pretty obvious for the last couple of years that Uber sees a big part of its success coming from Asia. Last year it expanded to Singapore, South Korea, Taipai, Dubai, Shanghai and Bangalore. In April of this year came the big one: the company began rolling out its services in Beijing.

Its no secret why Uber would want to be in China and India: they are also not only two of the fastest growing countries in terms of industry, but also some of the most densly populated as well. As both countries begin growing their middle class, Uber will be there to make good. So what's the best way to get people to use them there? By giving the service away for free.

In a blog post put up on Sunday, Uber announced a new non-profit ridesharing program in Beijing called "People's Uber."

"Uber’s mission has always been about moving people, which is why we created People’s Uber, a service created for the people of Beijing, powered by Uber technology," Ben Chiang, head of China expansion at Uber, wrote in a blog post. "People’s Uber brings promising innovations fit for a city with Beijing’s scale."

The new service works the same as Uber does everywhere: riders connect with a driver through the app, and get driven to their destination. Drivers are fellow Beijingers, who are vetted by Uber and who are rated by users after every trip that they take. The only difference now is that "riders only cover the driver’s costs."

What exactly "the driver's costs" means is not entirely clear. That could mean gas, or simply tolls that would have to be paid. It is also not clear how that cost will be determined. VatorNews has reached out to Uber to find out more and will update the story accordingly.

The ultimate idea, according to what Chiang wrote, is to help people carpool, putting less cars on the road, and allowing people to get where they need to go, even during peak times.

"For riders and drivers alike this means more transportation options, especially when they need it most: during rush hours, peak holiday periods, and other times when most people are on the road and many along the same routes," he wrote. "Beijingers can help their neighbors, meet new friends, and discover new places along their regular commute – all on their own schedule, and without adding new vehicles on the road."

Of course, Uber has come under much criticism for often doing the exacty opposite: jacking up rates during peaks times and conditions, a move that the company has always said was necessary to remain competitive.

"Higher prices encourages more supply to come online. It gets some drivers out to work on NYE. It keeps other drivers from going to alternatives like renting their car out for the night, or trying their luck at hustling rides on the street," Travis Kalanick, Uber's co-founder and CEO, has said in the past. "Higher prices means more cars, means more rides, means more people getting around the city efficiently, safely AND in style."

Uber has been slashing prices all over the place in recent months. In June, it cut prices by 25% in Los Angeles, making an Uber ride 40% cheaper than a cab. In July it cut New York City prices by 20%, making it cheaper than an NYC Taxi Cab.

This, of course, has a big downside: a recent article from Forbes, calculated that, after the San Fransisco price cuts, the company was actually losing money from every UberX ride.

That is because drivers have protested the fare cuts (lower fares mean less money in their pockets), so Uber has decided to still pay out the typical 80%, but on the original fare. That means that a rider is now paying $11.25 for a ride that used to cost $15, but the driver is still making $12. That is 75 cents coming out of Uber's pocket for every ride.

With numbers like that, it does not seem that Uber can realistically keep cutting prices and also keep the cuts it has already implemented. At least not if it wants to remain a viable business.

Shout to VentureBeat, who first noticed this launch.