Splash LA May 2013 People's Choice Award winner Teachmeo an international marketplace and community where anyone who wants to learn and/or teach and skill can connect via live, one-on-one video. We're planning to revolutionize the way people learn & teach by becoming the largest interactive educational marketplace in the world. Watch CEO Natalie Novoa present

Teachmeo competed against more than 100 companies at Vator Splash LA this May through two rounds. The first round was a popular voting round. The second round was judges' rounds.

Even though success is not defined by how much money a company has raised, past Vator winners, such as Thumbtack, Getable, Grovo, Astrid, Udemy, and Geeklist have gone on to raise millions of dollars collectively from venerable VCs, soon after presenting.

Here's some other testimonials:

"The process of inviting everyone one we knew to vote for us, even before the event, was a fantastic way to build support for our company. Then presenting at Vator Splash was a blast. The short presentation style ensured the audience was engaged and the follow-up questions from the judges were on-point and constructive. At Vator Splash, I made great connections with a number of investors and had a number of follow-up meetings. We were able to raise our last round entirely from investors who discovered us from the publicity we generated from Vator Splash," said Jon Paris, CEO and founder of Astrid.

"Working with Vator, and Bambi, is a pleasure. She's really passionate about uniting great ideas with the right people. We actually tied for first in last years Vator Splash SF and as a direct result raised $150,000 from an investor who saw us pitch. TEEC Angels approached us right at the event and invested soon thereafter. Reuben Katz, CEO and founder of Geeklist.

"Vator has acted as a launchpad for my startup in terms of awareness and exposure. As a winner of a Vator competition, my startup enjoyed early traction and buzz. Vator has kept my business relevant in the minds of investors, entrepreneurs and potential employees. I've made many invaluable connections to the investor and entrepreneur community." Tim Hyer, founder and CEO, Getable.

"DogVacay.com won Vator Splash LA in June 2012. The competition allowed us an opportunity to meet and pitch against some of the great Los Angeles startups and further foster our entrepreneurial community. There was such a positive energy with so many great minds providing insightful feedback throughout the night. Two paws up, Vator!"  Aaron Hirschhorn, founder & Top Dog, Dog Vacay

"Events like Vator Splash are critical for startups to generate awareness. We were a top 10 finalist for Splash LA. It provided us with an amazing opportunity to network and gain exposure to a whole community of investors and VCs. Soon after, we raised $3M as a result of the momentum/exposure from the event and the platform in general," Peter Vogel, founder and CEO, Plink.

Teachmeo is an international marketplace and community where anyone who wants to learn and/or teach and skill can connect via live, one-on-one video. We're planning to revolutionize the way people learn & teach by becoming the largest interactive educational marketplace in the world.

Teachmeo's range of learning topics is limited only by the imagination. Crochet, origami, music lessons, sign language, sushi making.... these are just a few of the countless hobbies and skills that Teachmeo will cover.

Unlike other e-learning websites that specialize in pre-recorded videos or impersonal webinars, Teachmeo provides a true one-on-one learning environment that replicates the experience of being with a teacher in the same room. This is especially helpful for teachers and students who might be separated by hundreds, or even thousands, of miles but now can meet face-to-face in the comfort of their own homes. 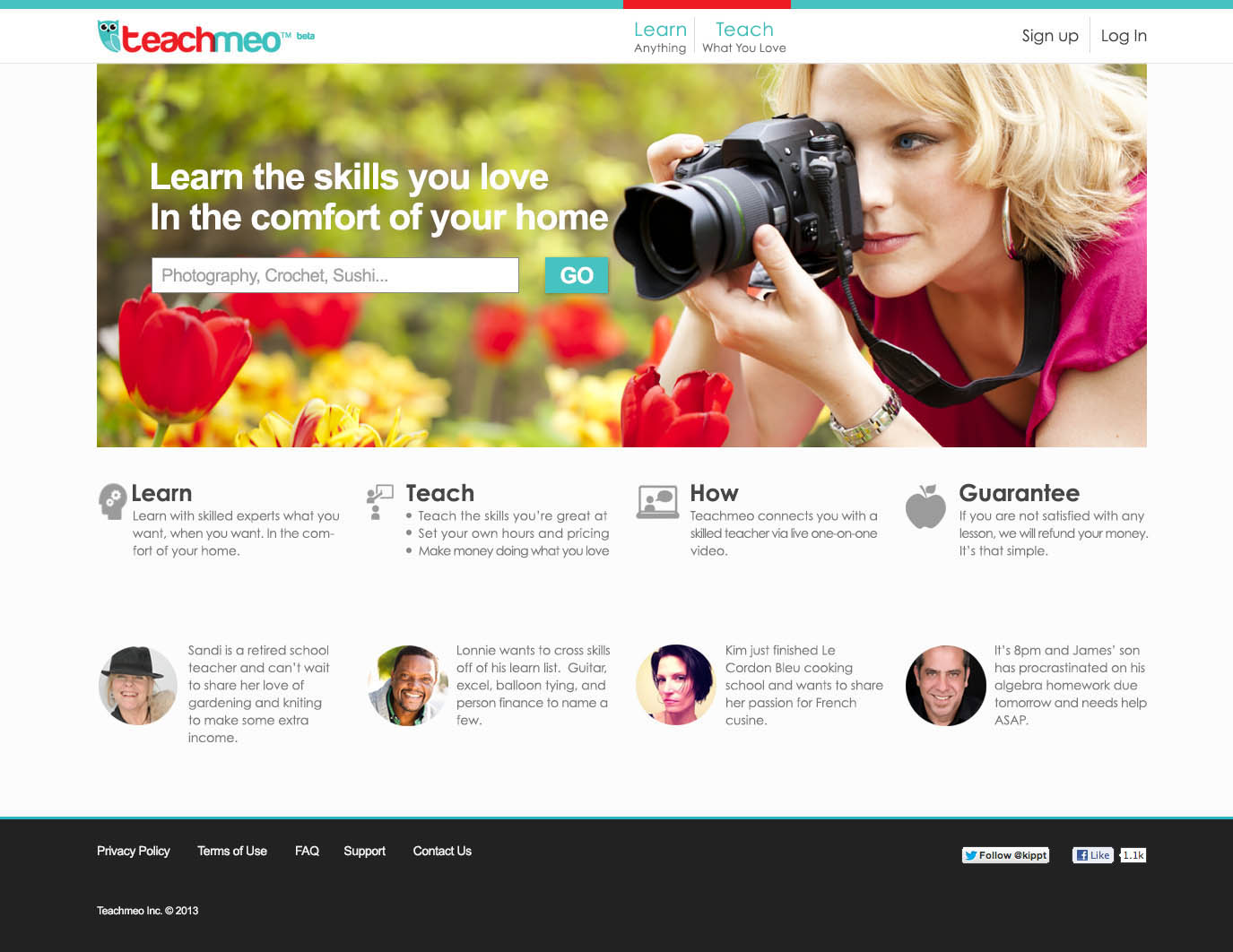 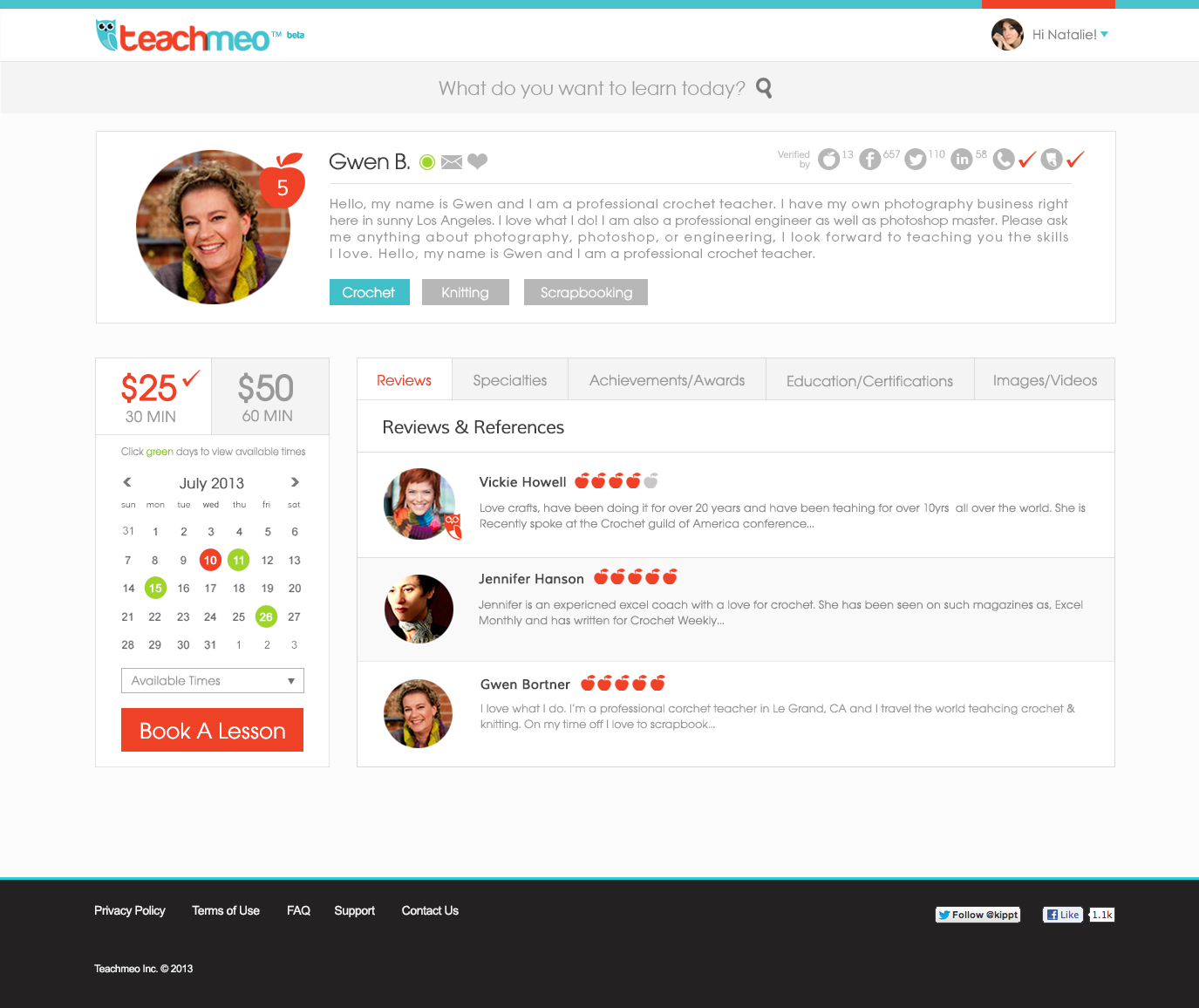 Ambitious entrepreneur, designer, rockstar with over 18 years in management.