Network creates private protected neighborhood sites, over 1,800 have been created for NYC so far 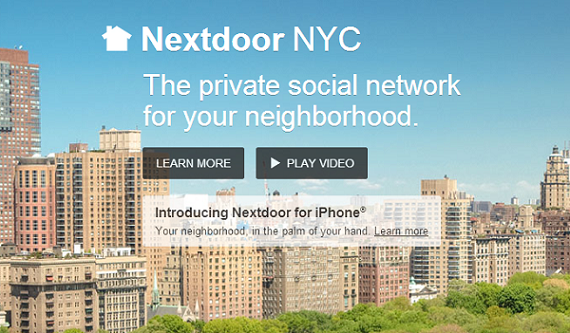 I grew up in  New York City and I can tell you one thing that is absolutely true: you will never, ever know your neighbors. You will probably know what they look like, you might even nod or say hello to them if you are feeling particlarly social that day. But have a conversation with them? Look them in the eyes? Know things about their lives? Ugh, no thank you!

Its easy to forget, though, that being isolated from your neighbors is not a good thing, and that building a strong community, has numerous benefits, not the least of which would getting the word out about local events, school closings and where to go for shelter during potential storms. And knowing who does, and does not, live in your neighborhood can help keep everyone, and especially children, safe.

And that is why Nextdoor, the social network for neighborhoods, has launched into a partnership with New York City, it was announced Friday, to help build stronger communities around the city.

By signing up with Nextdoor, New York City residents will get updated information directly from the city, including news, services, programs, free events, and emergency notifications. These postings will be targeted for a specific neighborhood.

In addition, members of the Nextdoor team will working with the City’s Chief Digital Officer, Rachel Haot, and local field team in New York City to conduct local outreach and training.

“Partnering with Nextdoor is another step forward in our adoption of strategic technology that better serves New Yorkers,” New York City Mayor Bloomberg said in a statement while visiting Nextdoor’s headquarters in San Francisco.. “Nextdoor gives New York neighbors an easy way to connect and communicate with those who live around them. It also provides the City with a direct line of communication to residents about important and often critical updates.”

Of course, the idea behind Nextdoor is not to just have a place where residents get information from the city, but a place where neighbors are able to create private neighborhood sites, where they can get to know each other and ask each other questions, exchange local advice and recommendations, and organize virtual neighborhood watches to reduce crime.

Each website is password-protected and not accessible by search engines, and each member must verify their address to join so that other members can trust who they are sharing their information with. More than 1,800 neighborhood websites, across all five boroughs, have already been created. New Yorkers are able to sign up for the service here.

In February, Nextdoor  launched version 2.0 of the service, which included a newly-designed user interface, the ability for neighbors to reach nearby neighborhoods with relevant information and an enhanced focus on helping neighbors create virtual neighborhood watches to fight crime.

Nextdoor also added a dedicated section for Crime and Safety, with Urgent Alerts so that time-sensitive notifications will be sent out immediately. The service has also added the ability for police and fire departments to share updates with members.

On top of that, there is now also a new Nearby Neighborhoods feature, which lets members share information with surrounding neighborhoods as well, while still maintaining privacy. This feature can be useful in cases such as break-ins, finding a lost pet or promoting a local garage sale.

Nextdoor seems to have touched a nerve with its service, as it has been growing quickly. When it launched in October 2011, its network already contained 176 neighborhoods in 26 states.  Today, the network includes over 14,000 neighborhoods  and more than 120 city governments. Three of the ten largest cities in the U.S., San Diego, Dallas, San Jose, have adopted Nextdoor, and now you can add New York City to that list.