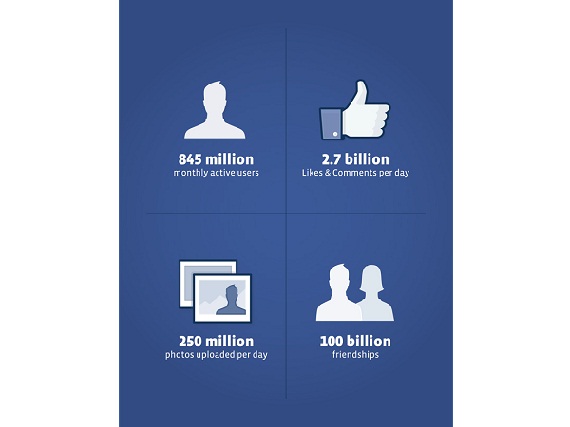 As the entire tech community reels over the immense hugeness and huge immensity of the Facebook IPO, many interesting figures are surfacing, not least of which being that the company now has 845 million users. This figure is up 39% since the end of 2010, when Facebook reported 608 million users.

One report has broken this figure of 845 million users down as a function of the company's $3.71 billion revenue in 2011, which yields a result of $4.39 per user per year. (Don't worry that information won't be required on your taxes.)

Some 483 million of those 845 million users visited Facebook every day, and 425 million monthly active users were on Facebook mobile products in December 2011.

Facebook used to give updates for every 50 million users it gains, though it has discontinued this practice on the last few years, which left concerned tech people to venture their best guesses. For instance, icrossing predicts that, based on the current rate of adoption, Facebook will hit one billion users by this summer.

As far as how those users break down, many had speculated that in the countries where Facebook first broke, like the US and UK, user adoption had slown considerably, or all but halted. However, according to the company's breakdown as attached to today's IPO, this was not quite so cut and dry.

It's true that Facebook usage is exploding in countries like Brazil, which grew 268% in 2011 to reach 37 million Monthly Active Users (MAU), as well as in India, which grew 132% to reach 46 million MAU. However, growth in the United States and Europe was also apparent. US Facebookers grew by 16% in 2011 to reach 161 million, while in Europe MAU reached 229 million.

Facebook's $5 billion IPO is the largest from an American Internet company in history, unseating Google in that category, which had previously held the title at $1.9 billion. However, this was a conservative sum as compared with the estimates of some analysts, which had put Facebook's IPO in the $10 billion range.

Some have speculated that the relatively small $5 billion IPO is due to somewhat weak outings by Internet companies of late, including Groupon, Pandora, and Zynga.