TiVo and U.K.'s Virgin Media have high hopes for their Spotify integration 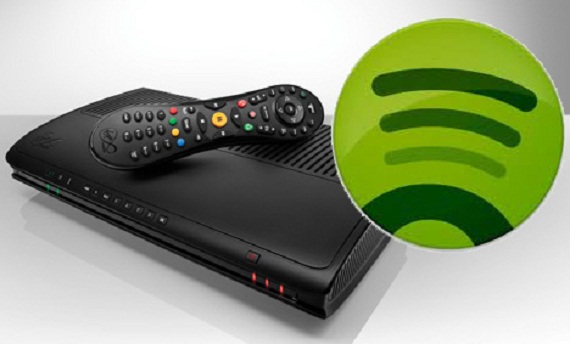 TiVo, in conjunction with Virgin Media, is piloting an integration with Spotify. TiVo is the latest of several set-top devices to integrate the online music streaming service, as Spotify continues to infiltrate users' living rooms.

The unofficial Virgin Media TiVo blog announced a possible deal between Spotify and Virgin Media in July. That deal was recently brought to reality, and as a result several software updates for the set-top box are being piloted to 3500 UK users, which besides Spotify integration also include TiVo app support, Full BBC iPlayer integration, improved parental controls, HD upscaling, and video previews for every channel.

Just last week, Spotify launched an app with Boxee, a set-top device that aggregates entertainment from the Internet and organizes it for the television. Earlier this month on Oct. 6th, Spotify announced a partnership with Western Digital, a company that also manufactures set-top devices. Last July, they integrated with Sonos, a consumer electronics company that manufactures the Sonos Multi-Room Sound System.

Other recent releases from Virgin Media and TiVo include a TiVo iOS app and a Virgin Media app for Android, both released last July.

Last year, Virgin Media became the first company outside the U.S. to secure a licensing arrangement with TiVo, and by July of this year over 50,000 of the company's 4.8 million customers had switched to TiVo, according to the Wall Street Journal. Virgin Media Chief Executive Neil Berkett has indicated that he expects all of Virgin Media's cable customers to be on TiVo within the next four to five years.

The Virgin Media TiVo partnership will face stiff competition in the U.K. from British Sky Broadcasting Group PLC and its Sky Plus set-top box, as well as BT Group ansd their YouView Ltd. project.

One thing is clear, Spotify is expanding and making lots of friends along the way, not least of which being Facebook. During its recent F8 convention, Facebook outlined a laundry list of design updates, including a more prominent  Spotify platform, characterized by its much-publicized "frictionless sharing."

Since fully launching in the U.S., Spotify has secured 250k paying American users. Globally, the company has well over 2 million paid subscribers, according to three company insiders.