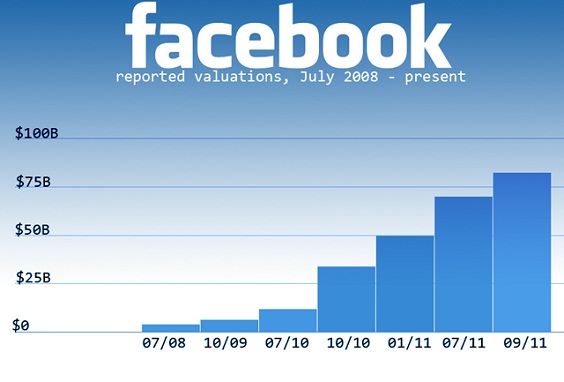 The arrow has been pointing slightly dowwardn for Facebook lately, though for them "down" is clearly still very high. The social networking juggernaut has been valued at around $82.25 billion with shares at $32, based on a shares auction by private company tracking service SharesPost. This is down from around $87 billion in a previous auction.

Earlier this month, Facebook reportedly doubled its revenue in the first half of 2011 to bring in 1.6 billion, with a net income of $500 million. Emarketer estimates the company's total 2011 revenue at $4 billion.

To say that Facebook has experienced "growth" in the past three years would be a gross understatement. The company's market cap jumped from an estimated $4 billion in 2008 to this most recent valuation. Fast-forward to this summer, when GSV invested $6.6 million, then valuing the company at about $70 billion.

As to why Facebook is experiencing this slight downward trend, opinions are split between simple market correction and fallout from Facebook's large-scale redesigns presented recently at their F8 convention. While some insiders have complained over shifting designs and fluxuating privacy policies, Facebook has yet to experience serious fallout from their recent changes.