that the U.S. General Services Administration (GSA) is the latest government entity to switch over to the cloud-based Google Apps suite of software, making the GSA the first U.S. federal agency to do so.

This moment has been in the works since July, when Google Apps became the first cloud computing service of its kind to receive Federal Information Security Management Act (FISMA) certification and accreditation from the U.S. government, paving the way for today’s outcome.

An independent U.S. government agency, like the CIA or NASA but less exciting, the GSA is responsible for supplying other federal purchasers with real estate and product management. The agency’s more than 15,000 employees will now use Google for all their word processing, collaboration and other office suite needs, a big blow to Microsoft, the traditional standard for businesses and governments the world over.

Switching from Microsoft to Google will net the GSA about 50 percent savings over the next five years, according to the government agency.

“Cloud computing has a demonstrated track record of cost savings and efficiencies,” said Casey Coleman, GSA Chief Information Officer.  “With this award, GSA employees will have a modern, robust e-mail and collaboration platform that better supports our mission and our mobile work force, and costs half as much.”

Though the first federal agency to go Google, GSA isn’t the company’s first big government client, as both the city of Los Angeles and the District of Columbia already have ongoing Google Apps deals. GSA may just be the first of many to switch over to Google Apps, however,

“We are reducing our data center footprint by 40 percent by 2015 and shifting the agency default approach to IT to a cloud-first policy as part of the 2012 budget process,” wrote White House staffer Julie Siegel, in a November-published update on the state of IT reform in U.S. government.

Since the very nature of the GSA is to provide resources and services to other government agencies, the entity’s switch to Google’s cloud could forecast a coming mass conversion in U.S. government, which would be a disaster for Microsoft.

Of course, things aren’t all rosy in Google cloud land. Over the summer, the company failed to meet a deadline that would shift Los Angeles municipal employees to its service, due largely to unresolved security concerns. And this week's WikiLeaks imbroglio is unlikely to make it any easier for cloud companies like Google to prove their products are secure.

Watertight or not, however, Google Apps has found a new best friend in the U.S. government. 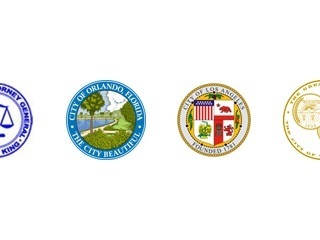 Google Apps gets a government edition