With an increased emphasis on mental health thanks to the pandemic, numerous companies in the space have benefitted from the attention, perhaps none more than Lyra Health. The company raised three rounds of funding across 2020: first a $75 million round in March; a $110 million round in August; and an undisclosed amount in November. That was followed by a $187 million in a Series E round in January.

The company announced on Monday that it has raised yet another round, this time to the tune of $200 million, it's biggest fundraising yet.

Led by Coatue, along with new investor Sands Capital and existing investors, it brings the company's total funding to $680 million at a $4.6 billion valuation, doubling its $2.3 billion valuation from its fundraising in January.

Founded in 2015, Lyra Health is a provider of mental health benefits for employees and their dependents in the U.S. The company uses matching technology and a digital platform to connect companies and their employees, along with their families, to therapists, mental health coaches, and personalized medication prescribing.

Lyra more than doubled its customer base in 2020, and it now serves more than 2.2 million members globally. During that time, the company launched Lyra Blended Care, combining video therapy sessions with personalized digital lessons and exercises based on Cognitive Behavioral Therapy (CBT) principles. Lyra also announced a partnership with Calm in December, allowing Lyra's employer partners to offer Calm as a benefit to their employees.

The company plans to use this funding to further expand its international presence with a series of new tools and offerings, which it outlined in a separate news release on Monday. One of those is going to be a unified digital platform, where members will be able to access all of Lyra’s care options and services, including preventive care, mental health coaching, therapy, and medication.

Lyra will also be implementing Lyra Essentials, which it calls "a broad portfolio of preventive mental health resources curated to support members around the world." That will include well-being tools, videos, and tactics covering mental health topics such as parenting, stress, sleep, overcoming setbacks, relationship issues, and thriving at work. In addition, Essentials will also include new meditation exercises that will be created and tailored based on Lyra member utilization data, as well as feedback from members and employers.

Finally, the company plans to expand its mental health coaching internationally as well.

"Lyra believes effective care is culturally responsive, requiring an approach that is both evidence-based and hyperlocal, addressing the unique needs of people where they live," Kaitlin Rebella, Senior Manager of Corporate Communications at Lyra Health, told me.

All of these services are expected to be available for Lyra's international members in 2022, and they build on the company's partnership with ICAS, a global employee assistance program (EAP) provider, which was revealed in January.

While COVID pushed the mental health crisis to the forefront, so much so that by January of this year over 40% of adults reported symptoms of anxiety and/or depression, it didn't create the problem, just exacerbated it.

"The COVID pandemic wasn't the beginning of the mental health epidemic that we face; rather, it highlighted this need that we're experiencing and companies continue to take it very seriously. The World Health Organization estimates that the loss in productivity due to depression and anxiety costs the global economy $1 trillion annually--and that figure was reported pre-pandemic," said Rebella.

Lyra’s mission, she told me, is to redefine mental health care and, to do that, it is going continue to invest in new technologies and services that provide faster access to care that delivers fast and durable improvement.

"We believe that integrating technology and expert clinical care will transform how mental health care is accessed and delivered," Rebella said.

"Lyra is committed to providing evidence-based mental health care - treatments that have been rigorously tested in randomized controlled trials - because they have been specifically proven to work. Today, as many as 80 percent of therapies offered in the market have not been empirically tested and proven to work." 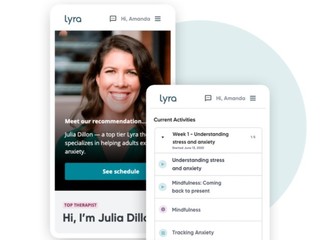