When Crossover Health was young: the early years 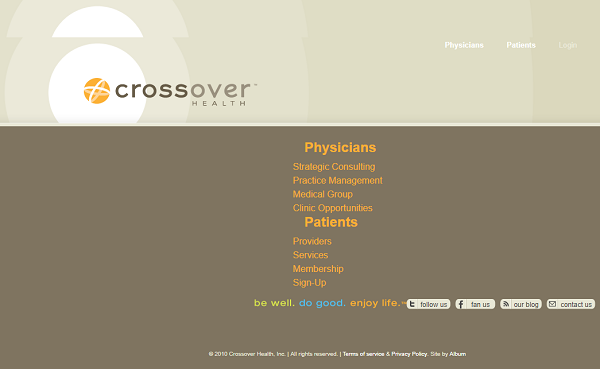 This segment is on Crossover Health.

"The book highlighted the need for health care providers to reorganize into systems of care fueled by technology, financed in a way that rewards best outcomes and patient experience, and organized to create a virtuous cycle of innovation," the company writes on the Yelp page for its clinic in Aliso Viejo, CA.

Initial company description: "Crossover began as a consulting firm helping organizations transition to more efficient medical practice, adopt social media, incorporate patient centered principles, and other efficiencies. This led to a realization that in order to fully implement our vision of change we would need to demonstrate these practices with our own branded clinics."

First blog post, one month from founding: In July 2007, Shreeve makes his first post on the Crossover Health blog in which he quotes lyrics from LL Cool J's “Mamma Said Knock You Out"

"I actually have alot of blogs queued up for review and will be jumping back on the Health 2.0 train, consumerism, and the interesting world of the healthcare revolution shortly," he writes.

Blog post, at one year and four months from founding: In September 2008, Shreeve writes a blog post in which he discusses the benefits of a member-based primary practice model.

"While every individual will have different priorities, I would suggest that these extra dollars could create significant value by enrolling in a direct practice relationship with a primary care physician. In this arrangement, the member would have 24×7 access to the physician, see the physician in an office/home/virtual setting, have care coordinated across medical conditions and across care environments, proactive preventive measures being actively undertaken, medical advocacy support, and someone whom you absolutely trust who can help you navigate your health. Essentially, a personal medical director, working with your personal medical staff, to ensure that your personal health objectives are met. An unbelievable value (outcome/price) to help you manage your most valuable asset," he writes.

"Is this really possible? Do these numbers really jive? Is this type of individual consumer experience really available? It absolutely is. They absolutely do. It is absolutely coming. Membership based practices really do have their privileges and those privileges are going to rapidly be extended to the masses."

Beta launch, one year and seven months from founding: In January 2009, Crossover Health launches the beta version of its personal health advisory service to South Orange County residents and employers.

"Crossover Health provides a new category of health offering, called personal health advisory services, which are designed to provide members with a personal medical advisor to oversee and coordinate all aspects of their health and wellness. The new service appeals to individuals and families with high deductible health plans, those wishing to establish a medical home, and physician groups wanting to augment their concierge medicine offering," Shreeve writes in a blog post.

Logo, at two years and 10 months from founding: In April 2010, Crossover unveils its logo.

"Our developing model is to provide excellent access through our urgent care, deliver a service experience that dazzles the patients, create an incentive to become a member of our practice, and as a member have access to a wide array of innovation communication tools that make online, anytime, and anywhere health services possibles. These capabilities got us thinking about how we should position this to the patients who are unfamiliar with our model. We came up with the following as a visual sign to the 75,000 or so cars that pass by our walls every day," writes Shreeve.

Incorporation, at two years and 10 months from founding: On April 21, 2010, Crossover Health is incorporated in California. 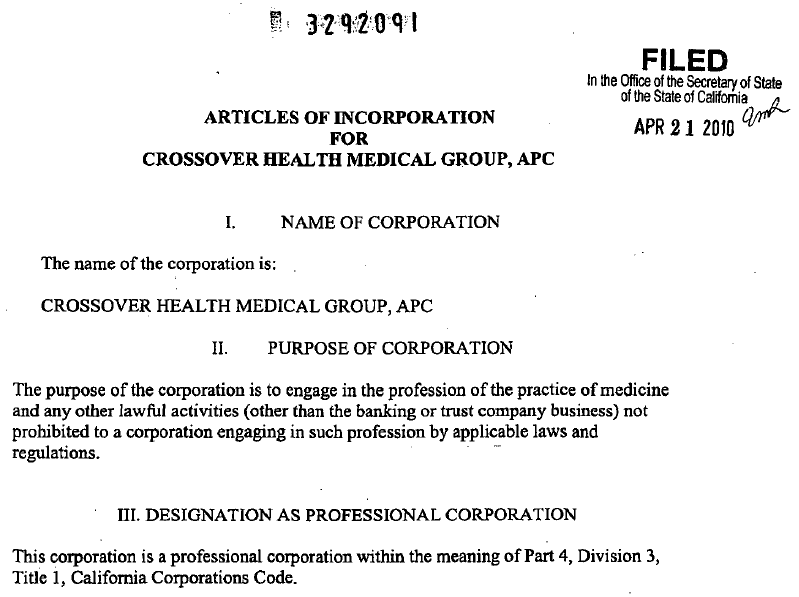 Personnel, at two years and 10 months from founding: In April 2010, Richard Patragnoni joins the company as its Chief Medical Officer.

Personnel, at one year and 11 months from founding: In May 2010, construction starts on Crossover's first clinic.

Launch, at three years and four months from founding: In October 2010, Crossover announces the opening of its flagship membership-based, primary care practice in Aliso Viejo, California.

“The membership-based practice model allows Crossover Health to fundamentally change the way health care is practiced, delivered, and experienced,” Shreeve says in a statement. “Crossover has been specifically designed to restore and enhance the patient-physician relationship, increase access and convenience, reduce the cost of health care, and deliver an unprecedented patient experience.”

Following the launch, Shreeve does a video walkthrough of the new clinic.

Customers, at three years and four months from founding: When Crossover Health starts, it only has one B2B client: Apple.

“I think Apple saw something in our design and our approach and the way we were thinking about the patient experience,” Shreeve says in 2018.

Product, at three years and eight months from founding, four months from launch: In February 2011, Patragnoni introduces Crossover Fitness, which gives patients access to a fitness instructor, a nutritionist and others, along with a gym, to help them with develop healthy lifestyle choices.

"In medical care, we realized that managing patients went far beyond just using medicines, laboratories, office visits. We knew we were not reaching goals with our patients. We developed this team-based approach to medical care that involved not only managing their medical issues but, also, looking at fitness, nutrition issues, things like that. We wanted to try to change lifestyles and the way we did this is through Crossover Fitness," he said in an introductory video.

Team, at four years and 11 months from founding, seven months from launch: In May 2012, Crossover Health announces that Bret Jorgensen, former CEO MDVIP and InSight Health, has joined the company as Board Chairman.

“I have been fortunate to be on the forefront of several large health care trends. It is clear to me that worksite health, is a powerful market segment from which to transform health care. There is significant need, and opportunity, for management companies like Crossover Health to help guide this transformation and become the trusted advisor of the overall health care spend,” Jorgensen says in a statement.

“Moreover, Crossover Health is uniquely positioned to ride this innovation wave due to its care delivery model, the unique technology it is leveraging, and the talented team that has assembled around the idea of creating next generation health.”

In July 2013, Crossover raises its first funding, a $6.5 million round from undisclosed investors. It has since gone onto raise $113.5 million, including a $92 million round in 2016, from investors that include Gurnet Point Capital and Norwest Venture Partners.

Today, Crossover Health has locations in California, Idaho, New York, Nevada, Texas and Massachusetts. It currently operates a 20 clinics and serves nearly 200,000 people. It now has 45 clients and 200,000 members.

In February of this year, Crossover Health made its first acquisition, buying telemedicine startup Sherpaa.