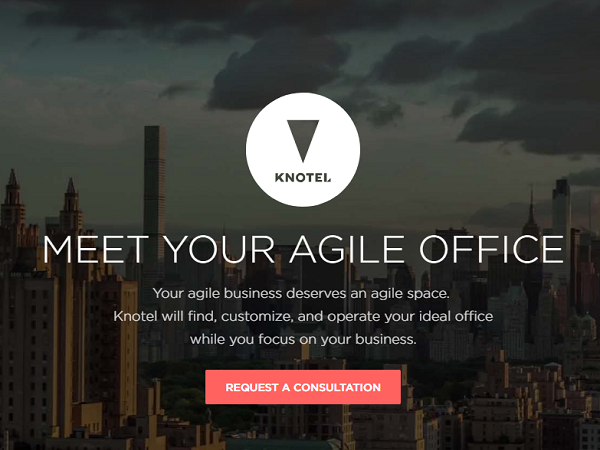 Forget virtual reality and augmented reality, self driving cars and all the other technologies that have been making headlines in recent years. The real game changer has turned out to be blockchain.

Decentralized data sets, which are most trustworthy and harder to alter, are going to revolutionize a whole bunch of different industries, including real estate. Knotel, a provider of flexible office space, wants in on the ground floor of that revoluion and that's why is revealed last week that it purchased 42Floors, a search engine for commercial real estate.

Since being founded in 2016, Knotel has inked more than one million square feet of office space in New York, San Francisco, London, and Berlin. In New York’s Chelsea neighborhood, for example, Knotel says it has been responsible for nearly 30 percent of all deal activity since the start of this year.

With this deal, Knotel says it will have access to data and technology on over 10 billion square feet of office space, allowing it to launch a new data platform using 42Floors' technology.

Founded in 2011, 42Floors had raised $17.4 million in venture funding from investors that included Thrive Capital, New Enterprise Associates and Bessemer Venture Partners. No financial terms of the acquisition were disclosed.

Amol Sarva, CEO and co-founder of Knotel, spoke to VatorNews about why 42Floors is a good fit for his company, why he believes in blockchain and what he sees as the future of the real estate space.

VatorNews: How did you first get to know 42Floors? How will the company help Knotel achieve its goals?

Amol Sarva: 42Floors and Knotel came together as Jason Freedman (co-founder of 42Floors) and I got to know each other. The way we see it is: 42floors is the front door and Knotel is the building.

42Floors will enable us to bring real estate into a new era. The company was developed inside Y Combinator, is backed by incredible investors, and is the search engine champion for a data set covering 10 billion square feet of office in the US and now the world.

VN: It says in the press release that the acquisition will help with “accelerating plans for a blockchain platform.” Why is blockchain important for the future of Knotel? How does 42Floors fit into this part of the business?

AS: Commercial real estate needs a better system for tracking and managing space listings. The rest of the world is going digital, but real estate hasn’t changed in a century.

Blockchain, and the technology of 42Floors, will help organize and open access to billions of space listings, freeing up hierarchies and complicated structures.

VN: How many members of the 42Floors team be coming to work at Knotel? What will they be working on when they get there?

Working on aggregating commercial real estate data and continuing to serve users of 42Floors. This data is also helping to build out Baya.io, the new blockchain effort.

VN: Will 42Floors continue to exist as a service in or outside of Knotel? If it is shutting down, what is the time frame for that?

AS: 42Floors will continue to operate.  Serving landlords, tenants, and brokers across the U.S. and soon abroad.

Knotel will incorporate the great technology that 42Floors has built into our blockchain offering. Knotel reaches 30% of all transactional activity in various markets in NY, London, SF, Berlin and beyond, and with this world-class data set, we will make the platform even bigger.

VN: Will you be incorporating any of 42Floors' technology? If so, what will that look like for your customers?

AS: Knotel is launching Baya.io, a Knotel-backed, 42Floors-fueled platform that will open its doors to cooperation from the largest information providers, brokerages, tenants, and information services providers in the world as partners. The platform will pay providers for data, and make it easier for the world to buy and use data, cleanly and in a trustworthy way.

VN: How has the real estate space evolved in recent years? Where do you see it going next?

AS: While digital has touched and transformed nearly every industry, real estate is still stagnant. The tides are turning and change is happening, especially with the evolution of flexible office space and the enthusiasm on the part of companies to embrace more flexible options, but CRE tech hasn’t lived up to its promise. The real power to change this industry lies with blockchain, and bringing light and truth to a dark market.