Meanwhile, visits from social grew 146 percent in a year, though it still lags behind other channels 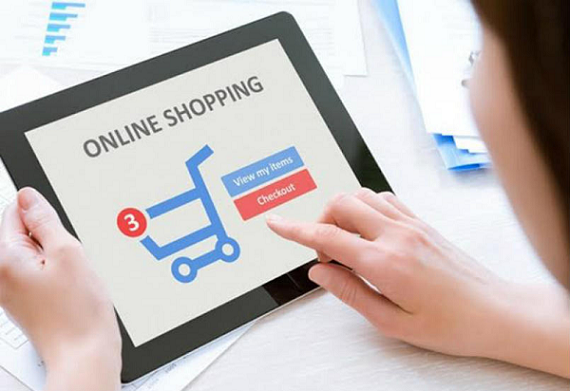 There have been some extremely important shift in the last few years in the retail space. The most obvious one is, of course, the rise of people doing their shopping online instead of going to a physical store, though that is not as pronounced as you might think, accounting for 8.5 percent of all retail in the first quarter of this year, according to the U.S. Census Bureau. The other shift is the number of people shopping on mobile device, rather than on a desktop.

These trends are showing no signs of slowing down; in fact, they're actually ramping up, according to the Retail Industry Report put out by Adobe, which found that not only is mobile about to become more popular than desktop for the first time ever, but that social is quickly establishing itself as an extremely important channel for marketers as well.

I spoke to Michael Klein, the Director of Industry Strategy for the Adobe Marketing Cloud, about what some of these numbers mean and where he sees the online retail industry trending in the next few years.

Mobile is going to overtake desktop

Likely the most important metric in the Adobe report has to do with mobile, where smartphones about to surpass desktop for the first time ever in terms of where users are going to do their online shopping. 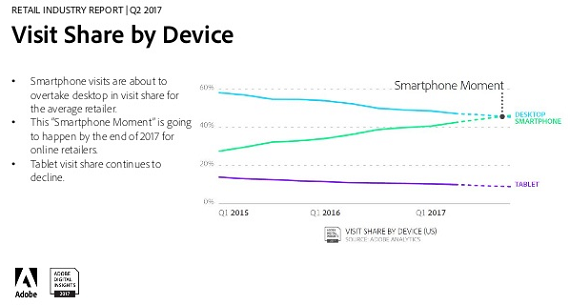 "Last year, if you followed the holiday forecast report, we had several specific days, Thanksgiving, Black Friday, where we experienced mobile traffic eclipsing desktop traffic for those particular events. We're seeing a trend where, within the next couple of months, that will not only be a singular, one day event occurrence, but it will be just the nature of the trend," said Klein.

This also is the result of larger smartphones, like the iPhone Plus models, which have eaten away at tablets.

However, even though smartphones are going to be first in terms of traffic, they are still lagging behind desktop in terms of revenue share and conversion rates. While people are shopping on their phones, they are completing the transaction on a computer. 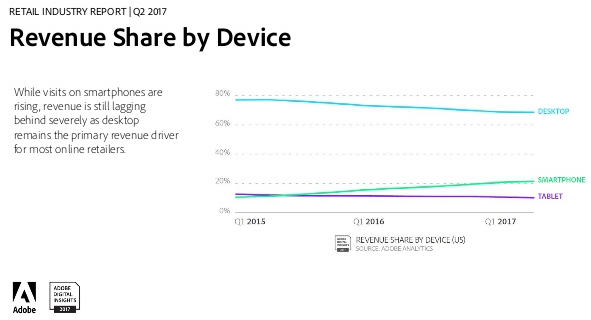 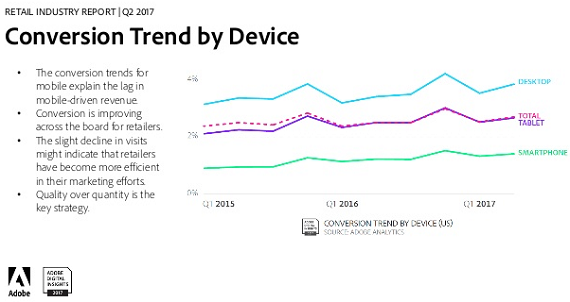 According to Klein, though, that's not a problem as retailers don't need mobile to be the fastest growing or largest portion of their revenue. As long as they are seeing growth, then everything is fine. In fact, even a couple of years from now, he thinks mobile will still be generating a minority of revenue.

"The challenge that we would pose to a retailer that may be looking at those metrics is, while there's always room for improvement, I would be never be concerned, nor set off an alarm, that I'm not getting the conversions that I want on mobile. Now, if I had a downward trend, that obviously would be a problem, however I don't need it to be the dominant place for transactions," he told me.

Retailers have the ability to spend in multiple areas, and don't need to only rely on mobile for sales.

"That's where the idea of attribution and mapping out the customer journey is so important because, not unlike the idea of advertising and acquisition, I have the ability to spend my money in paid search, display, social media, affiliate marketing, and it's the push and pull of how much do get from one to another, but they're all important in my overall program. I can't just look at mobile from a conversion and a revenue perspective, because if I have the right lifetime value of the customer, and they're getting good utility and it's helping them along their consideration and awareness to retention and loyalty, then I need to consider all those factors."

Another key takeway from the report is that, since 2015, online retail visits have been seeing minimal growth from year-to-year. 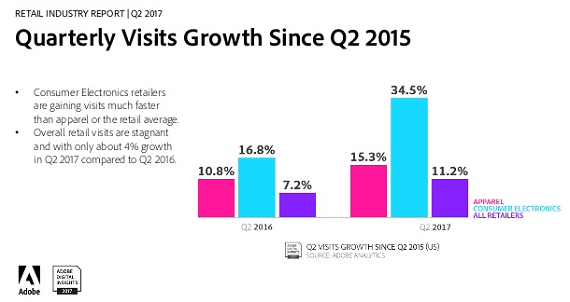 Part of that may be due to market saturation, since there are only so many users who can do their shopping online, but there could be another reason, Klein told me: a more savvy consumer who doesn't need to visit as many stores to find what they want.

A spearfisher, in this case, means someone who can be more targeted in their approach. They don't need to spend time browsing for places to shop since they already know where to go to get what they need.

"Spearfishing can be thought of in a variety of ways. In the larger scheme, I may have several particular brands that I go to consistently. We also see some consolidation of the industry, with some of the acquisitions that have happened over the last year, but then also we don't always live in the paradox of choice. When I do get to a website, it may not have as many products, or they've optimized better than they were in the past, to get me quicker to the product that I'm looking for."

Going back to the data around mobile visits, that may also be having an effect on online shopping overall, as people who shop on mobile tend to not go shopping on different websites, he said.

Interestingly, there are two retail verticals that have managed to buck this trend: apparel and consumer electronics, both of which have innovated their business models. For apparel, that has meant the rise of subscription services like Bonobos and Trunk Club, where they have married the digital and physical spaces, particularly with box services where people have clothing delivered to them at their own convenience. For consumer electronics, that has meant "finding unique programs with their brand manufacturers to drive a great omnichannel experience."

When I asked him if other verticals will be adopting some of these same techniques to also increase their online sales growth, Klein said that they will, but that it won't be as simple as just replicating what apparel and consumer electronics have done.

"One might be passionate about their electronics or their television or their gaming, their home in terms of furnishings, and you think about some of the success from that we've seen from a Home Depot and home furnishings with William Sonoma and others like that, but when I think about Target or big box retail or just commodity products, I may not necessarily get excited about it," he said.

Almost all retailers will adopt certain technologies, including loyalty programs and CRM, but for grocery and big box stores, part of the solution will be around helping customers get around the store with in store capabilities and shopping lists.

"It's not going to be one size fits all. While we've seen certain successes in apparel and consumer electronics and some other subverticals, it's going to be what works best for the nature of that product and the expectations of the consumer that associates to that product."

The rise of social

The other key takeway is that social is growing much, much faster than any other marketing channel, jumping 146 percent in a year, compared to 45 percent for paid search. 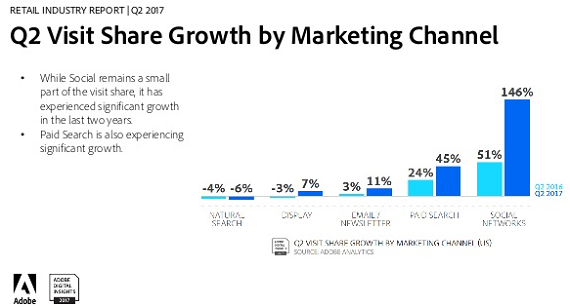 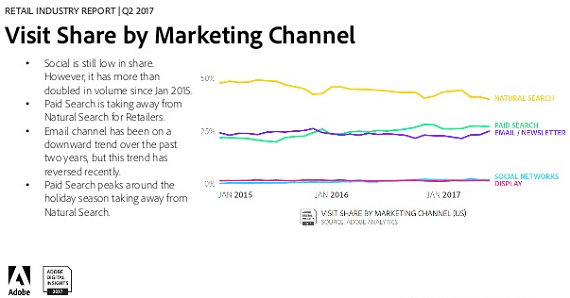 That likely will not change any time in the near future.

"If I look at the numbers now, and where the numbers have come, I think that it's certainly going to grow but I don't see it eclipsing any of those channels anytime soon," Klein said.

"I think social will continue to grow, I don't know if it's going to erode any one particular channel. It's going to take away a little bit from all the larger percentages. You may see two or three percent come away from natural or display, but I don't see it completely going that way."

However, he did admit that that may change depending on how future generations of consumers spend their time.

"The only consideration I would think of is how do the generations from Millennials to the Gen Zs work through and how they're going to behave. What is the next generation and how are they going to behave? That is certainly a big conversation in the marketplace, the emerging consumer behaviors and the consumer spend that they're going to command over the next couple of decades."

So what does this report all mean? That the trends that retailers were already seeing, such as the move to mobile and the rise of search, are continuing.

"My overall take on this is that we're reaffirming these trends. While we're seeing certain areas having less than double digit increases in traffic, we saw huge increases year-over-year many years ago. Whether it's saturation or just this is the way are behaving, and we're at something of a mature stage in that respect, we still see most of these numbers in some way shape or form going up. It reaffirms a lot of the trends we've seen," said Klein. 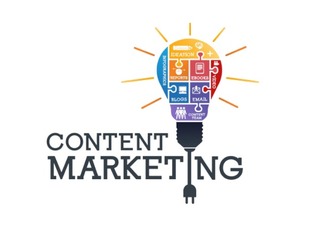 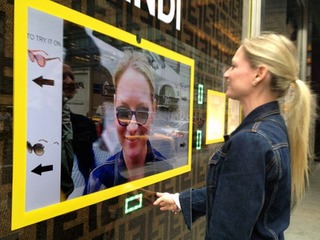