Your world is full of placebo buttons

Technology we use makes us feel good and in control, even if it's just in our heads 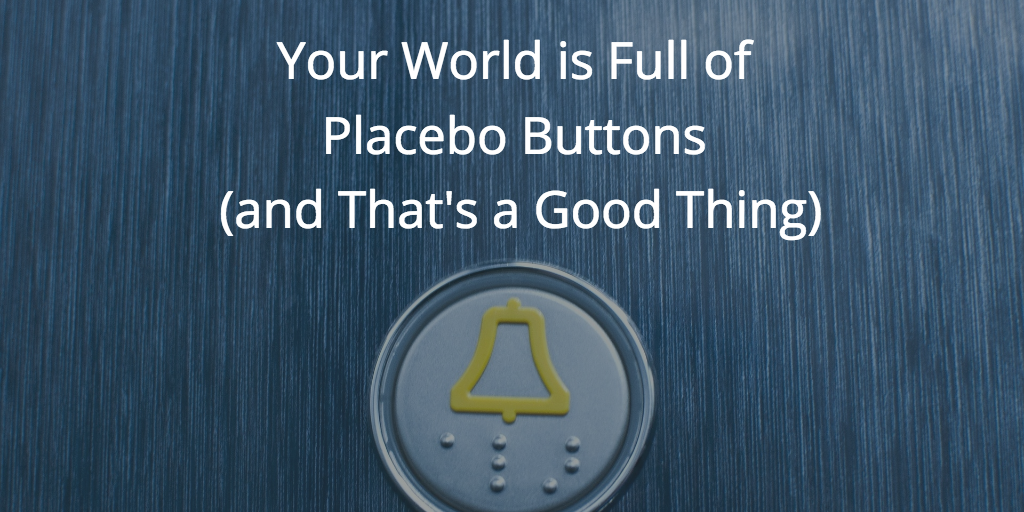 All products and services, everything we buy and use, have but one job—to modulate our mood. The fundamental reason we use technology of relief is tantamount to actual relief. Consider the so-called placebo button.perception of all sorts, from stone tools to the latest iPhone, is to make us feel better. To prove the point, consider how

Take, for example, the lowly crosswalk button. When we find ourselves at an intersection, waiting for a light to change, we tap the button, sometimes more than once. Most people believe these buttons are connected to some master control box that will signal the light to change so we can cross the street. In truth, these buttons often do nothing.

The crosswalk button is a relic of the age before computer-controlled traffic signals. In New York City, for instance, “the city deactivated most of the pedestrian buttons long ago,” a New York Times article reported in 2004. Of the 3,250 walk buttons in the city at the time, some 2,500 were not functional. And yet, theTimes noted, when faced with the buttons, “an unwitting public continued to push.”

Then there are elevator buttons. Have you ever noticed someone pushing the call button on an elevator when it’s already lit? I must admit I’ve done it myself. Particularly when I’m in a rush, I want to make sure the button has been pressed correctly—as if there were a way to press it incorrectly. It’s a wholly irrational response, yet in the moment, I can’t help myself. When I push the button, I feel better.

Why? Because discomfort is often alleviated by action—by our doing something that makes us feel in control, even if, in reality, we have no control whatsoever.

Once inside the elevator, you may notice a hurried passenger pressing the close door button repeatedly, in hopes of speeding things along. But the button is another example of what’s known as a “mechanical placebo.” According to a 2008 article in the New Yorker, the close door buttons included in most elevators since the 1990s do not actually work the way passengers think. The buttons are installed for emergency personnel, not for the general public. Firefighters use the buttons to open and close doors between flights, but they can do so only with a key or other special instructions.

So why do we keep pushing the darned buttons? Of course, not all the buttons we encounter in our daily life are nonfunctional all the time. But how are we to know the difference? The crosswalk eventually flashes WALK, and the elevator door eventually closes. But rarely do we question whether a causal relationship exists.

In an essay on this topic in 2010, the author David McRaney observed: “If you happen to find yourself pressing a nonfunctional close-door button, and later the doors close, you’ll probably never notice because a little spurt of happiness will cascade through your brain once you see what you believe is a response to your action. Your behavior was just reinforced. You will keep pushing the button in the future.” 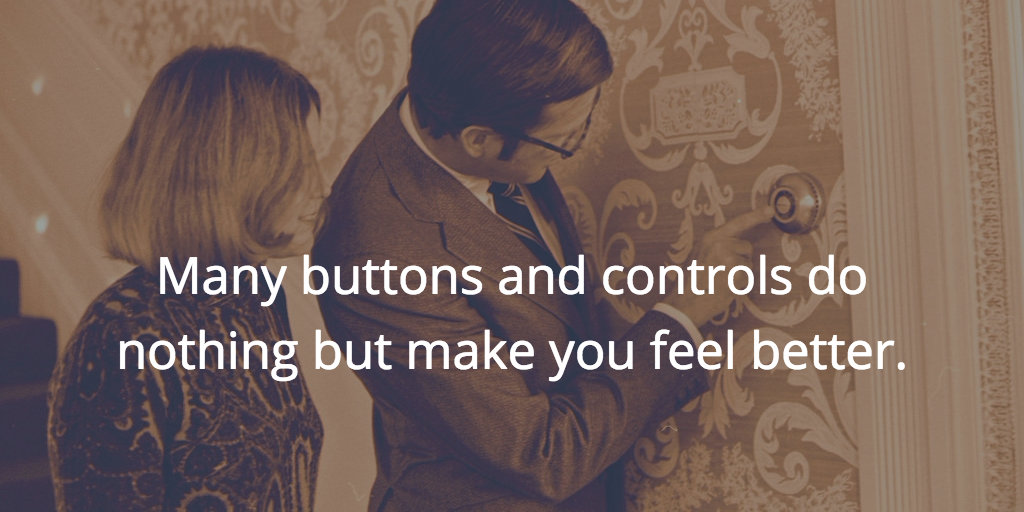 Other controls are put in place for explicitly psychological reasons. If you work in an office building, there is a good chance your attempts to regulate the temperature in your office are just as futile as pushing a crosswalk button. With the advent of building-wide control systems, individual office thermostats often do little more than decorate the walls.

Giving workers the ability to regulate their own climates is expensive and often incites, a climate control professional in Tennessee, Perakes temperature wars, in which employees continually adjust the thermostat, wasting energy and inflaming tempers. However, building managers and air-conditioning specialists have found ways to placate workers. Greg told an industry publication, “We had an employee that always complained of being hot.” Instead of giving the woman her own air-conditioning setup, Perakes decided to give her something else: the illusion of control.

Perakes provided the worker with a dummy thermostat connected to a small air pump. The pump drew air from the main climate control system through a rubber tube. Though the system did not actually change the temperature of her office, the pump made just enough noise for the employee to hear. “When she heard the hissing air coming … she felt in control. We never heard another word about the situation from her again. Case solved.”

Perakes is not alone in this slightly shady practice. A 2003 web survey appearing in the industry publication Air-Conditioning, Heating and Refrigeration News revealed that 72 percent of industry professionals admitted to installing dummy thermostats. Many climate control veterans subscribed to the words of HVAC engineer Joe Olivieri, quoted as saying “Thermal comfort is 90 percent mental and 10 percent physical.”

By connecting the actions we take with what appears to be a result, we form associations between behavior and outcome, even if there is no relationship between the two. We feel stress, we push a button, we experience some relief; something occurs after we push the button, and even if there’s no way to know whether it’s a direct response to our actions, we continue to feel relief.

Though it’s easy to feel deceived when confronted with a reality that challenges our perceptions, the technology doesn’t actually lie to us—after all, these buttons are inanimate objects. More accurate would be to say that the technology helps us comfort ourselves. And the number of products that enable this self-comfort is far greater than you probably realize.

Much of the technology we fiddle with daily—our phones, our games, our apps—we use not only because of what they do, but because of how they make us feel. By giving us a sense of control, products can alter our mood and provide relief—even when it’s all in our heads.

Nir’s Note: The New York Times published a piece on a similar topic today. I’ve been working on this post (in spurts) for years. Seeing their post pushed me to stop delaying and finally hit publish on this essay. I hope you enjoyed it. If you did, please share it.

You may also enjoy reading:

Nir Eyal is the author of Hooked: How to Build Habit-Forming Products and blogs about the psychology of products at NirAndFar.com. For more insights on changing behavior,join his free newsletter and receive a free workbook.