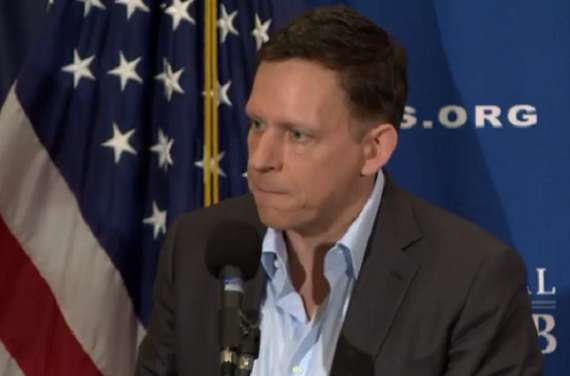 Peter Thiel has made big waves this year by supporting Donald Trump for President, something that has proven to be a very unpopular position to take in Silicon Valley.

He was a California delegate for Trump, thereby helping him secure the nomination, and he spoke at the Republican National Convention in July, getting the spot right before Ivanka Trump came out to introduce the candidate himself.

All of this has caused major controversy, which reached a head after it came out that Thiel was actually going to bankroll the Trump campaign, donating $1.25 million. Suddenly, his peers in Silicon Valley were seriously talking about ostracizing both Thiel, and anyone who defended him.

Thiel came under such heavy fire that he felt the need to defend himself publicly, speaking at a National Press Club speakers newsmaker event on Monday about why he supports Trump for president.

"Real events seem like they're rehearsals for Saturday Night Live," he said. "Only an outbreak of insanity would seem to account for the unprecedented fact that this year a political outsider managed to win a major party nomination."

The election, though,"is less crazy than the condition of our country."

He used his time to criticize baby boomers, or "the generation that supplies most of our leaders," the fact that older people have huge medical costs, younger people hold a large amount of student loan debt and that incomes have stagnanted in the face of rising costs.

He was also very critical of the foreign wars the country is currently fighting, echoing this line from his RNC speech, "Instead of going to Mars, we have invaded the Middle East... It's time to end the era of stupid wars and rebuild our country."

While Silicon Valley is "doing just great," that doesn't apply to most Americans who "haven't been part of that prosperity." Thiel’s support for Trump comes from the fact that he’s only person running right now who hasn't been a part of all of the failures of the last two decades.

"It shouldn't be surprising to see people vote for Bernie Sanders or for Donald Trump, who is the only outsider left in the race,” he said.

Thiel made it clear that he doesn't agree with "everything Trump has said and done," specifically mentioning the now infamous Access Hollywood tape from 2005, in which Trump talked about using his power and influence to have his way with women.

"Nobody thinks his comments about women were acceptable. I agree they were clearly offensive and inappropriate," Thiel said. "But I don’t think voters pull the lever in order to endorse a candidate's flaws. It's not a lack of judgment that leads Americans to vote for Trump. We're voting for Trump because we judge the leadership of our country to have failed."

Despite all of his flaws, Thiel believes that Americans who are voting for Trump are doing so because of the "big things" he "gets right." That includes his stances on free trade, and the trade deficit.

Trump will also stop the type of thinking that have led to multiple bubbles forming over the last two decades.

"For a long time, our elites have been in a habit of denying difficult realities. That's how bubbles form. Whenever there is a hard problem, but people want to believe in an easy solution, they'll be tempted to deny reality and inflate a bubble," he said.

Ultimately, Thiel believes Trump is signaling a shift in the political system, one that will change that type of thinking, and one that "isn't crazy and it's not going away."

"He points toward a new Republican party, beyond the dogmas of Reagaism. He points even beyond the remaking of one party, to a new American politics that overcomes denial, rejects bubble thinking, and reckons with reality," said Thiel. "When the distracting spectacles of this election season are forgotten and the history of our time is written, the only important question will be whether or not that new politics came too late." 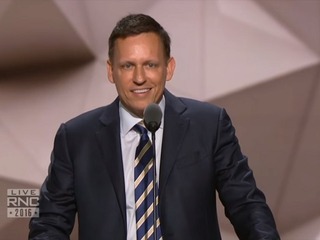 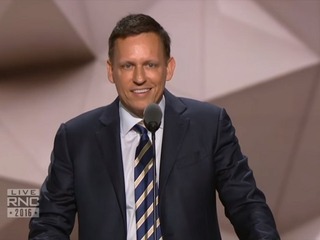 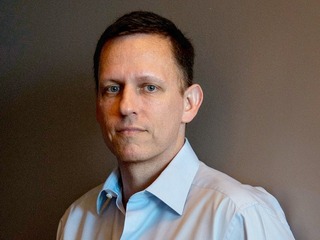