Thiel is the first person to declare he's gay at the RNC, but most still disappointed 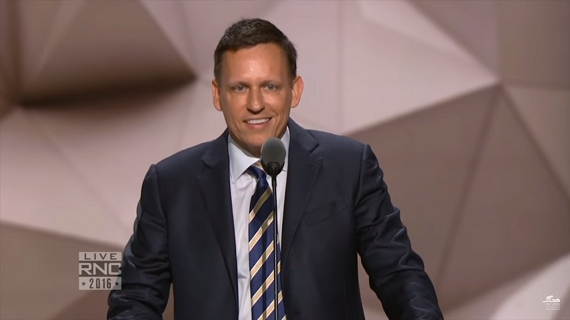 Tonight, on the fourth night of the Republican National Convention, we finally got to hear the speech that all of us were waiting for.

No, not Donald Trump's. I'm speaking, of course, of Peter Thiel, who could not have had a more high profile spot, speaking right before Ivanka came out to introduce the candidate himself.

Thiel, who is also a delegate for Trump representing California, seemed like an odd choice for such a high profile speech, mainly because he's such an important member of the tech community, a group that has very little love for Trump as a whole. His being there, however, showed just how much of an independent thinker he is. Too many people in Silicon Valley, are lemmings in their thoughts and investments.

More notably, Thiel is also openly gay, making him the first RNC speaker to hold that distinction since Arizona Representative Jim Kolbe all the way back in 2000.

No other speaker had ever declared themselves to be gay at the RNC before.

There was a lot more to Thiel's six-minute long speech, of course. Here are some of the best quotes:

As I said above, Silicon Valley, overall, is no fan of Trump, making Thiel something of an outlier in the community. So it's not a surprise that the reaction to his speech from his contemporaries was mixed, at best, with most of the reaction coming on the negative side.

On substance: to say that this is a fake culture war is the biggest bullshit line I’ve ever heard. 2016 is a war over who we want to be.

1/ Most interesting part of Thiel's speech that no one will talk about is the "proud to be republican" part. Not once did he say why...

This is the thing I most don't understand. Peter really does believe Trump is anti-war. https://t.co/uN53stqD95

Peter Thiel (@peterthiel) is a contrarian. As the world laughs at Trump, he is asking people to vote for him. https://t.co/0LuED4LaC7 …

No one can argue w Thiel's VC track record. & I don't know him personally. But in the spirit of being hard on the problem, not the person...

...his speech described ideals that are not reflected in the GOP platform. Pence believes therapy can cure homosexuality....

....as immigrant, Peter & family had chance to build life in US. Trump wants to close borders & judge people by their country of origin..

...& Peter takes great pride in the depth of his intellectual mind. Trump can't focus on an issue, proud of not reading a book...

Of course, some were also proud of Thiel, not only for speaking his mind, but of being brave enough to say what he said. That included Kyle Zink, marketing lead of Project Ara at Google, and Michael Dearing, founder of Harrison Metal.

I was raised Repub. To see a self-made gay man stand up at the podium and be himself is a big freaking deal. Historic and gives me hope.

Some decided to take some of the air out of the speech by using humor, including Aaron Levie, founder of Box and Mark Twomey, a Technical Director in the CTO team for EMC's Data Protection & Availability Division.

Thiel just delivered the first tech speech in the last year that didn't have an AI bot launch in it.

I can say after watching that acceptance speech is the Republicans are lucky it's an Ivanka Trump / Peter Thiel ticket.

And at Nikolai Yakovenko, a member of the deep learning team at Twitter, while a big fan of the speech, was just thankful the speech didn't go on forever.

By the way, Thiel's speech was very very good. And short.

You can see Thiel's entire presentation below: