This is a fundamental shift in how candidates get their message out, completely unfiltered 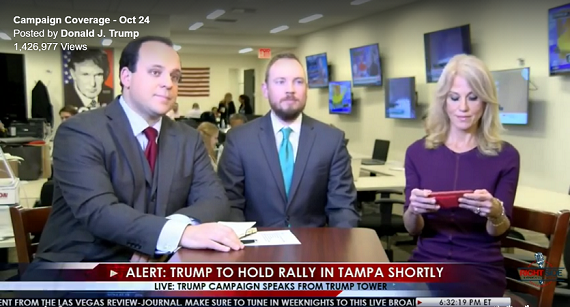 Say what you will about Donald Trump and his campaign, and there is a lot that could be said, but it has been fascinating in its use of social media. More than any other candidate before him, Trump has turned to new media as a way of bypassing traditional modes of communication, reaching out directly to his followers without a filter.

He has used Twitter, essentially, as a press release wire, and now he's taking the most recent advancement in social media, the ability to stream live video, to bypass the media altogether.

The Trump campaign announced that it would be broadcasting its own nightly campaign coverage show, starting Monday night and lasting until the end of the campaign on November 8.

"Join us LIVE at 6:30pmE! Our nightly campaign coverage from Trump Tower!" the post says. "This is a HISTORIC movement. Together, we will once again make a government by, for, and of the people! Help us close out the final weeks of this campaign strong and WIN."

The campaign first tested the waters of broadcasting its own Facebook live show last week, with a live feed of the third debate, followed by interviews with guests like Rudy Giuliani, Jeff Sessions and Eric Trump. That broadcast was viewed over 9 million times; last night's broadcast didn't prove to be nearly as popular, getting 1.4 million views.

There has been a lot of speculation in the media recently about what Trump's main goal is at this point. With his numbers, and his chances of actually winning, seeming to be dwindling fast, many now believe his campaign's focus is on launching a media empire, ostensibly to be known as Trump TV.

A report from the Financial Times on Monday stated that Jared Kushner, Trump's son-in-law, had contacted Aryeh Bourkoff, head of a boutique firm known for media deals, in order to basically take advantage of the movement Trump's campaign had started. He likely won't win this election, but he still has 40 million people who will vote for him and, presumably, will want to continue hearing what he has to say after the campaign ends.

The campaign, of course denies that that's the goal with these broadcasts, framing them as a way to give followers Trump's message, unfiltered by traditional media.

“We all know how strong the left wing media bias is. This is us delivering our message to voters,” Epshteyn told Wired. “It has nothing to do with Trump TV. It’s about using 21st century technology and communication in a way that’s effective.”

The fact that the campaign is using #TrumpTV on its videos does potentially suggest another motive, however.

Social media has, without a doubt, changed the way politicians interact with voters. We've seen that with the White House, which has also used social media to get its unfiltered message out.

Even more than using Twitter or Snapchat to post messages directly to the people, though, harnessing the power of live video is a totally different ballgame. It represents a fundemental shift in how candidates have to use the media.

In decades past, if a candidate wanted to be taken seriously, there was only one way for them to become known. That is no longer the case. Now, dandidates won't have to fight for airtime, or only be able to get their message out if the media allows them to. Social media has become the ultimate weapon against the influence of traditional media.

Whether this is a good thing or a bad thing remains to be seen. Say what you will about traditional media, but there is something to be said for the idea of a gatekeeper, of an institution who's role it is to inform the public, and to protect them from potentially harmful candidates by holding their feet to the fire. If every candidate, Democrat or Republican, can go out and spread their message without being questioned, that may not be in the best interest of the public.

It will also be interesting to see if social media really does bring change to our electoral process, or if, as I suspect, it will be a lot of candidates speaking to the converted.

Make no mistake: traditional media still has far more reach and power than social media, at least currently. Just look at the numbers from the third debate: while Trump's broadcast was seen 9 million times, the TV audience was 72 million people. For now, candidates will still need to find their way onto the networks if they want to broaden their base beyond their social media followers, but there is a chance that, in future campaigns, that will no longer be the case.

I should point out the irony of Trump being the one to facilitate this change. After all. he's the one has received $3 billion of free advertising from the very same media he now so badly wants to cut out.