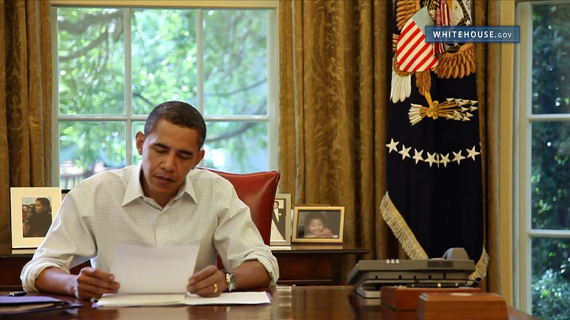 Remember that social media barely even existed before he came to office in 2009. At the time, Facebook and Twitter were a few years old, but nowhere near as popular as they are now. Instagram and Snapchat didn't even exist yet. So, considering how new the technology is, I'd say that the White House has done a pretty good job of understanding it, and using it to its advantage.

The latest social media advancement to come from the White House is a new Facebook Messenger bot, which allows citizens to send notes directly to the President. He will then, so they tell us, read and respond to personally (I have my doubts about whether the President ever actually answers letters himself, but let's just go with it).

"Getting a word in with the President has always been one of the White House’s most popular citizen services," the White House wrote in a blog post on Wednesday, announcing the launch of the bot.

"Face-to-face time is a little harder to come by these days, but technology makes it possible for anyone with an internet connection to send a message to the President and his Administration. The White House’s Messenger bot, a first of its kind for any government the world over, will make it as easy as messaging your closest friends."

I tried out the new bot and here's how it works: first, go to the White House account, where you will see this welcoming message, "Hi! It’s great to hear from you—and we’re excited to learn what’s on your mind."

After that, the bot makes absolutely sure you're ready to message the President, so you better have a good question ready! 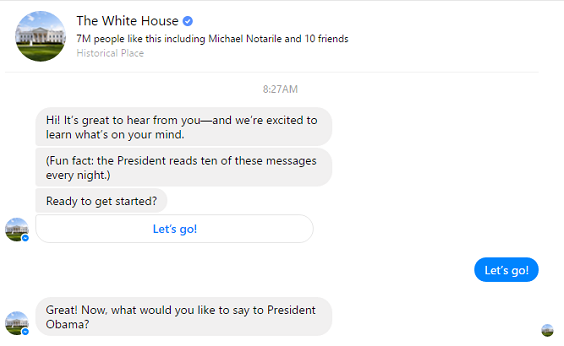 Once you type your message, the bot will make sure, multiple times, that this is really what you want to say to the leader of the free world.

"Got it. Is that your whole message?" it says, causing you to doubt yourself and wonder if you should have more to say to the person running the country.

"Now, let’s double-check that this is what you want to send the President (this is your chance to catch any typos!)..." says the bot, undermining all of your confidence.

If you find the will to proceed, the bot will start asking you all sorts of invasive questions, like what your zip code is, your address, email address and phone number, in case your question was so profound that the President feels like calling you to discuss it.

Some may balk at giving this bot all of this personal information, until they realize that the government is secretly watching them through the webcam on their laptop anyway. They've seen you naked, so who really cares if they have your email address?

Once that's all done, you get a short video from Obama, explaining why he likes answering letters. Oh, and a smiley face as well, which is a nice gesture on their part. Seriously, they didn't have to do that. 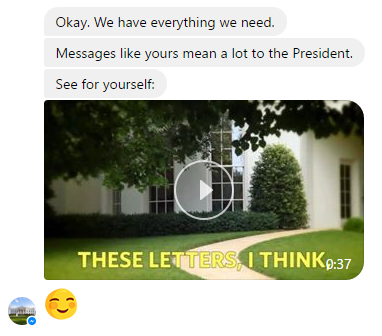 The blog post notes that, every night, President Obama reads 10 letters, something that "has been a part of his daily routine since taking office in 2009."

There's no indication about whether or not the messages sent to him via Facebook will be included in those 10, or if he's going to increase that workload.

A Messenger bot is just the latest way that the President and his staff have used advances in technology to get their message out, and to foster a deeper relationship with citizens.

In January the White House even joined Snapchat, as did the First Lady in June.

My favorite White House related social media account, though, has to be Joe Biden on Instagram, which he joined in 2014, and which launched with a picture of the Vice President's Ray Ban sunglasses.

Like it or not, social media has become a crucial part of running the government. It allows the White House to better control its message, and to get information out directly to the people without needing to go through traditional media channels.

To see how much social media has changed politics, look no further than Republican nominee Donald Trump, who has become infamous for his Tweeting. He has used the platform in an unprecidented way, in many ways bypassing the media power structure that has controlled access for so many years.

Of course, Trump also shows the downside of that filter being removed, as he has gotten himself into trouble multiple times, including retweeting white supremacist groups, and that time he used the platform to insult Ted Cruz's wife.

Trump's itchy Twitter finger should actually serve as a good lesson for all politicians, and future Presidents: social media is a powerful tool, so use it wisely.