Verizon buys Yahoo for $4.8B, combines it with AOL

Marissa Mayer says she is staying, though it isn't clear what role she will play going forward 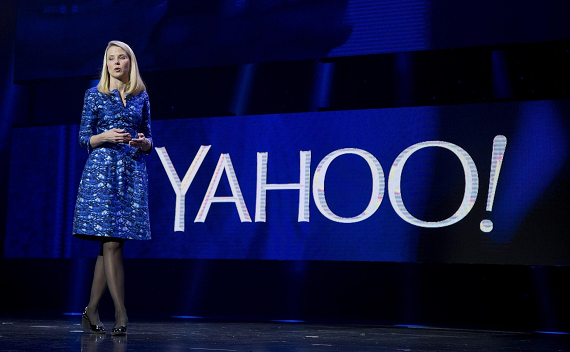 The writing has been on the wall for Yahoo for a while now. After multiple quarters in a row of losses, and frustration with CEO Marissa Mayer over her spending habits, shareholders were openly asking AOL to take over the company as far back as 2014.

In the end, that's pretty much exactly what wound up happening, as Verizon, which bought AOL for $4.4 billion last year, announced on Monday that it has acquired Yahoo for almost the exact same price, $4.83 billion in cash.

As per the deal, Yahoo will be integrated with AOL, in a unit run by Marni Walden, EVP and President of the Product Innovation and New Businesses organization at Verizon.

Together, AOL and Yahoo have 25 brands, including Yahoo Mail, which has roughly 225 million monthly active users. Other brands include Flurry, the mobile analytics firm that Yahoo acquired for $200 million in 2014, and Gemini, a native and search advertising solution.

For Verizon, much like its purchase of AOL, this deal represents a way for the company to enhance its advertising platform.

“Just over a year ago, we acquired AOL to enhance our strategy of providing a cross-screen connection for consumers, creators and advertisers,” Lowell McAdam, Verizon chairman and CEO, said in a statement. “The acquisition of Yahoo will put Verizon in a highly competitive position as a top global mobile media company, and help accelerate our revenue stream in digital advertising.”

According to eMarketer, Yahoo made $1.67 billion in display ad revenue in 2015, for 3.4 percent of the worldwide ad market, while Verizon properties, including AOL, have only 1.8 percent, so there's real potential for Verizon to stake a much larger claim through this deal. Of course, that's nothing compared to Google and Facebook which, together, cover about half the ad market in the U.S.

Until the deal closes, which is expected to happen in the first quarter of 2017, Yahoo will continue to operate independently, "offering and improving its own products and services for users, advertisers, developers and partners."

Verizon is not acquiring all of Yahoo's assets; the company's cash, its shares in Alibaba Group Holdings, its shares in Yahoo Japan, Yahoo’s convertible notes, certain minority investments, and Yahoo’s non-core patents will continue to be held by Yahoo. Eventually those assets will become their own publicly traded investment company, with a new name.

That sounds pretty similar to what Yahoo was originally planning to do, before it announced it was scrapping those plans in favor of what it called a "reverse spin off" last year. That plan was for Yahoo’s assets and liabilities, other than the Alibaba stake, to be transferred to a newly formed company.

Details about the new company are scarse right now, and Yahoo says it will provide additional information about the investment company at a future date.

One of the big questions going forward is what will happen to Mayer. Her departure from the company has seemed imminent for a long time, yet she has always managed to hang on, despite pressure from her own board to go. According to a memo sent out by Mayer to Yahoo staff on Monday morning, she has no plans for that to change any time soon, though it isn't clear what her role will be.

She also praised the deal as an opportunity for Yahoo, once one of the the most valuable companies in the world, to "build further distribution and accelerate our work in mobile, video, native advertising, and social."

"As one of the largest wireless and cable companies in the world, Verizon opens the door to extensive distribution opportunities. With more than 100 million wireless customers, a shared view of the importance of mobile and video ad tech, a deep content focus through AOL, Verizon brings clear synergies to the table," she wrote.

"Joining forces with AOL and Verizon will help us achieve tremendous scale on mobile. Imagine the distribution challenges we will solve, the scale we will achieve, the products we will build, and the advertisers we will reach now with Mavens – it’s incredibly compelling."

The fall of Yahoo

No matter how Mayer tries to spin this, a sale of less than $5 billion represents a major fall for a company that was once a prize tech company, though that was long before she ever got there.

At its peak, on January 3, 2000, Yahoo had a market cap of $128 billion, more than twice that of Walt Disney Co. Even as recently as 2008, Microsoft was offering nearly $45 billion for the company. Now the company was just sold for a tenth of that price.

It would be easy to lay this at the feet of Mayer, who has been running the company for the last four years, but that would ignore all that went on before she came to work at Yahoo, including its history of troubled CEOs.

Yahoo's first CEO was Tim Koogle, who was appointed in 1995, until he was replaced by Terry Semel, who became CEO in 2001. He lasted until 2007, and was replaced by Yahoo co-founder Jerry Yang.

After that, it got really dicey, with no other CEO lasting more than two years. Yang was replaced by Autodesk's CEO Carol Bartz in 2009, but she only held the top spot until 2011, when she was fired over the phone. Bartz’s ouster was seen, by some, as an example of sexism in Silicon Valley.

PayPal President Scott Thompson took over in January 2012. His tenure at Yahoo was marred by failure and scandal, and he was forced out after four months over a resume fudging scandal, where it came out that Thompson had lied about degrees he had received as an undergraduate.

Mayer was the first CEO of Yahoo in a long time to make a real impression, and she had big ambitions, including building Yahoo out as a video hub, buying up content and creating original series, including a season of canceled NBC show Community. Those plans utimately failed.

She was so criticized repeatedly for her willingness to spend company money on acquisitions, though she did admittedly overspend quite a bit, like when she bought Tumblr for over $1 billion. That deal turned out to be a disaster, as Yahoo was forced to write down half of the company's value over the course of two years after it couldn't meet its sales goal.

Whatever anyone thinks of Mayer's tenture, one thing that's for sure: Yahoo became a more valuable company under her tenure. She took over the job as Yahoo CEO on July 16, 2012. At that time, the company had a market cap of $18.63 billion. As of today, it's doubled to $36.5 billion, though it is still down from its peak of $49 billion in November 2014.

Neither Verizon or Yahoo shareholders seem particularly pleased with this deal. Verizon's stock is down slightly, 0.6 percent, to $55.76 a share, while Yahoo is down 2.41 percent to $38.43 a share. When Mayer took over, Yahoo's stock was $15.65 a share.