The only quarter that saw more funding was Q1 of this year, with $1.43 million 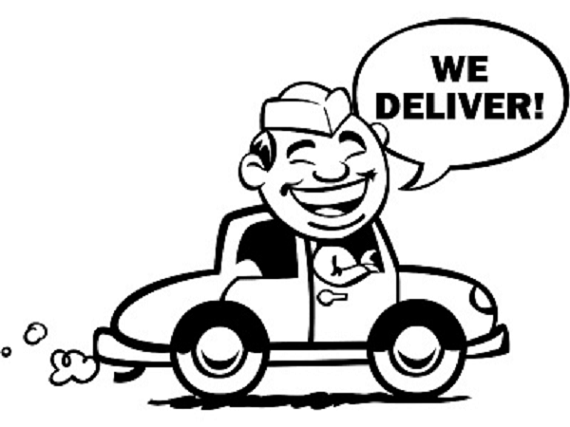 We have mentioned before how much activity the food delivery space has been seeing this year. Indeed, just today, yet another company raised funding, this time at a $1 billion valuation. Companies in the space include companies that deliver meals, as well as online ordering platforms and meal kit delivery companies.

There are so many companies in the space that it's hard to keep track. Blue Apron, Chefday, Din, Gobble, GrubHub, HelloFresh, Maple, Munchery, Plated, PlateJoy, Postmates, SpoonRocket and Sprig are just a few of them.

There has been so much going on in the space, in fact, that it is now reaching new highs, according to new data out from CB Insights.

In the third quarter of this year, startups in the food technology space raised $1.25 billion in 74 deals, by far the most deals in at least the last four years. The numbers of were up significantly from the previous quarter, which saw $896 million raised in 59 deals. On a year-to-year basis, the space was up 55 percent in terms of dollars, and 111 percent in the number of deals.

However this latest quarter could not match the $1.43 billion raised by food companies in Q1. 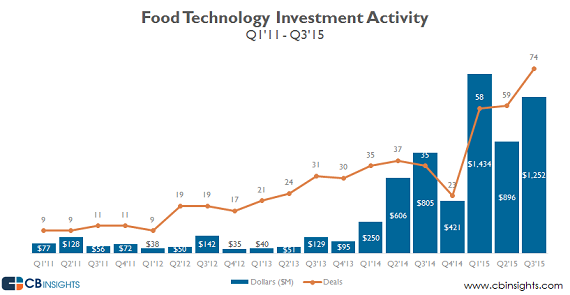 If you've been following the space, then you know that much of the activity goes on outside of the U.S. Food delivery is a global space, and I mean global, with startups in seemingly every market.

Take Rocket Internet, which spent $700 million in one day in February on investments and purchases in the food delivery space, including in Berlin-based Delivery Hero.

It also made a €130 million ($147.4 million) investment in HelloFresh, which is also based in Berlin. Rocket also made some acquisitions buying up Southern European online food takeaway companies La Nevera Roja in Spain, and Pizzabo in Italy and seven companies in Asia.

While the U.S. steal leads, other countries are seeing increased dealflow as well, especially India, which grew from only four deals in 2013 to 45 deals already this year.

This includes larger financings to grocery delivery startups such as BigBasket and PepperTap, as well as food ordering startups including TinyOwl and Swiggy.

China, Germany and the United Kingdom all surpassed their 2014 deal totals in the first nine months of 2015.  In fact, all five of the largest deals in the  third quarter went to international companies. The largest was the $630 million raised by China-based online food ordering platform Ele.me (which means “Are you hungry?”). 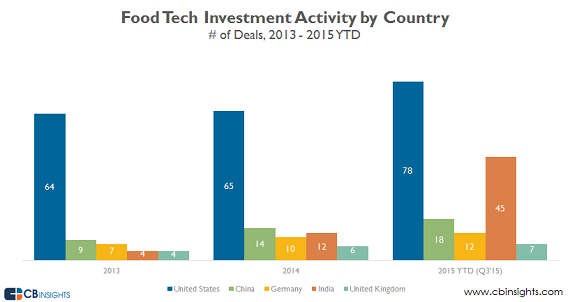 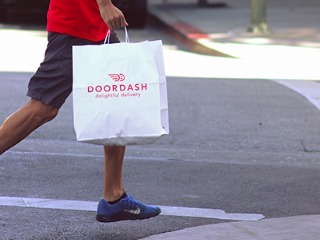