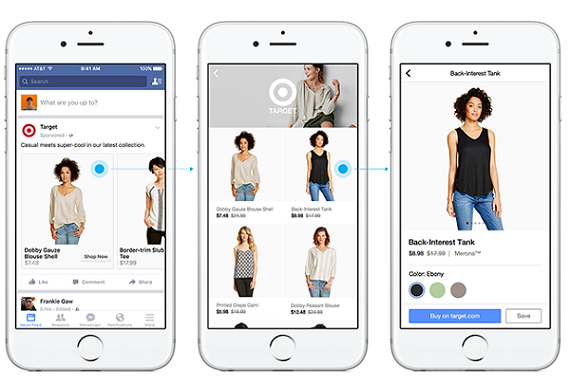 Facebook makes its money from advertising, but it's made clear that it has greater ambitions than that, and that the company wants to go even further when it comes to goods on the site. It not only wants users to see new things, but to buy them without ever having to leave Facebook.

It's a pretty ambitious goal, and one that could give Facebook a big new revenue stream, if it works. Facebook's ads are already effective in leading all other companies in referral traffic, with nearly 25% in June, much higher than Pinterest or Twitter. And some think that a buy button could add 10% to the company's revenue.

Given the opportunity in e-commerce, especially with the massive size of Facebook's audience, it's not surprising that Facebook wants make it even easier for its 1.2 billion users to find goods to buy, so the company announced on Monday two new initiatives: not only a new feed specifically for shopping, but also new ad formats dedicated to allowing users to buy goods.

Noticing that "people discover new products across multiple areas on Facebook," including News Feed, Pages, and Groups, the company has decided to streamline that process by testing a single place where users can "more easily discover, share and purchase products."

Coming in the next few weeks, the Shop section will be tested with a limited set of small businesses, and only in the United States. The company also said it will eventually start including more content, such as items listed for sale in Facebook Groups.

The products listed under this section will no doubt will come with buy button, which allow customers to buy products goods that they see on the network without ever having to leave. Facebook first launched it back in July of last year. Earlier this year it partnered up with Shopify to allow its merchants to advertise and sell their products.

On top of the feed, Facebook also released a new type of mobile ad, called Canvas, which it says will solve the problem of clicking on a product in an ad, then having the page load slowly.

Canvas ads, instead, are meant to be "immersive," meaning that users get to see a preview of the Webpage directly from the ad, where they will also be able to browse products. The ads won't include a buy button, and will require going to the retailer’s website to purchase, but they will also allow users to stay inside Facebook until they are sure they've found what they're looking for.

There are two benefits to the e-commerce push for Facebook. The first, as I mentioned, is a potential new revenue stream. And the second is an even biggest push into mobile.

"People have shifted to mobile. It’s the fastest adoption of a communication technology in history, and it’s changing how we connect with each other and discover new things. Businesses, however, are still making the shift," the company wrote.

"This behavior—that’s already happening on Facebook—gives us a chance to make people and marketers’ experiences better. We want to build native experiences that make it easier for both people to discover products on mobile and businesses to drive more sales."

It seems like a long time ago that anyone doubted Facebook's mobile strategy. Right after the company went public it had a rough time convincing anyone that it could make it work. How foolish we all look now, as mobile now accounts for the vast majority of the company's earnings.

In its last quarterly earnings report, mobile accounted for 76% of the company's advertising revenue. Advertising is, of course, by far Facebook's biggest revenue stream.