Compose, which provides database management solutions for developers, will remain independent of IBM 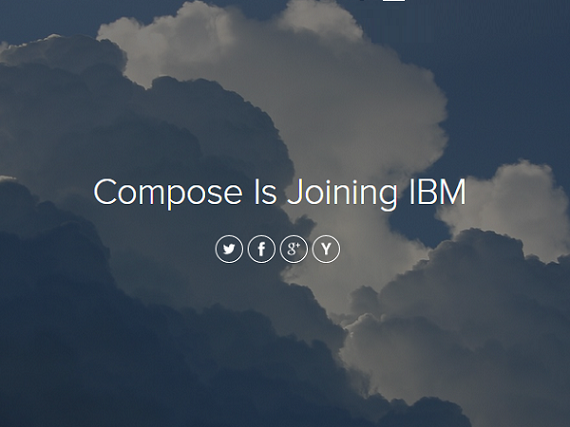 IBM has acquired database-as-a-service startup Compose, it was announced on Thursday. No financial terms of the acquisition were disclosed.

Compose, a graduate of Y Combinator, is a DBaaS (database as a service) company. It helps developers spend their times building their applications rather than wrestling with database provisioning and maintenance. It does this by providing database management solutions for developers utilizing MongoDB, Redis, Elasticsearch, Rethink & PostgreSQL for data storage.

For IBM, the company says that this acquisition will help it extends its Cloud Data Services and Bluemix portfolios, something it started to do when it purchased DBaaS company Cloudant last year.

“Compose furthers IBM’s commitment to ensuring developers have access to the right tools for the job by offering the broadest set of DBaaS service and the flexibility of hybrid cloud deployment.”

As per the deal, Compose is now part of IBM’s Cloud Data Services business, which is led by Derek Schoettle, General Manager, and part of the IBM Analytics group.

Compose becoming part of the Cloud Data Services group is "a great fit," Kurt Mackey, founder and CEO of Compose, said in a blog post

"We'll be able to continue building what we think is important, with a brand we really like, and the same team that works so well together. All with the backing of a major company."

Little else is changing for Compose, or its customers, though. The company will be expanding its data centers, but customers can stay in their current centers if they like them. Customers will still get support from Compose, which will actually be expanding to more regions for faster response times.

While current prices are staying the same, Mackey does hint of a future collaboration between Compose and IBM, noting that it may "have new product and pricing options for customers in the near future who want even more control over their datacenters and databases."

"If you're a customer, nothing is changing. It's simply getting a little more credible," Mackey said.

IBM has been pivoting itself over the couple of year as a cloud services company, as its hardware and software businesses lose steam.

Last year it announced it was spending $1.2 billion on new cloud data centers, and, in October, IBM partnered with Microsoft  to provide their respective enterprise software on Microsoft Azure and IBM Cloud. IBM also entered into a global partnership with Apple last year as well. It most recently partnered with Box to integrate services, and collaborate on new apps designated for specific industries.

These moves has allowed IBM to stay relevant in an ever-changing tech ecosystem.