It's time for Silicon Valley to walk the walk on racism

The CEO of Slack railed against racism, but is Silicon Valley actually trying help the problem? 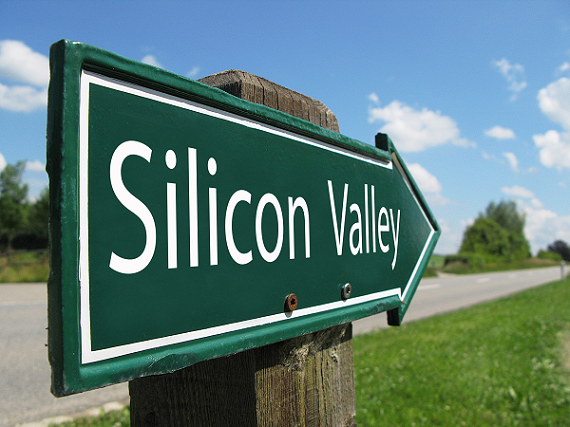 Ever since a gunman walked into a historic black church in Charleston, South Carolina last week, and opened fire, killing nine innocent people, in an apparent attempt to start some kind of race war, the discussion about race in America has, once again, been ignited.

It's a topic we have been talking about a lot lately, with a series of killings, by police and civilians, which have sparked the national debate. And, with that, we have also been showered with a whole host of think pieces on that very topic.

One such piece ran in the Wall Street Journal last Thursday, in an editorial entitled, "The Charleston Shooting: An echo of 52 years ago, but also a crucial difference." The crux of the article: that the country is not as racist as we used to be, and that instiutional racism is a thing of the past.

"Amid the horror of Charleston, it is also important to note that the U.S., notably the South, has moved forward to replace the system that enabled racist killings like those in the Birmingham church," the Journal wrote.

"What causes young men such as Dylann Roof to erupt in homicidal rage, whatever their motivation, is a problem that defies explanation beyond the reality that evil still stalks humanity. It is no small solace that in committing such an act today, he stands alone."

The piece is relatively short, but it caught the eye and the ire of Slack CEO Stewart Butterfield this weekend, who went on an explosive rant against the Journal. There were a lot of tweets, but here are just a few of them (warning: there is a little profanity). 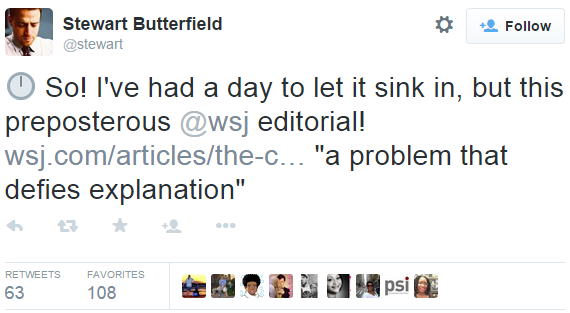 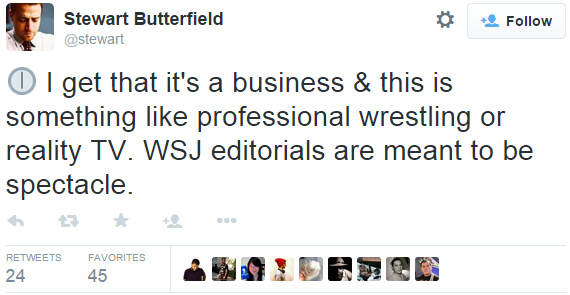 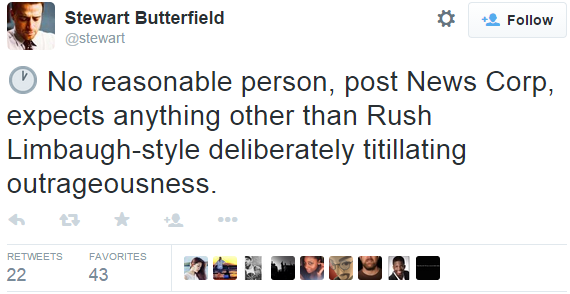 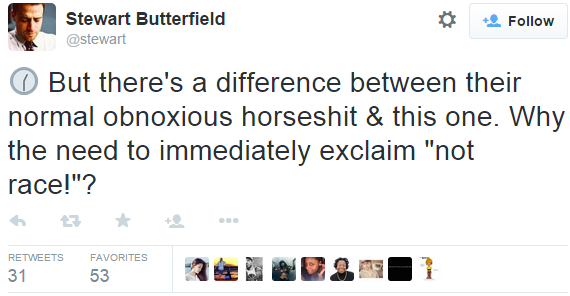 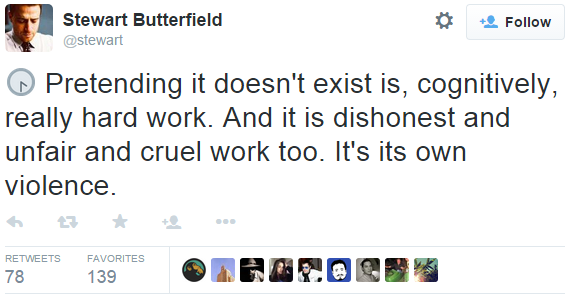 Whether you think that Twitter is really the right medium for this type of discourse (I maintain that it is not) or if you think that literally saying "fuck you" to the Wall Street Journal editorial board undermines his message, it's obvious that Butterfield's heart is in the right place here.

Silicon Valley is a liberal place. Shocking, I know.

The evidence: in the 2012 election, a total of 3,299 Silicon Valley employees gave $2,462,038 to Barack Obama's reelection campaign. In contrast, only 528 Silicon Valley employees gave Mitt Romney a total of $357,438. Sure, Mark Zuckerberg might throw a fundraiser for Chris Christie, but make no mistake: people around here are not voting Republican.

And they like to let you know that. That is why the CEOs of number of prominent Silicon Valley companies signed onto an amicus brief that was sent to the United States Supreme Court in 2013, in which they came out against the Defense of Marriage Act (DOMA), and in support of gay marriage. Those companies included Adobe, Amazon, Apple, Cisco, eBay, Facebook, Google, Intel, Intuit, Microsoft, Salesforce, Twitter and Zynga.

Why put their names out there like that? Because it's not just the views they hold; it's about letting people know that you are on the "right" side of an issue. Look at what happened when it was revealed that a CEO was against gay marriage; it took two weeks for him to lose his job. That had nothing to do with his suitability for the job, but all about the image of the company.

In a blog post earlier this year, Chris Sacca, most well known for being an early investor in Twitter, wrote a blog post called, "A few thoughts on race, America, and our President."

"We are a nation at war with itself. We jail our black men, and women, and boys. (Our Hispanic population isn’t far behind.) We punish our poor. We have militarized our police. We selectively uphold our Constitution. 'Justice for All' is a propagandist relic," said Sacca, before diving into some statistics regarding how many black people are currently incarcerated (hint: it's a lot).

My thoughts are with the victim's families in SC. Let us honor their lives by eradicating racism & removing the symbols & words that feed it.

Too often in America the legacy ideas and beliefs of the past are holding us back from the promise of the future.

My hope is that together we can convert hate & racism to peace & understanding around the globe. https://t.co/eaFa3jwuAV

I agree @MittRomney: Take down the #ConfederateFlag at the SC Capitol. To many, it is a symbol of racial hatred. Remove to honor victims.

My problem with this is not Butterfield's, or Cook's or anyone else's message; it's that all these are are more words. It's more talk for an ecosystem that could really use some action already.

Words are not enough anymore

Silicon Valley has a diversity problem. In that there is very little actually diversity, which became apparent when a slew of them released diversity reports in 2014.

Tech jobs at Twitter are 58% white, 53% at Facebook and a mere 35% at Yahoo. As for leadership, Twitter is 72% white, Facebook is 74% and Yahoo is 78%. And when it comes to non-tech jobs, meaning those working there but in other divisions, such as maintenance and the cafeteria, they are still majority white: 60% at Twitter,  and 63% at Facebook and Yahoo.

Amazon and Google did not break their employees down to tech and non-tech jobs; they just gave one big number. Amazon is 60% white, while Google is 61%.

Asians represent the biggest minority at companies. In fact, when you combine the white and Asian numbers together, whites and Asians dominate. Only 9% of the employees at Google and Facebook do not fall into one of these two groups. It's only 6% at Twitter, and 11% at Yahoo.

That obviously leaves Hispanics and African Americans really out in the cold.

Now, look, I'm not saying that these companies do nothing to help out minorities through philanthropy. Many of them have come to see the value of having a more diverse set of people working at their companies.

Apple, for example, recently announced that it would be partnering with the Thurgood Marshall College Fund, a non-profit that supports students enrolled in public, historically black colleges and universities (also known as HBCUs), such as North Carolina A&T State University, Howard University, and Young's alma mater Grambling State University. It also said that it donating $50 million to groups that promote diversity.

Intel also revealed its plan to fund programs that celebrate diversity, including the International Game Developers Association, the E-Sports League, the National Center for Women in Technology, the CyberSmile Foundation, the Feminist Frequency, and Rainbow PUSH.

In October, Facebook, Box and Pinterest announced that they had gotten together to launch a new mentorship program called WEST (Women Entering and Staying in Tech). The idea is to get more women interested in computer science, and to help them be prepared for the tech jobs of the future.

WEST will feature women who have technical jobs at all three companies, who will serve as one-on-one mentors. They will meet with mentees individually and as a group, in-person and online, over the course of a year. The program will officially launch in pilot mode this year.

But lets be honest here, there is one simple, very easy way for these companies to not just talk the talk on racism, but to walk the walk. That would be to actually start hiring the same people that they are so eager to champion.

Not only would that finally make their words mean something, but it would also help curb the impression that so many currently have of the Valley: an exclusive, closed off system that only rewards certain groups of people. It's time for Silicon Valley to start putting up or, frankly, shutting up.

VatorNews reached out to Slack and Butterfield for further comment, but the company declined to participate for this piece.

We will again be discussing the issue of diversity during Splash LA on Oct. 15th. You can learn about the event here. 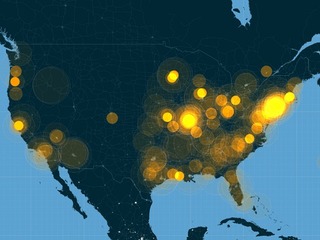 As Ferguson exploded, so did Twitter with 3.5M Tweets 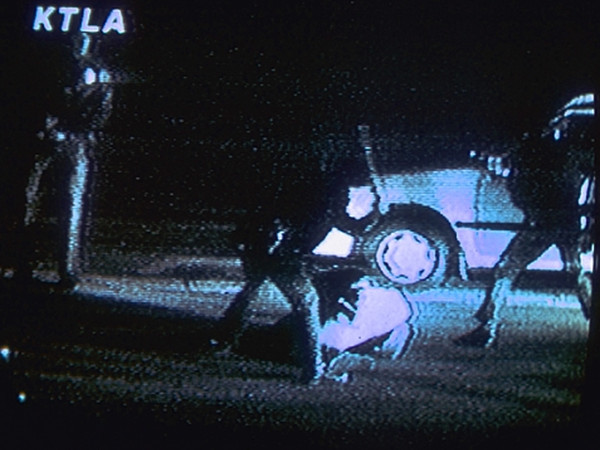 Mike Brown, Rodney King, and the power of social media 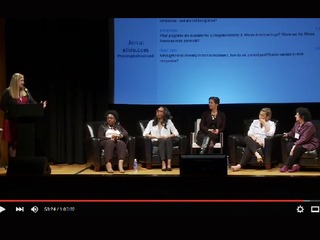