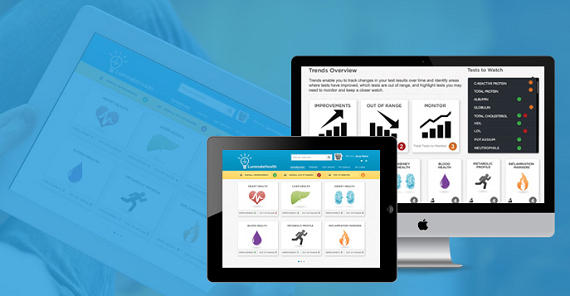 If any of you are unfortunate to have someone in your life with a serious or chronic illness, then you know how much of their time is taken up by not only doctor visits, but visits to the lab as well. There is constant testing, and retesting, and a seemingly endless stream of results. One thing that winds up happening is that the patient learns exactly what all of those numbers actually mean, simply because they have to.

For the average person, though, lab results are like looking at another language. To say that they aren't patient friendly is an understatement. Luminate Health, a patient portal for lab results and the winner of last month's first ever Vator Splash Health competition, wants to change that forever.

What is Luminate Health?

The company gives labs a first-of-its-kind digital platform for their patients to access and understand their lab results. Luminate Health is also helping these labs satisfy a major new federal rule from HHS, which now requires all US labs, commercial, specialty, and hospital labs, to provide patients with direct access to their lab results.

The company goes further than simply giving the result, though: it is developing algorithms to personalize information and make it increasingly relevant for individual patients, develop population health analytics, and aid healthcare providers in identifying patient risk, condition, and treatment areas.

The problem that Luminate is trying to solve is two-fold, Siddharth Sinha, co-founder and CEO of Luminate Health, told me in an interview. One is a big picture problem, while the other is smaller, yet equally important.

On the one hand there is the macro problem, which is that we are at the "beginning of a major shift toward patient-centric healthcare," he said. "It used to be provider-focused, and we are trying to be at the forefront of that shift by building products and services that enable patients to actively manage their own health. We are leveraging enormous amount of data to improve healthcare." 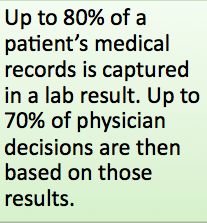 Looking at the big picture, Luminate is trying to help facilitate that shift of giving patients more control. And there is a lot that can be done on that front. On the micro level, though, Luminate is currently putting all of its focus on lab results, and "trying to give patients a powerful way to not just access their lab results but to make sense of those results."

"Up to 80% of a patient's medical record is captured in a lab result. Up to 70% of physician decisions are then based on those lab results, but patients in general have poor to no access to their own medical info," said Sinha.

"Health literacy is generally low or very poor, and when you couple those two things, and then see  how many decisions are based on those results, it's a major problem."

As to how the physicians themselves feel about patients having more information, and whether they might come to actually resent patients asking questions and potentially challenging what they say, apparently that has not been a problem at all so far.

"We have been very pleasantly surprised as to how physicians have responded. There is a large and growing body that is saying two things: first, that patients can get their hands on this information regardless, and in every other aspect of their lives, so they might as well get on board," said Sinha. "And, second, there are a large number of truly forward thinking physicians who believe it is really important for patients to have this information because it allows them to communicate in a much more meaningful way about their care once they have a baseline understanding of their healthcare."In fact, Luminate has found that physicians are actually equipping their offices with iPads, which patients can then use to access the service and have a better dialogue with their physician.

The US medical testing market was an $80 billion industry in 2014, and so there is a huge opportunity for Luminate in this space.

Luminate Health now counts a number of top-150 US labs among its customers, though Sinha was unable to name any of them for me at this time.

For Luminate Health, there are three potential competitors, though none offer a solution that is similar enough to pose a threat.

First there are in-house solutions from large labs, then there are electronic health record (EHR) services like Practice Fusion, and, finally, existing IT vendors.

"The similarities among all those three areas are that they're largely just digital read outs of same poorly formatted paper report," Sinha said. "They give an electronic read out, but that is the furthest they go. They might put a pretty color on it, but there is no context or understanding for the patient."

Luminate takes an "end-to-end patient centric approach" to the problem.

"We haven’t just created a beautiful user interface, we restructured lab result data to be more meaningful to the patient. Restructuring it to meaningful categories where patients can make improvements," he told me.

So had Luminate actually been able to calculate how much it has helped patients who have used it? Given that the product only launched in 2014, the company is still too young to have that kind of information.

However, Sinha could tell me that he has heard from physicians who have said that patients who use Luminate have been able to have deeper conversations about their own health, which they couldn't have had before.

"We seen a high level of engagement, which is really interesting because just slightly over 50% of our active users today are over age of 60, and a good percentage are over 70.Those are the people logging in frequently to understand what is going on," Sinha said. "Some were skeptical, and said that the people who would be the most frequent users of medical testing are going to be people who skew older, and that makes sense, since they are at risk and dealing with chronic conditions. But they might not be as tech savvy. That has not been the case. We built a meaningful product that is really engaging, even to difficult to reach demographics."

Sinha was previously the co-founder and VP of Product Development at a cleantech insulation startup. He also spent a year and a half as a consultant, where, he said, part of his work was in the healthcare space.

"It allowed me to see firsthand how many different large problems areas, complex problem areas, there were. That certainly that got me going. Having done a startup before that, knew I wanted to come back into the startup world and launch somwthing again. I and our two co founders were passionate about social causes."

"We like to focus on major societal issues, creating meaningful products and services, and meaningful businesses."

It is Madan, though, that Sinha says has the most experience in the healthcare field. Prior to Luminate Health she worked in Commercial Development at Genentech, and previously worked at Google. Sinha credits her time at Genentech as being the real spark for Luminate.

"They often times would bring in patients on therapies to share their stories," he explained, and one in particular really stuck out,

A woman, who was 32 at the time, told the story of around two earlier: she work up one morning and found herself too fatigued to take the trash out. She went to nine different doctors over the course of two years trying to figure out what was wrong, until she finally found a specialist who diagnosed her with what turned out to be a rare autoimmune disorder.

"One of the things that resonated is that if she had just been able to have all of her info with with, and make some sense of it, it would have been much more valuable to those nine different physicians. And they possibly could have gotten to it much sooner," Sinha explained.

"It was a powerful story and from there we cast a wide net and heard the signals coming back really loud. People want to have this information in their hands. It is critical, when it comes to healthcare but it is so difficult to start making sens of it and to be active participants."

The future of Luminate Health

The services that Luminate is providing can obviously help people now, but what are the ultimate goals of the company?

"Looking down the road, five to 10 year,s  we believe fundamentally that all medical information should be accessible. One of the reasons we started with lab results is that they are such a large part of medical records, so we already provide context and understanding for a broad set of lab tests," Sinha said. "We want to be able to focus on specialty areas, such as endocrinology, genetics, and oncology. That's not there today, but we should be able to provide this type of lab work as well."

The company also wants to, eventually, potentially work with the big chains, such as Walgreens, CVS and Target, which are investing in their own retail clinics.

Luminate Health provides labs and healthcare providers with a first-of-its-kind, digital platform for their patients to access and understand their lab results. The company is a SaaS provider, and is partnering with commercial, specialty, and hospital labs across the US. Luminate Health is also helping these labs satisfy a major new federal rule from HHS, which now requires all US labs - commercial, specialty, and hospital - to provide patients with direct access to their lab results.

Luminate Health now counts a number of top-150 US labs among its customers, and continues to see a very positive response to its product from both patients and physicians.

Luminate Health is focused on leading the shift toward patient-centric healthcare by engaging patients to actively manage their own health, and leveraging the growing volume of available health data to improve patient care and outcomes.

The company is venture-backed, and includes KEC Ventures and several prominent healthcare-focsed angels as investors. 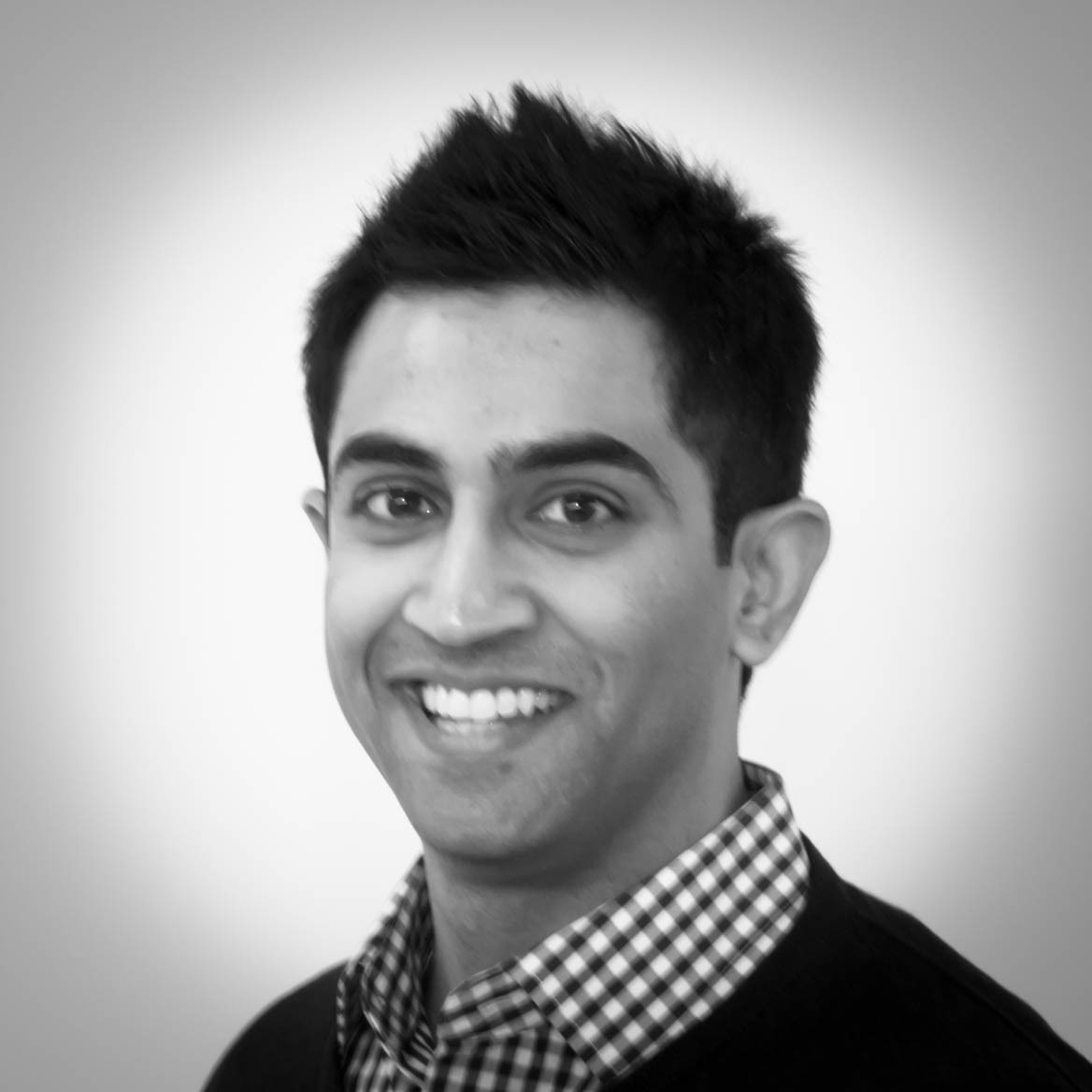 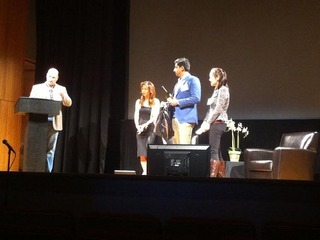 The winner of Vator Splash Health is Luminate Health!