Could Thiel be the man who leads the revolution that finally fixes the education system? 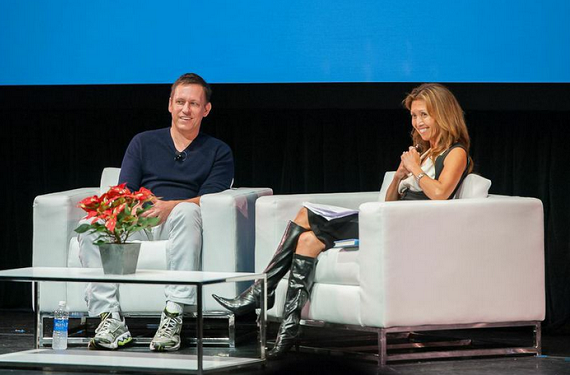 Not only does Peter Thiel have a lot to say about a lot of things, he has an unique way of expressing his views. He was able to do that on a number of topics during his one-hour chat with Bambi Francisco, Founder and CEO of Vator, at the inaugural Post Seed conference, hosted by Bullpen Capital, Venture51 and Vator, this week.

In fact, Thiel's talk was so riveting, Strictly VC writer Connie Loizos wrote: But in many appearances that Thiel made this fall promoting this new book, "Zero to One," Thiel has shown another side of himself: talented raconteur."  One observer said it was the best interview he'd seen Thiel do.

At Post Seed, one of the topics he covered was education, which he has publicly criticized. Hence, the creation of the Thiel Fellowship, which is a $100,000 grant given to students to skip college for a couple of years in order to start a business instead.

At Vator's Post Seed Conference on Tuesday, Francisco asked him to expand upon that, specifically if the education system is the Catholic Church, who is the Martin Luther, a.k.a. the man who will lead the education reformation?

"I don’t want to push the analogy that far!" Thiel jokingly said in response, before giving a more serious answer.

"I would say the main point of the analogy is it's a uniform, unitary institution. You get a diploma, you get a degree from college, or you go to hell. Sort of all these analogies: the costs keep going up, there's a certain amount of corruption. What I find very implausible is the idea that there's any reform from within," he said. "Maybe that happens a long time from now but I think when institutions get to a certain point of corruption, when you have a trillion dollars worth of students loans, that's a first approximation that they paid for a trillion dollars worth of lies about how good education is, you're dealing with an incredibly corrupt institution at the core."

That corruption, he noted, is at least part of the reason he is "somewhat skeptical of a lot of the education software companies people are trying to build," simply due to the fact that they are "predicated working on with these institutions."

He believes that the institute of education is beyond fixing, though.

"Whenever you have something that's a little bit broken, you can envision building something that works and fixes it and improves things. When things are incredibly broken it's very ambiguous. It could mean that there's room for massive improvement, and it could also mean massive resistance to any sort of change," said Thiel. "The reform will come from outside the system and the question people always have is, 'What does the next education system look like? What will it be?' And I think, like what happened to the Catholic church post 1500,  I think there isn't going to be a single new institution that will replace it. And this, of course, was the disturbing message of the 16th century was, the institution wasn't going to save you. You have to figure out how to save yourself. And in a similar way there's no education institution that will save you. Young people have to figure it out on your own. And that is the last thing anybody wants to hear."

A little later on, a member of the audience asked Thiel his thoughts on education when it comes to much younger people, specifically those under five years old, and how we can help them prepare for the world ahead.

"There's probably a lot that one could do. I would say one of the challenges for 0-5, or K-12, is that it's all distorted because people are not being prepared for the future world. They're being prepared for college. And so 0-5 the temptation when you take your bearings is helping kids getting into kindergarten. K-12, you're evaluated by whether you're getting your kid into the right colleges. And that's probably the single biggest distortion. I don’t know how easy it is to fix that because that is, in still what the mindset still is and the education bubble isn't going to end anytime soon because people are too scared and they don't see any alternative."

At the end of the interview, Paul Martino, Partner at Bullpen Capital, one of the hosts of Post Seed, commented more about how Thiel is one of the few making everyone rethink education, upon which Francisco responded, "I guess Peter is the Martin Luther," drawing some laughs and applause from the crowd.

(Full disclosure: Thiel is an investor in Vator) 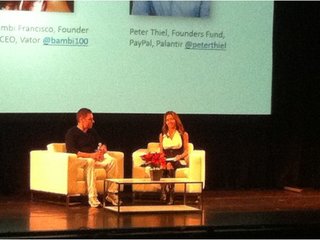