The company, which already raised over $233M in 2014, received a personal investment from Ratan Tata 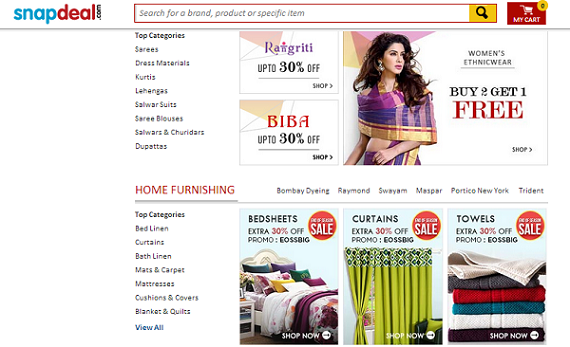 If there is one space that you can is super hot space right now, it would have to be Indian e-commerce. There are just huge amounts of money being poured into it at the moment.

Just last month, Flipkart, India's largest e-commerce company,  raised an absolutely massive $1 billion funding round, the second biggest round ever, behind Uber's $1.2 billion. So, not to be outdone, one of its competitors, Snapdeal, has just raised a new round of funding as well.

The Indian online marketplace has received a personal investment from Ratan Tata, the chairman emeritus of Tata Sons, the holding company of Tata conglomerate, it has been reported by Forbes. The amount of the investment is undisclosed.

The most impressive thing about this new funding is that it is the third time Snapdeal has taken in new funding this year.

First eBay, which made a $50 million investment into the company in April of last year, invested another $133.77 million in Snapdeal in February, That was then followed by another $100 million from Temasek, BlackRock, Myriad, Premji Invest and Tybourne in May. In all, Snapdeal had raised over $435 million in funding even before this latest investment.

Also of note in this story is who the investor was. He may not be well know in the United States, but Tata is a well-known and highly regarded figure in India. The fact that made the personal investment is a good sign for Snapdeal's future.

The Tata Group has $103 billion in revenue, with interests in such industires as spanning steel, software, airlines and tea. Snapdeal has just tied up with the Tata Conglomerate’s Tata Value Homes to sell affordable homes online, the first deal of its kind in India.

“An investment by a legendary and respected figure like Mr. Tata is an excellent validation of our focused strategy on building a long term enterprise and marks the start of a very important phase for the company," Snapdeal co-founder and CEO Kunal Bahl told Forbes.

It was also reported on Tuesday that Snapdeal had entered into a partnership with Tata Value Homes, an affordable housing company.  The partnership will allow the company to be able to sell apartment units in cities that include Bangalore, Chennai, Pune, Mumbai and Ahmedabad.

In April 2012, Snapdeal decided to abandon the daily deals model, and became an online marketplace, in the vein of eBay and Amazon.

In addition to all the funding that has happened this year, in May Flipkart bought Indian online fashion retailer Myntra in a deal worth $400 million.

VatorNews has reached out to Snapdeal for comment. We will update if we learn more.