Pinterest's entire model is based around organization, by putting pins in the right category to help people get the most out of them, and to help the company serve up better recommendations. Once the company is able to do that, it can better serve ads and monetize those users. But, again, it all comes down to getting the right content in front of the right people.

To up its game in that department, Pinterest has now purchased visual organization tool Icebergs, it was announced via a blog post on Iceberg's homepage on Wednesday.

While no financial terms of the deal were disclosed, it does seem as though this was an acqui-hire, as it as was revealed that Icebergs, along with its mobile app and services, will be shutting down at the beginning of September. Icebergs is allowing its users to export their data in two different ways: either to Dropbox or as a .json file, before it completely shuts down in about a month from now.

The two co-founders of Icebergs, César Isern and Albert Pereta, will be joining Pinterest. Pereta is going to be a product designer and Isern will be a product manager.

Founded last year, the Barcelona-based Icebergs a service for organizing visual content in the cloud. It allowed users to save, organize and collaborate around their projects. Users were given tools to save and content, including images, articles and videos to help them get inspired. The service acted much like Pinterest does, except that Iceberg collections were private instead of public. It was used by "hundreds of thousands" of users.

The team that will be joining Pinterest will be putting those organizational skills to use at their new company.

"We are thrilled to be joining forces with the talented Pinterest team in San Francisco. Pinterest is a visual discovery tool people use to discover, save, and act upon the things they love, which makes it a perfect home for our experience in product and design, and in building Icebergs," Isern and Pereta wrote.

"On Pinterest, there are tens of millions of people using the site to discover more than 30 billion Pins every day, and we can’t wait to use what we learned building Icebergs to help make their experience even better."

"Pinterest is a visual discovery tool people use to plan the everyday projects in their life. As we build products that help people discover, save, and do the things they love, we’re also focused on growing a team of world-class talent," Malorie Lucich, a spokesperson for Pinterest, told me. "For years, César and Albert have been building technology to improve online visual curation and organization of projects, and we’re excited for them to join us."

Pinterest has raised over $760 million, most recently a $200 million round in May, at a $5 billion valuation. The company is frequently mentioned as potential IPO candidate in the next few years.

This is Pinterest's second acquisition this year. In January it purchased visual search technology company VisualGraph. 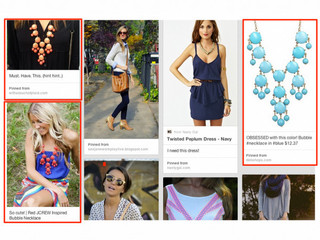