Twitter's user growth is falling and it can't get up

New eMarketer report shows growth slowing to 10% by 2018, with most new users coming from Asia 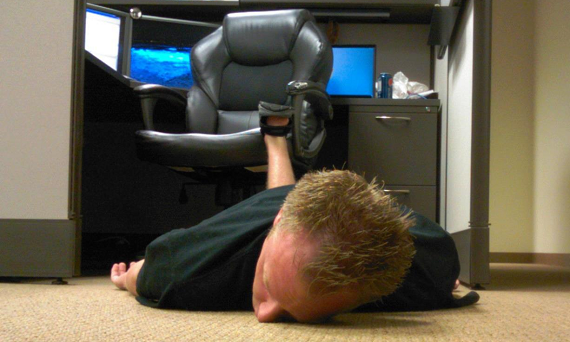 Twitter, which had its IPO back in November, has released only two quarterly earnings reports in its short life as a public company. Both times the company's stock got absolutely slammed over growth that was slowing and not meeting expectations.

As much as CEO Dick Costolo wants to paint it as something temporary, slowing user numbers are a big, big problem for the company, which has seen its stock price get decimated since February.

Sadly it does not seem to be one that is going to go away any time soon as a new report out from eMarketer on Tuesday shows Twitter's user growth slowing to a crawl over the next four to five years.

This year, Twitter is expected to see its user numbers grow by 24.4%, down from 30.4% last year. And it only gets worse from there: while the company will have roughly 400 million users by 2018, by that point the company's growth will have slowed to a mere 10.7%. 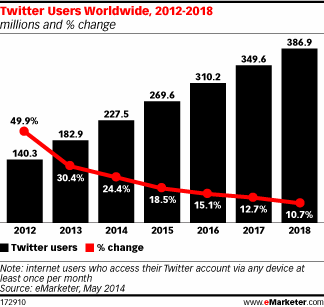 That means that, including this year, Twitter has five years left of double digit before it really started to peter out. In other words, it is highly unlikely, if not impossible, for the company will ever be able to match Facebook's 1.25 billion active users. In fact, it will be lucky to get half of that.

There is even worse news for Twitter: eMarketer all but says that the company over-inflated its monthly active users (MAUs) numbers in its last earnings report. According to Twitter, they grew 25% year to year, to reach 255 million. Not so, says eMarketer.

"eMarketer's estimates identify how many individual users log in or access Twitter each month within the calendar year across the world," eMarketer wrote. "Our figures differ from Twitter's reported figure of 255 million monthly active users in 2013 because we rely heavily on consumer survey data to weed out business accounts, multiple accounts for individual users, and other sources of potential double-counting."

Despite the slowdown, Twitter is obviously going to keep growing every year. That is the other interesting aspect of the report: where exactly are those new users are going to come from?

Instead growth will be coming from the Asia-Pacific region, specially in countries like India and Indonesia, which will both be in the top five Twitter populations by this year. Indonesia has seen growth rates of 76.8% and 76.3% over the last two years, and will grow another 61.7% this year to get to 15.3 million users.

In all, eMarketer expects the Asia-Pacific region to account for 40% of Twitter's global user share by 2018, more than double what it will be in North America. Right now it is still the largest in the world, but by a much smaller margin. 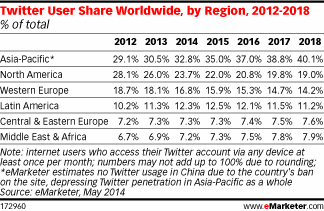 That's all well and good, but it will likely do nothing to encourage investors who have already made their dissatisfaction about Twitter's direction known: On February 5th, the day that Twitter revealed its first earnings report, the company's stock ended the day at $65.97. The very next day it was down to $50.03.