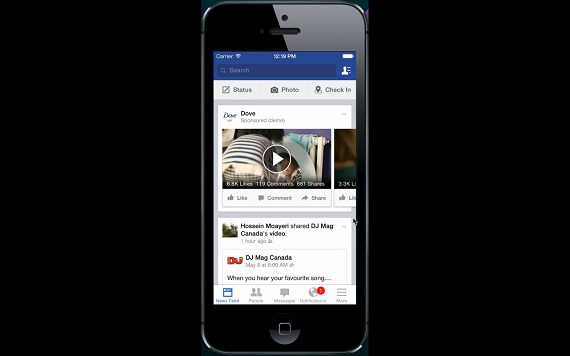 After months of  rumors and tests, Facebook's long awaited 15 second video ads in NewsFeed finally premiered in March. And while its only been a couple of months, and the company's COO Sheryl Sandberg even cautioned last month not to expect big 2014 sales, there is already one big sign of their success: the ads are already being launched overseas.

Facebook revealed on Tuesday that it will be bringing the ads in at least seven new markets: Australia, Brazil, Canada, France, Germany, Japan and the United Kingdom.

Each video ad is 15 seconds long, and begins playing without sound, as to not become intrusive. They will stop if the user scrolls past, but if they click on the video it will expand into full screen and play with sound.

Perhaps because of the potential interference and disruption they could potentially cause for users, Facebook has been extra cautious about rolling out these ads, and the company will continue that trend in the new countries as well: they are only being opened to a "limited group of advertisers" in each of those seven markets.

"We’ll roll out Premium Video Ads slowly and monitor how people interact with them. This limited introduction allows us to concentrate our efforts on a smaller number of advertisers with high-quality campaigns to create the best possible experience on Facebook," the company said. "People can expect to begin seeing these new ads over the next few months."

Rumors of Facebook video ads first popped up in December of 2012, and the company first began testing out auto play videos on News Feeds in September of 2013.

The company revealed in December that that those videos were successful enough in the three months of testing to warrant putting them in the hands of advertisers. The video tests resulted in an over 10% increase in people watching, liking, sharing and commenting on videos.

The first video ad test was a partnership with Summit Entertainment and Mindshare the movie called Divergent.

VatorNews has reached out to Facebook to find out how successful the ads have been in their first two months, but the company was unavailable for comment at this time.

In addition to the expansion plans, Facebook also revealed that it was introducing new metrics for its ideo ads, including how long the video was viewed, how many times it was viewed in total and how many times at least 95% of it was watched.

"Previously, as a Page owner, you could only see how many people started watching your video," Facebook said. "These new metrics are designed to help you learn what’s resonating with people and determine how to more effectively create and promote your videos on Facebook."

The new metrics are also going to roll out over the next few weeks.