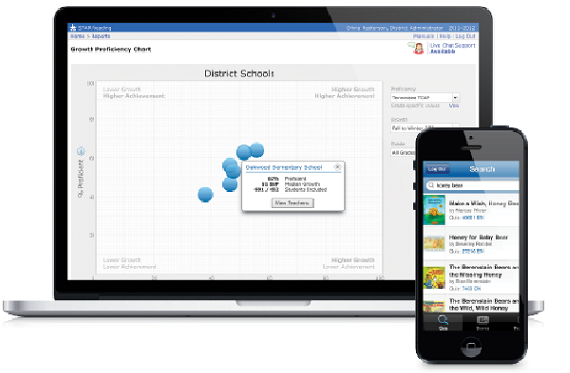 There has been a bit of a shakeup in the ed-tech world on Thursday, as one of the biggest companies in the space now has a new owner.

Less than a month after Google Capital made a $40 million investment in order to take a minority stake in Renaissance Learning, the K-12 assessment and learning analytics company announced on Thursday that it has been acquired by private equity investment firm Hellman & Friedman for $1.1 billion.

The transaction is expected to close in the second quarter of 2014.

This is just the latest chapter in the rocky history of the company. After it was founded in 1986, it went public in 1996, before being bought by British company Permira for $455 in 2011 after a lengthy battle for control of the company. After the purchase it was taken off of the public market.

Now Permira has decided to unload the company as well, more than doubling in its initial investment.

So where does this leave Renaissance's newest investor, Google? The investment last month valued Renaissance Learning at $1 billion, so there's no doubt that Google would have liked to have seen Renaissance take longer to sell, in order for it to have gotten a bigger return on its investment.

As such, Google Capital is expected to remain as an investor in Renaissance Learning going forward.

“Renaissance Learning is an outstanding company that has been helping educators accelerate student learning for decades,” Tarim Wasim, Managing Director at Hellman & Friedman, said in a statement.

“We believe strongly in the mission and are excited to help grow Renaissance’s impact globally through continued investment in products that make a difference in the classroom.”

Renaissance provides educators with cloud-based assessment, teaching and learning solutions. The company delivers insights into what students know, what they like and how they learn, and adapts electronic tests in real time accordingly.

Its tools include STAR assessments, which can assess a student's ability in less than 20 minutes. In August of 2012, Renaissance acquired the K12 e-reading platform, Subtext in order to complement the company's Accelerated Reader program for independent reading in U.S. schools.

The company's technology is now used in over one-third of U.S. schools and more than 60 countries around the world.

“Today there is an incredible opportunity to harness data to help teachers unlock the learning potential of their students,” Jack Lynch, CEO of Renaissance Learning, said in a statement. “Partnering with Hellman & Friedman will give us additional tools and resources to continue building out our capabilities, broadening our market reach, and ultimately helping teachers transform education.”

Renaissance will remain in its current headquarters in Wisconsin Rapids, Wisconsin.

Renaissance Learning could not be reached for further comment on the deal.