The Vizify team will be coming to Yahoo, platform will be shutting down 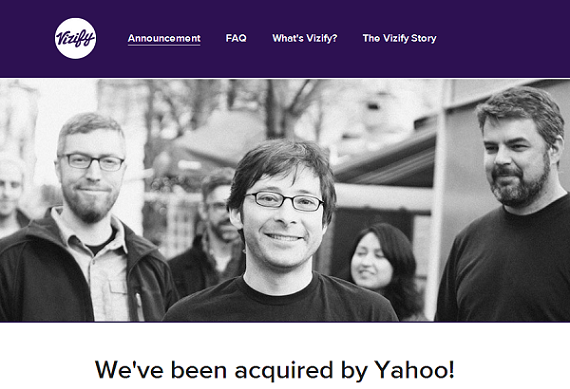 Anyone who thought that Yahoo's acquisition streak might slow down was very much mistaken.

The company has purchased visual identity platform Vizify, the company announced in a blog post on Tuesday. No financial terms of the deal were disclosed.

This seems to be another acqui-hire by Yahoo as it was revealed that, as per the acquisition, Vizify will be closing its doors.

As of Tuesday, Vizify is no longer accepting new users. Those who have a current paid plan will be getting a full refund for everything that they have paid Vizify, while Premium customers who registered a domain through Vizify will be provided with instructions so they can assume ownership of their domain, at no cost to them.

Bioholders, both free and paid, will be given instructions on how to to opt-in to “archive” a snapshot of their current bio. Those bios will remain live at the same URL through September 4th. users have until April 7th to opt-in to archive their bio.

Talks between Vizify and Yahoo have been going on since last summer, with the companies talking "about the ways this more visual approach to data can inspire and entertain."

As our conversations progressed, we realized we’d found a partner who shared our passion for user experience, design, and visualizing information. Ultimately, we just couldn’t say no to the opportunity to bring our vision to the hundreds of millions of people who use Yahoo every day," the Vizify team wrote.

What exactly the Vizify team will be doing at Yahoo remains unclear right now. All the team said in the post was, "we can’t talk specifics just yet, but we’re excited to bring a more visual approach to data at Yahoo."

Update: A Yahoo spokesperson has confirmed to VatorNews that the five person Vifizy team will be joining its media product organization in San Francisco.

"Yahoo has acquired Vizify, a company that turns your social media data into interactive infographics, videos, and more. We have found in Vizify a company that shares our passion for visualization technology and the user experience," the spokesperson said.

Founded in 2011, Vizify "turns your social media data into interactive infographics, videos, and more." Basically, the company took what you did on your social media accounts and turned it into something visual, like a card or video.

The company raised a total of $1.46 million, including a $1.4 million seed round in January 2012 from investors that included Jonathan Sposato, Tim Draper, Bill McAleer and Matt Shobe, among others.

This is Yahoo's eighth purchase so far this year.

Most recently Yahoo bought Distill, a provider of a video interviewing and scheduling service for recruiters.

Increasingly, people looking to learn more about you are looking you up online. Vizify transforms your social media content into a comprehensive graphical bio that highlights the best of you to people curious about you.

Our mission is to help you build your personal brand so you can impress potential bosses, clients, or even dates.