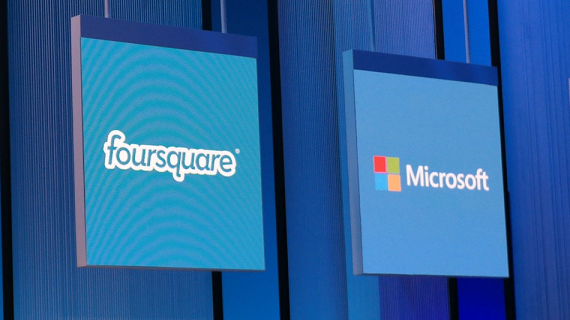 As if Microsoft needed even more news to come out on today, now word is out about a new investment, along with a new partnership, for the Internet giant.

Microsoft will be licensing the places database of check-in service Foursquare, it was announced in a blog post from Foursquare, put out on Tuesday.

"Every time someone uses Foursquare, our real-time map of the world gets better. Crunching all that data allows us to learn about places, analyze real-world trends, and build the most powerful real-time recommendation engine in the world," Foursquare wrote.

"And today, we’re proud to announce Microsoft is licensing our places database for use in their products and services, too."

What this means is that when users go onto Microsoft devices, which are powered by the Windows and Windows Phone operating systems, and products, such as Bing, places will be "enhanced" by Foursquare. It will provide "contextually-aware experiences and the best recommendations of any service in the world."

Along with the partnership, it was also revealed that Microsoft had put money into the company. Though the amount was not disclosed in the blog post, but Brendan Lewis, Head of Communications at Foursquare, has confirmed to VatorNews that that it is a $15 million investment.

The new money will be added to the $35 million the company raised from DFJ Growth and Capital Group in December, bring that total round to $50 million.

"Like we said in December, we will use this capital to further our technology and monetization efforts begun in 2013," Lewis said, "Additionally, we will continue to hire engineering and sales positions, and fuel international expansion."

The partnership with Microsoft underscores the impressive turnaround that Foursquare has seen in the last year.

Less a year ago Foursquare was taking on debt just to stay alfoat; in April of last year it was forced to take on $41 million worth of debt just to buy time while it figured out what to do.

The solution seems to have been its self-service ad platform, which it opened up to a select group of small businesses. It then expanded it to around one thousand businesses in July before opening it to small businesses all around the world in October.

It allows  for more small businesses to put their ads up on the network on their own, without having to go through the hassle of dealing directly with Foursquare. Through the platform, the owner can see how many people saw the ads, how many times it was tapped on and, by extention, how many of those people came to the store.

Founded in 2009, the New York-based Foursquare says that it has a total of 45 million users in its community. It has now raised a total of $142 million.