Bill Gates no longer Chairman of the Board, will instead be an advisor on product direction

It has been rumored for a while now that Microsoft would be naming Satya Nadella as its new CEO. Now the company has finally made it official.

Nadella, who has been working at Microsoft for 22 years, was most recently the company's executive vice president of its Cloud and Enterprise group.

During his time at the company, Nadella has been credited with helping to spearhead Microsoft's shift toward the cloud, as well as the development of one of the largest cloud infrastructures in the world supporting Bing, Xbox, Office and other services.

"Satya is a proven leader. He’s got strong technical skills and great business insights. He has a remarkable ability to see what's going on in the market, to sense opportunity, and to really understand how we come together at Microsoft to execute against those opportunities in a collaborative way," he wrote.

"I have worked closely with Satya for many years and I have seen these skills many times. He is not alone, though. Our Senior Leadership Team has never been stronger, and together this group will drive us forward."

In addition, Microsoft also confirmed another report, that Gates will no longer be the Chair of the Board of Directors, a position he had held for 33 years. From now on, Gates will be taking on a new role on the Board as Founder and Technology Advisor. Essentially that means he will be spending his time helping Nadella "in shaping technology and product direction."

“Satya is clearly the best person to lead Microsoft, and he has the unanimous support of our Board,” Thompson said in statement. “The Board took the thoughtful approach that our shareholders, customers, partners and employees expected and deserved.”

Nadella will be Microsoft's third ever CEO, after Bill Gates and Ballmer.

Gates was CEO from 1975 to January 2000, when he handed the reigns over to Ballmer. Ballmer announced in August of last year that he would be stepping down as CEO after the board of directors, and Thompson in particular, told him he was too slow.

The candidates for the new Microsoft CEO seemed to come down to two candidates: Ford Motor Company CEO Alan Mulally and Satya Nadella, executive vice president of Microsoft's Cloud and Enterprise group. Aftyer Mulally publicly stated that he would not accept the position, reports began appearing that Nadella was all set to take the job.

“Microsoft is one of those rare companies to have truly revolutionized the world through technology, and I couldn’t be more honored to have been chosen to lead the company,” Nadella said in statement.

“The opportunity ahead for Microsoft is vast, but to seize it, we must focus clearly, move faster and continue to transform. A big part of my job is to accelerate our ability to bring innovative products to our customers more quickly.” 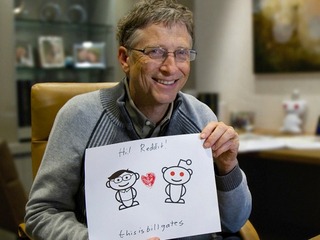 Bill Gates to take a more active role at Microsoft?