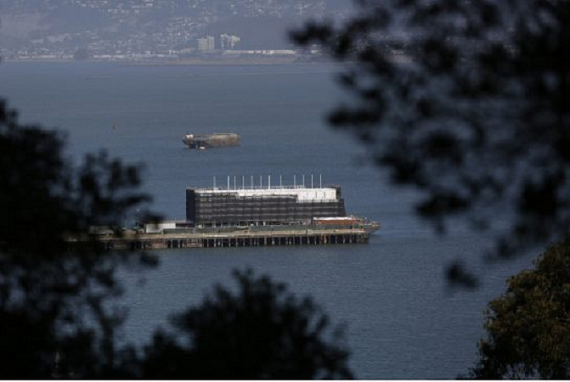 As you've probably heard over the past week or so, Google is building mysterious barges in the San Francisco bay, which have had people speculating wildly about what they might be for. Most people figured that it would be a data center, but with Google, who knows what it could actually be!

Remember, this is the company of the "moonshot projects."  Whether it be an attempt to connect the entire world to the Internet by using balloons, or a car that can drive itself or a new piece of wearable technology that is meant to reshape how we view the world, or a new company that is meant to stop us from aging, Google does not often shoot small.

This time, however, it might be a bit of a letdown for some people.

The barges are not some earth-shaking, life-changing project; they are going house luxury showrooms and a party deck for Google to promote its new products, notably Google Glass, it was reported by  CBS' San Francisco affiliate KPIX on Thursday.

The project has reportedly been in the works for a year now, under the personal director of Google's co-founder Sergey Brin.

The building is meant to be easily taken apart and reassembled, as it is made out of 40-foot interchangeable shipping containers that allow it to easily be sent, either via train, barge or truck, to anywhere in the world.

Think of it as basically a roaming Apple Store that can pop up anywhere it needs to be. I can definitely see the company making a big deal out of the road show, promoting each new stop for the building a big event for that city. Ok, this is all starting to sound kind of cool, even if it is not the "we can let you live forever!" kind of cool.

The bottom three floors of the building will be luxury showrooms, which "can be outfitted with chrome features and floor lighting." There will be a party deck above, which will have bars and lanais for its customers.

When exactly this whole thing will get off the ground is kind of up in the air now, though, due to how it has been designated by the Coast Guard. The building has been called a “floating vessel," and it therefore has certain safety standards to comply with.

What this all comes down to, it seems, is Google wanting to promote the release of Glass with a big, splashy event. Obviously this will appeal to its most well to do users, with the thought being that if people see Glass as something exclusive, and high end, it will make them want it more.

And that may be true for some, but given the price of Glass, and all of its accessories right now, I'm not sure how many people will actually be able to afford to take part in the experience.