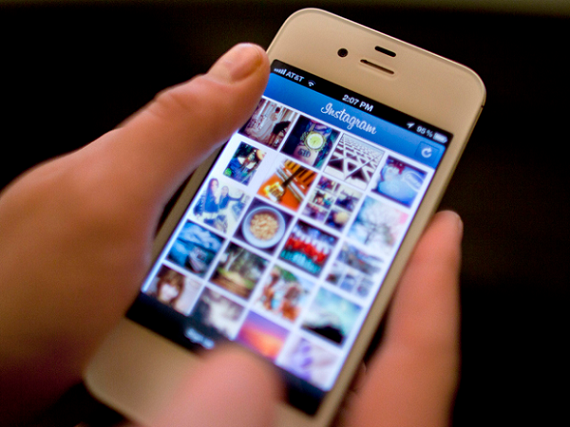 You know what I love? Like, really love? Those pictures that people are posting on Facebook and Instagram all the time of the food they are about to eat. Also, point of view shots of someone's feet in the sand on the beach. I swear that those kinds of pictures take up about half of my Facebook feed. The other half: pictures of weddings and babies. No joke. It's ridiculous at this point.

And it's only going to get worse, since picture and video postings on the Internet, both original and shared, are on the rise.

More than half of adults that are using the internet are now "creators," meaning they post original pictures and videos, according to a new study out from Pew on Monday. That number is up from 46% last year.

Pew also found that just under half, 47%, are "curators," meaning that they find pictures online and then repost them for all to see. These include platitudes and inspirational sayings designed to help you get through the day, often accompanied by a picture of a Peanuts character on them. Or a puppy.

That is up from just 41% who did this last year.

For now, picture creation far outweighs video. 52% of adults are creating their own photos, which is double the number that are making their own videos. Both numbers are up roughly the same percentage from last year. 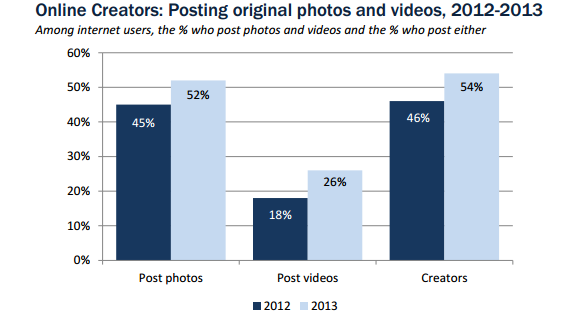 Half of men are posting some type of original content, compared to 59% of women.

More interestingly, though, is who is benefiting from this rise in the need to constantly share everything we do and see. Pew singles out two companies: Snapchat and Instagram.

The study found that 9% cell phone users are on Snapchat, and 18% are on Instagram. This is the first time that Pew has asked about either of these apps, so there is no way to know how fast they are growing.

Surprisingly, there is no mention of another popular creation app: Vine, which had 40 million users as of August. But that might be because Vine is exclusively a video-creation app, while both Snapchat and Instagram both include photo and video capabilities; Instagram debuted its own video feature in June. Still, it seems like a bit of an oversight not to include it.

So how much have Instagram and Snapchat been benefiting from more people being comfortable with creating and sharing photos and videos? A look at their most recent numbers tells the whole story.

Instagram, which was bought by Facebook last year, recently announced that it reached 150 million monthly users. Snapchat, meanwhile, is also on the rise, stating last month that its users were sending 350 million snaps every single day, up from 200 million in June.

Snapchat, which raised $60 million, might now be raising another round, this time in the hundreds of millions at a $3.5 billion valuation.

Btw, am I the only one who thought of this while reading this study?